Boycott in place since 2006 over rights abuses has deepened unemployment and economic weakness, government claims. 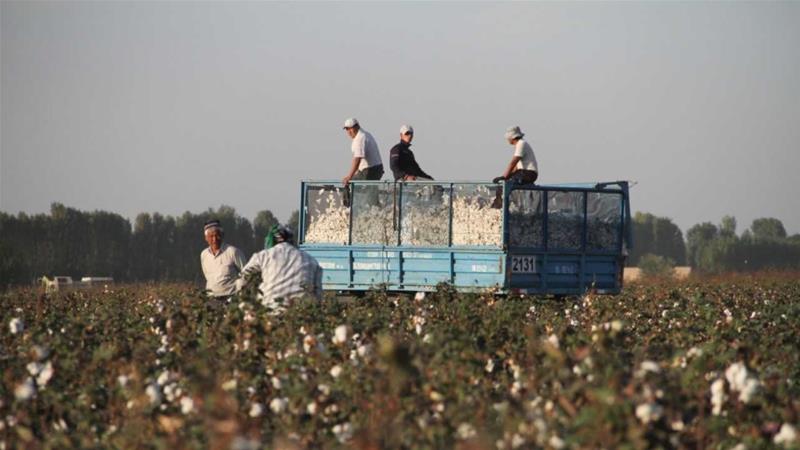 As the coronavirus threatens to weaken Uzbekistan’s economy, the country is calling for a boycott of its cotton to be lifted.

Nozim Khusanov, minister of employment and labour relations, issued an open letter to the Cotton Campaign on Thursday, requesting the organisation abandon a boycott on Uzbek cotton, in place since 2006 over a long-established state-sponsored system of forced labour.

According to the letter, since the country’s lockdown began, nearly 150,000 citizens have lost their jobs and more than 200,000 Uzbeks have fallen below the poverty line.

The ministry claimed that 140,000 migrant workers have returned home without a source of income.

Since the Soviet period, Uzbekistan had used forced and child labour in its vast cotton fields.

After rights groups intervened, foreign governments, companies and investors pledged not to source textile products originating in the country. To date, more than 300 global companies have joined the boycott.

When the reformer President Shavkat Mirziyoyev came to power in December 2016, he assured his commitment to ending forced labour and introducing private ownership in agriculture. A cluster system of private enterprises is expected to gradually take over from the government as the sole cotton producer.

According to a recent International Labour Organization (ILO) report, during the 2019 harvest season 102,000 people were in forced labour in Uzbekistan. However, it said that the practice is no longer systemic.

“Forced labour has been illegal for a number of years, people are given fines for forcing others, the fines were also increased tenfold,” Jonas Astrup, Chief Technical Advisor for the ILO, told Al Jazeera.

“What is changing now is that they are introducing criminalisation of forced labour and this is something that ILO has recommended for a while.”

While some groups disappeared from the cotton fields early on, including school pupils, students, educational and medical staff, local administration workers, the army and even some bank employees continue to dot the fields during harvest seasons.

The government’s letter to the Cotton Campaign on Thursday said: “Uzbekistan’s textile sector is one of the country’s leading sources of employment. In textile production alone, nearly 7,000 enterprises employ more than 200,000 workers, whose incomes support the livelihood of 1 million of our citizens. Our preliminary assessment suggests that the end of the cotton boycott could double overall exports of Uzbek textiles – growth that would create much-needed jobs.

“Importantly, the government of Uzbekistan is not seeking an end to your important work. We would like to continue to work collaboratively as we enter this new chapter of reform, drawing on your expertise to consolidate the progress made in eliminating forced labor, to support ongoing monitoring efforts, and to assist in the introduction of sustainability and social responsibility commitments across the value chain.”

While lifting the boycott might ease some of the burden on the economy, critics claim it is too early to judge whether the government’s long term commitment to reform is genuine.

The co-founder of the Cotton Campaign and former US Deputy Assistant Secretary of State for Democracy, Human Rights and Labour, Bennett Freeman told Al Jazeera: “The issue is less whether to end the pledge – but when and how – and above all, how ending it can become a catalyst for responsible sourcing and investment in a reforming Uzbekistan.”