The UK has been witnessing a warm and bright spell of weather in recent days. But according to the Met Office, Wednesday is expected to be the hottest day of the year before thunderstorms make their way to some parts of the UK on Thursday. Tuesday is expected to be a bright sunny day for many, with highs of 26C possible in London.

Wednesday is expected to be a bright sunny day to start, with some clouds in parts of Scotland and Northern Ireland.

Oli Claydon, spokesman for the Met Office, told Express.co.uk the Met Office are expecting the warmest day of the year on Wednesday.

Mr Claydon said: “We’re expecting the warmest day of the year so far, with 27 to 28C possible in the South East. 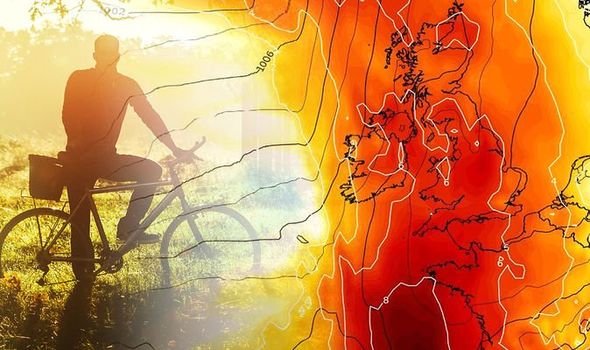 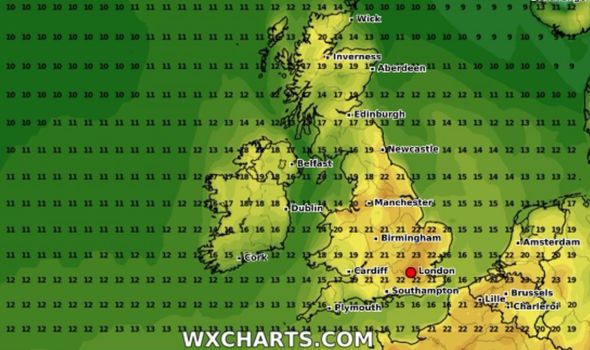 “There is also a small chance of potentially reaching 29C.”

By Thursday however, some regions of the UK could see thunderstorms with potentially heavy rainfall.

Mr Claydon added: “As we go into Thursday there is a cold front approaching from the east but it fizzles out mostly, but what that will mean is by the start of Thursday morning there will be a little bit of rain moving into parts of Northern Ireland and the west coast of Scotland. 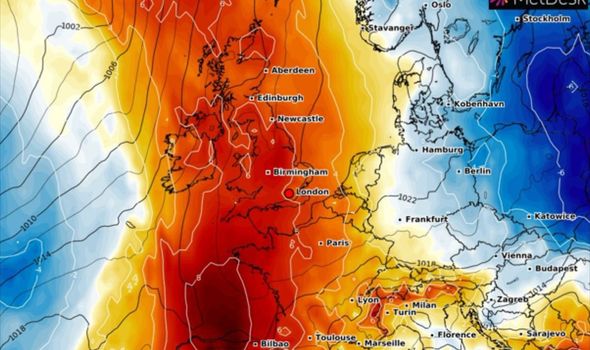 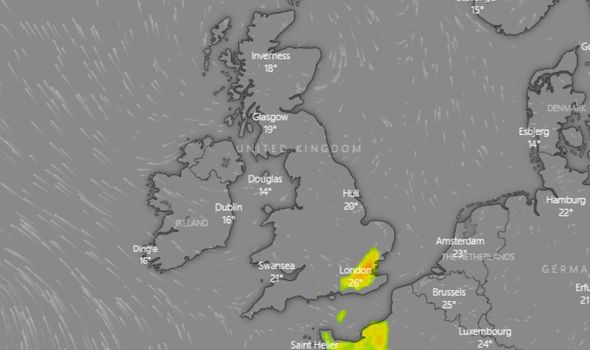 “And it will also bring some further cloud into the southwest of England and into Wales as well.

“Further south there is unlikely to be any rain because it will fizzle out, but some rain further north.

“The main feature to be aware of through Thursday is actually the risk of thunderstorms in parts of southeastern England and the east of England as well.

“In parts of the west though there will still be some brightness, so once that rain has moved through in the morning Northern Ireland will see a pretty bright day with a little bit of cloud and not much in the way of rainfall once it’s moved through, so the east seeing the majority of any rainfall on Thursday.”

Temperatures on Thursday are likely to hit as high as 25C in London, 21C in Leeds, and the high teen’s in Scotland.

By Friday an area of low pressure will begin to approach from the west, going to the northwest of the UK, bringing some rainfall and increased wind speeds.

In the northwest of the UK, Northern Ireland and western Scotland will witness the most heavy rainfall and strongest winds. 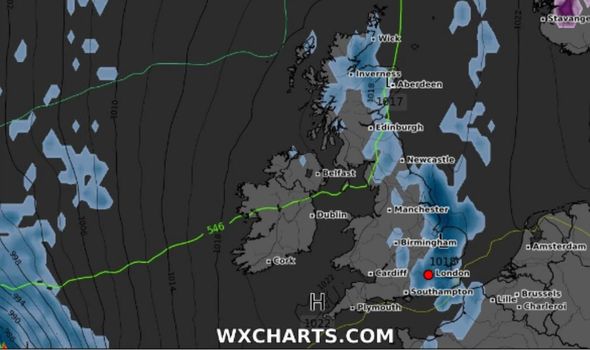 Parts of the Hebrides are forecast to see wind speeds of approximately 58 to 63mph (50 to 55 knots).

The forecast comes as bookmaker Coral slashed the odds to 1/2 (from 4/5) on temperatures reaching 30C in the UK before the week is out.

The firm makes it 6/4 that this month ends as the hottest May on record, June is 2/1 to be the hottest since records began, while it is odds-on at 10/11 for there to be a hosepipe ban this summer.

Coral’s John Hill said: “Temperatures are set to rocket up over the next few days so we have slashed the odds on 30C being recorded in the UK before the week is out.

“Looking further ahead, we could be set for a record-breaking hot June, while we are now odds-on for there being a hosepipe ban this summer,” added Hill.