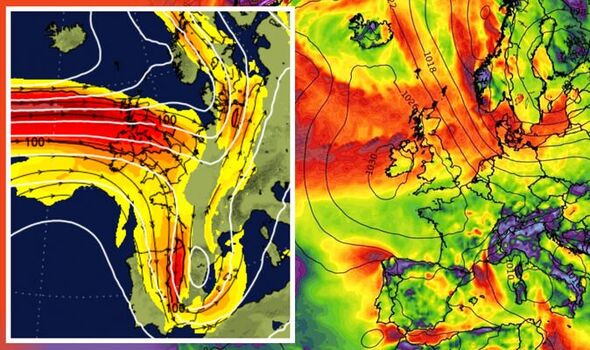 Britain’s weather will take a turn for the worse from today as temperatures in parts nosedive. Scotland and northern Britain are in the firing line for the assault while southern regions will cling on to the warm weather. Jim Dale, meteorologist for British Weather Services, said: “This week is not going to be summer-like.

“The weather is expected to turn unsettled from Monday as the jet stream moves closer to the UK and brings more in the way of low pressure in from the Atlantic.

“There will be a risk of thunder and some wind especially in the north of the country.”

But low-pressure responsible for the onslaught of foul weather will give way at the weekend to another tropical blast.

High pressure will rebuild after mid-week as the sun relights the furnace under the early summer warmth.

Mr Dale added: “High pressure will return around Thursday, and then the weather looks pleasant with temperatures expected to rise again.

“The heat will build largely across southern Britain although there may be the risk of some thundery downpours.

“We could see temperatures reaching around 22C, 23C or 24C by the end of the week.” The stormy interlude is being blamed on the jet stream which after being wedged north of the UK, is about to plunge southwards.

It will open the floodgates to low-pressure systems from the Atlantic to whip up strong winds.

Weather models for mid-week reveal three lows circling the country, two churning the North Atlantic between the UK and Greenland and another to the south.

Weather fronts attached to each will sweep bands of rain across the country through the coming days.

Powerful gusts, particularly across Scotland and northern England, could notch 70kmph or stronger.

A wetter, windier and chillier picture than the past week awaits Britain, according to Netweather’s Terry Scholey.

While much of the country will start warming up ahead of the weekend, eastern regions will keep an easterly chill, he added.

He said: “Much of the coming week is Atlantic driven, making it more unsettled, breezy at times and cooler than of late.

“There will be some rain heavy in places, with stronger winds around mid-week, giving gale-force gusts over exposed parts of North and West.

“Most models suggest a rise in pressure from the South-west on Thursday, settling the weather down.

“It will become warmer again but with a chilly north or north-easterly breeze developing in the East through next weekend.”

Coral bookmakers have slashed the odds to 4-5 on this week bringing May home as the hottest on record.

Spokesman Harry Aitkenhead said: “Temperatures are continuing to rise as we head towards the final week of May, and we now make this month odds on to enter the record books as the warmest fifth month of the year we have ever had.”

But Ladbrokes’ spirits have damped in the soggy forecast with the bookies offering 6/4 on the wettest May on record.

Spokesman Alex Apati said: “It’s looking increasingly likely this rain isn’t going anywhere, and we could be set for a record-breaking wet May as a result.”