Low pressure from the Atlantic is predicted to bring extreme wintry conditions to much of the UK this month. Heavy snow is forecast from Wednesday, January 20, with Inverness and Fort William in Scotland likely to see 12 inches (32cm) settling. Central Scotland is then expected to see a staggering 32 inches (81cm) of snow on Wednesday, January 27, the latest snow depth maps from WXCHARTS show.

Northern parts of England may also be hit with seven inches (18cm) on the same day, including Newcastle and Northumberland.

South-eastern areas could also see at least two inches (7cm) laying by the end of the month.

Temperatures are also forecast to plunge to subzero levels, with lows of -11C in Newcastle on Sunday, January 24, and Scotland seeing a bitterly cold -15C in central parts on January 27.

Gavin Partridge, the owner of GavsWeatherVids, warned of a sustained northerly blast blitzing the UK with bitter wintry conditions on Wednesday, January 20. 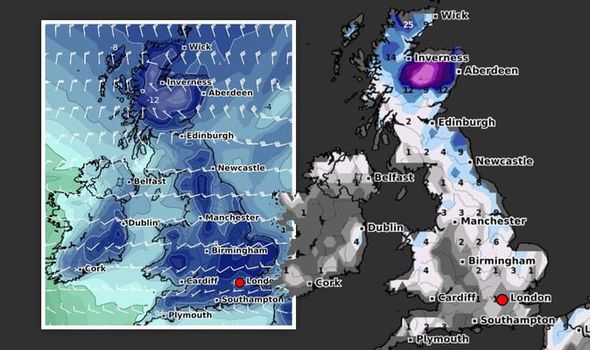 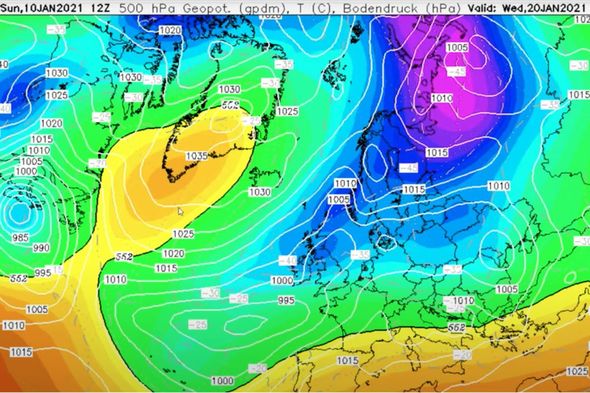 He added rare snow events like this do not happen “all that often”.

Mr Partridge said: “We have cold air established not just over the UK but much of Northern Europe and low pressure coming off the Atlantic, with -10C in Scotland.

“It sets up a very, very cold and snowy path that will bring heavy snow and blizzards to many parts as we go into Thursday, January 21.

“Another low pushes up the south, bringing more heavy snow there on the 22 and a very cold north-easterly wind setting up there as well. 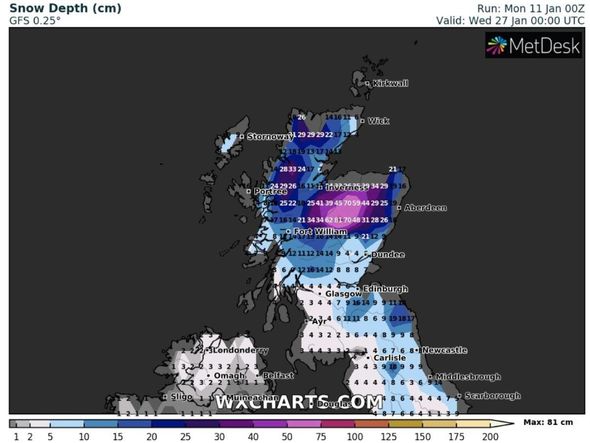 “The heavy snow on January 20 is over Scotland, but then the south will start getting it – so very heavy snow coming into the south, with another big snow event on January 21.

“It just keeps on coming. We don’t see snowy runs like this all that often.”

The BBC’s long range forecast added a cold snap could spark “volatile” low temperatures across the UK later this month and even snow on lower ground.

The forecast between Monday, January 18 and Sunday, January 24 said: “There is still a lot of uncertainty on the westward extent of the cold air, and we could see a few cold blasts mixed in with our overall milder, wetter weather. 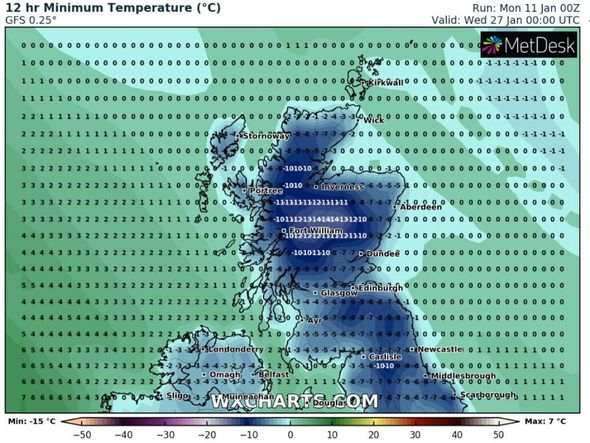 “As a result, this week is likely to continue to see some volatile swings in temperature along with some wet and windy days.

“Fronts moving in over a cold snap will bring a chance of snow, even to low levels, but it is still too far away to pick out the specifics.

“Confidence is medium on the forecast, mainly due to the uncertainty in the temperatures.

“There is risk of more widespread cold, as we have seen in previous years with a displaced polar vortex.” 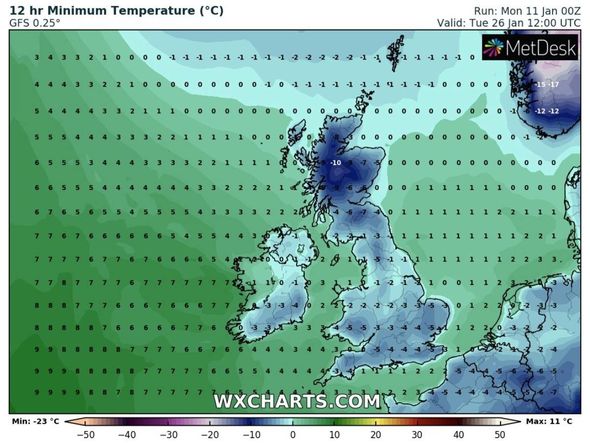 The Met Office also predicted temperature to be “below normal” as more snow is forecast to hit between Friday, January 15 and Sunday, January 24.

The forecast said: “Over the weekend and into the following week rather unsettled conditions will develop across the UK.

“This will bring spells of rain to many areas, these perhaps accompanied by strong winds at times.

“The heaviest and most prolonged periods of rainfall are likely to affect the south and west, with the best of any drier conditions more likely in the north and east. 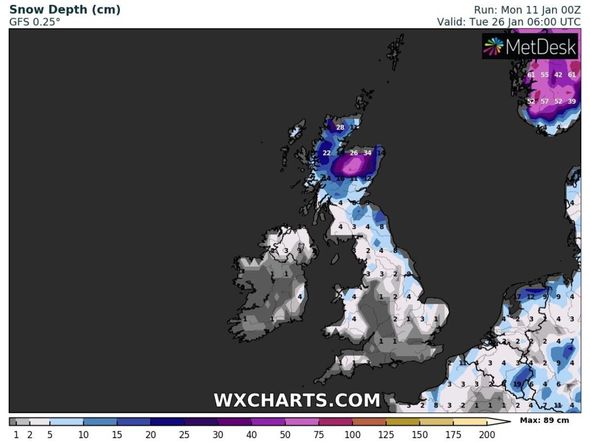 “Some snow is also likely at times in the north, especially over high ground.

“Temperatures are uncertain during this period although current indications are for temperatures to be below normal for the time of year.”

The Met Office added “significant snowfall” could also strike across central and northern areas at the end of January.

The forecast said: “Through this period there is a greater than average chance of cold spells across the UK with the associated risk of wintry hazards.

“There is potential at times for significant snowfall on the boundary between milder and colder air masses, with greatest risk across central and northern areas.”