Ankara accuses Brussels of not living up to promises it made in a 2016 deal that almost halted refugee flow to EU. 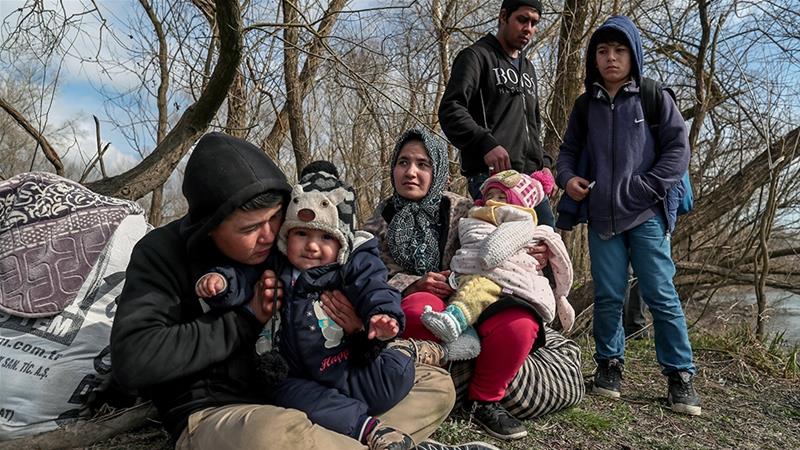 Turkey announced last week it would not block the passage of refugees wishing to head to Europe amid escalating violence in northwestern Syria and the risk of a fresh influx of hundreds of thousands of people from the war-torn country through its southern frontier.

The move on Thursday threatens to unravel a deal Turkey signed with the European Union in 2016 to stop arrivals in the bloc in exchange for funds allocated to the handling of the millions of the refugees it hosts, among other benefits.

Following the opening of the Turkish side of the border, which came hours after the killing of dozens of Turkish soldiers in Syrian government air raids, dramatic footage showing refugees trying to cross over sea and land into neighbouring Greece – an EU member – have been widely shared.

Turkey had threatened many times in the past to go ahead with such a move, accusing the EU of not fulfilling its promises.

“We have been calling for a more equitable burden and responsibility-sharing for a long time,” Hami Aksoy, the Turkish foreign ministry spokesman, told Al Jazeera.

“All our efforts contributed significantly to the security of Europe. However, our calls were ignored by the EU and member states.”

According to the United Nations refugee agency, Turkey hosts the largest number of refugees worldwide: close to 4.1 million, including 3.7 million Syrians and nearly 400,000 asylum seekers and refugees of other nationalities.

Turkey also controls swaths of land in northern and northwestern Syria following the three operations it carried out in recent years targeting fighters it considers “terrorists”. Ankara has invested in schemes to redevelop these areas to facilitate “voluntary returns” for the refugees it hosts.

“We are the largest refugee-hosting country in the world since 2014,” Aksoy said. “If we take into account of Syrians in northern Syria, we practically assume the burden of more than nine million Syrians.” 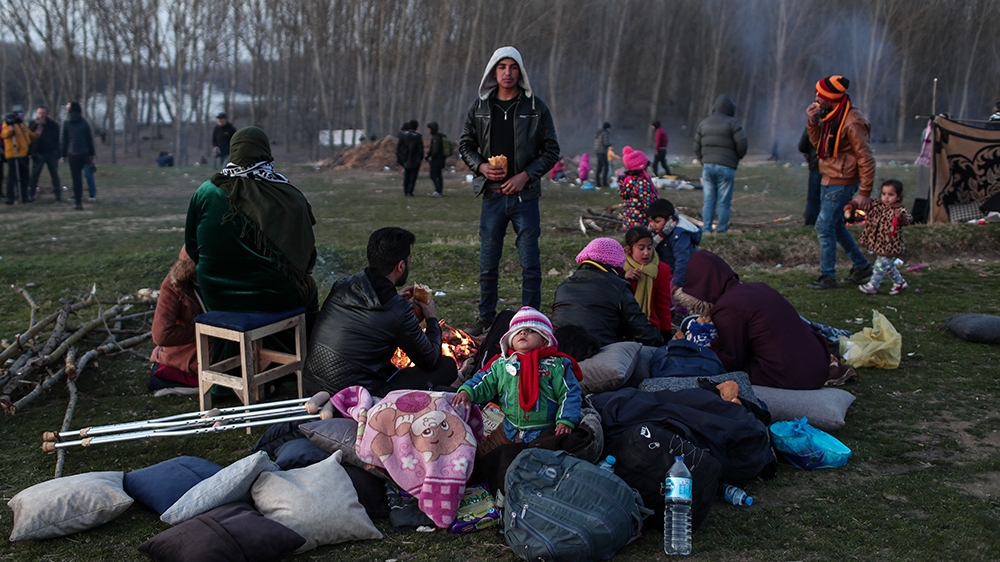 The EU-Turkey refugee deal, which was criticised by rights groups, came after a massive influx of refugees into the EU in 2015 and early 2016, when more than one million people arrived in the bloc by foot or boat.

In 2019, that number stood at 123,663, including sea arrivals to Italy, Cyprus and Malta, and both sea and land arrivals to Greece and Spain.

The European Commission said last year the number of irregular arrivals of refugees entering Greece had reduced by 97 percent since the implementation of the 2016 deal.

At the heart of the 2016 agreement was the so-called “one-for-one” scheme, whereby Turkey would send a Syrian refugee into the bloc the for each one it accepted back from the Greek islands.

The deal also included promises for loosening visa restrictions for Turkish citizens, the re-energising of Ankara’s EU accession talks and upgrading of the customs union between the two sides. The Turkish government has argued that Brussels has not held its side of the agreement over these issues, even though it has fully complied itself.

The EU also promised to grant six billion euros in two equal tranches to refugee-related projects in Turkey. In a statement to Al Jazeera on Monday, the Turkish foreign ministry said, of the first three billion euro instalment, a total of 2.47 billion euros had been released, with 2.15 billion euros used by organisations tasked with implementing the projects.

Ankara, however, says the EU has been slow in releasing the second part of the aid, noting that only 754 million euros have been released and 77.4 million euros used so far.

The EU said that 2.4 billion euros of the total aid had been disbursed as of November 2019.

On Sunday, as heavy fighting between Turkish and Syrian forces continued in Syria’s Idlib province, where a government offensive has pushed nearly one million people towards the shut Turkish border, Turkish President Recep Tayyip Erdogan pledged to keep his country’s EU borders open.

“We will not close those doors … Why? Because the European Union should keep its promises,” Erdogan said.

“Still, for me it’s unacceptable that he – President Erdogan and his government – are not expressing this dissatisfaction in a dialogue with us as the European Union, but rather on the back of the refugees,” she told reporters. “For me, that’s not the way to go forward.” 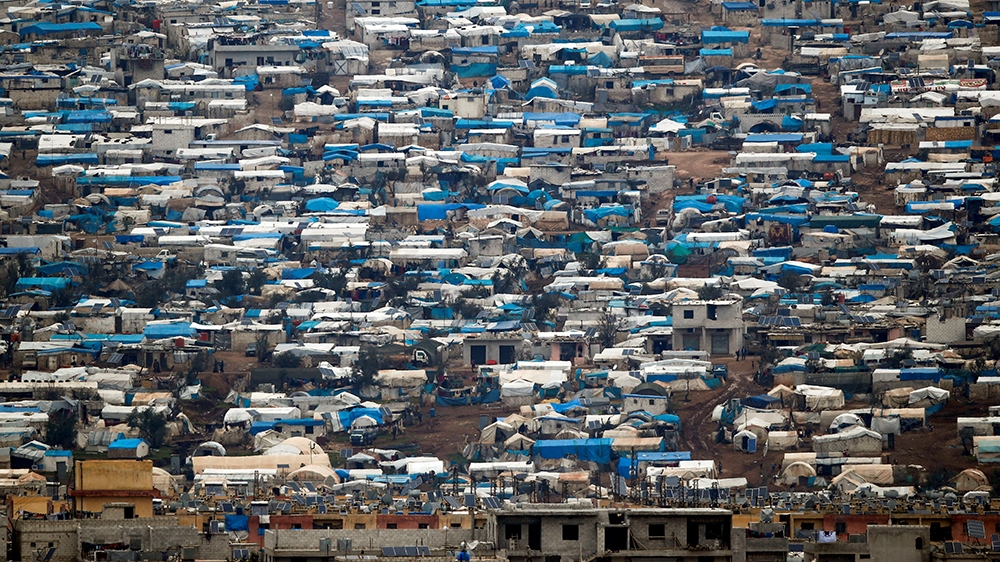 Turkey, the UN and aid groups have warned of an unprecedented humanitarian crisis if the Russia-backed Syrian government offensive on Idlib, the country’s last rebel stronghold, does not stop.

Damascus and Moscow say the military operation is aimed at removing “terrorists” from the region, in line with a 2018 de-escalation agreement reached between Russia, Iran and Turkey.

The Hay’et Tahrir al-Sham armed group, a former al-Qaeda affiliate that is considered by Russia and Turkey a “terrorist” organisation, controls a large portion of Idlib.

Aksoy said that if the situation deteriorates in northwestern Syria, the risk of a massive refugee inflow on Turkey’s border will further increase.

“Latest developments in Idlib resulted in the displacement of hundreds of thousands of people to our border,” Aksoy said.

“It has further increased the migration pressure on Turkey.

“In this respect, it is obvious that every country should respect their international obligations, should receive international protection applications of those arriving at their external borders and ensure their access to legal assistance and representation,” he said, in an obvious reference to Greece.

Following Turkey’s EU border move, the Greek government announced it was freezing asylum applications as part of a series of measures aimed to increase deterrence at its eastern frontiers. 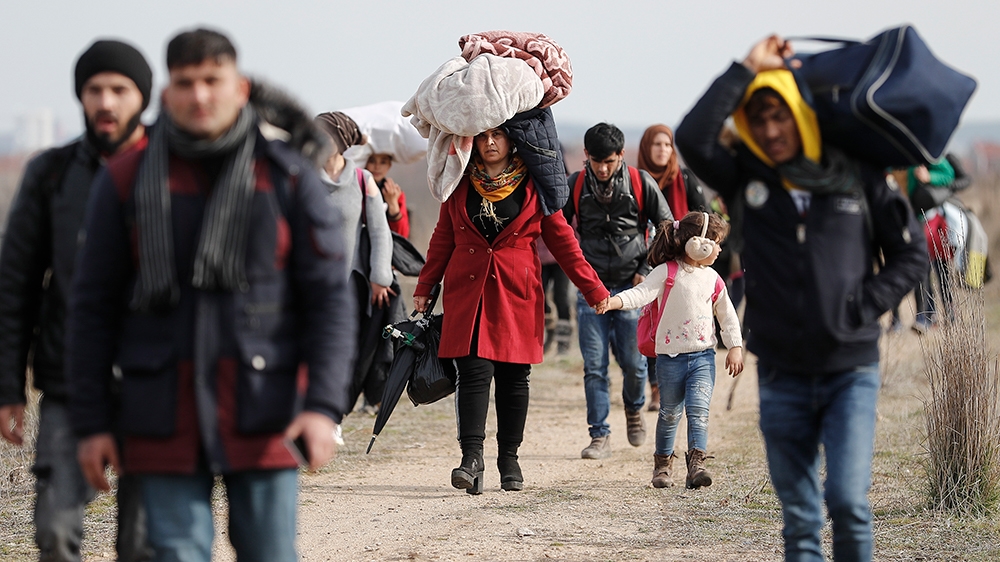 On Tuesday, Turkish Interior Minister Suleyman Soylu said on Twitter that more than 130,000 refugees had left Turkey for Greece.

In contrast, Greek authorities argue that 139 people who entered Greece without documents have been arrested since Friday, adding that they stopped thousands of others before entry.

“No one can cross the Greek borders. All those attempting illegal entry, are effectively prevented from entering. Numbers cited by Turkish authorities are entirely false and misleading,” the Greek foreign ministry said in a recent tweet.

“The present situation is an active, serious, severe and asymmetrical threat to the national security of the country. These … people are being used by Turkey as pawns to exert diplomatic pressure,” Greek government spokesman Stelios Petsas said on the issue.

Meanwhile, a senior Turkish official on Monday shared footage and photos purportedly showing hundreds of refugees passing or attempting to cross the border into Greece.

“[The] images and video footage … cast serious doubt about the data available to the Greek foreign ministry,” the official, speaking on the condition of anonymity, said.

Meanwhile, EU High Representative Josep Borrell and Commissioner Janez Lenarcic were due in Turkey for a two-day visit.