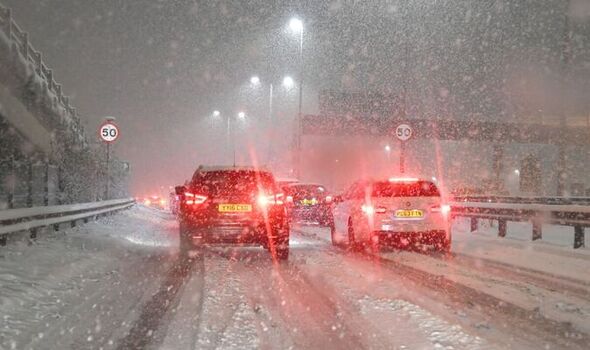 The lowest temperature was registered at a teeth-chattering -15.6C in Braemar, Scotland, which made it the coldest night of the year and the coldest since February 2021. But with weather forecasters warning that the Arctic blast will last all week, commuters faced treacherous conditions as they battled to get to and from work.

Hundreds of schools closed for the day as plummeting temperatures overnight meant road users woke to thick ice coating much of the nation’s major routes.

This followed heavy snowfall across much of the country on Sunday, leaving roads like ice rinks.

Many of the more minor routes were deemed impassable, particularly in parts of the south east.

As councils up and down the UK sent out an army of gritters, motoring organisations described some of the most hazardous conditions they have seen in years.

Those hoping to use the trains fared little better with ice, snow and freezing fog causing widespread cancellations and delays.

Air travel was also hit by reduced services, with more than 100 cancellations after both Gatwick and Stansted airports had closed runways on Sunday to clear snow.

But with the Arctic air firmly stuck over the entire country, motorists faced risky journeys.

As the Met Office issued several yellow severe weather alerts, roads in eastern and south-east England were among the worst hit.

Drivers on the M25 in Herts were stranded for several hours due to the UK’s busiest motorway being closed in both directions between Junction 23 for South Mimms and Junction 25 for Waltham Cross.

National Highways said the carriageway would be “cleared and treated as soon as possible”.

But there were delays of up to 90 minutes on neighbouring stretches of the motorway.

In the south, Sussex Police issued a warning for “treacherous” roads as thick ice coated the county’s network, including the M23. Motorists stuck on the A406 North Circular Road in London bided their time by building a snowman in the middle of the carriageway.

But both the AA and the RAC warned drivers to adjust their driving to the freezing conditions.

RAC Breakdown’s Rod Dennis said: “Our teams are incredibly busy today – over 4,000 drivers have already broken down and called us for help. We’re doing everything we can to get to people. By the end of the day we expect to have handled in the region of eight breakdowns every minute, 40 per cent more than we would expect on a typical Monday in December.

“With some parts of the country blanketed by snow and the rest of the country enduring sub-zero temperatures, drivers should only drive if conditions allow and they feel confident enough to do so.”

On the railways, many lines were shut, with Southeastern issuing a “do not travel” alert to passengers.

There were major disruptions to services run by Greater Anglia, South Western Railway and Southern as thick ice caused havoc.

There was also severe disruption to London Underground. And delays persisted at airports, with Gatwick warning passengers to check with airlines before leaving.

It meant some had to bed down for the night at their terminals.

A spokesman said: “Snow and freezing weather may cause disruption. Passengers are advised to check flight status with their airline – and also local travel conditions – before departing for the airport.”

But some Brits who faced delays returning from destinations including Cyprus, Morocco and Spain were less than impressed. One tweeted: “Snow has brought country to a standstill even though it was forecast a week ago.”

In total, there were more than 300 flight cancellations. This included more than 50 flights with EasyJet. Luton Airport also saw around two dozen cancellations. At Heathrow, British Airways axed more than 70 flights to and from the airport, mostly on European and domestic routes.

At Stansted, there were around a dozen or so cancellations, while there was also disruption at London’s City airport.

The weather also stretched the NHS. In Wales, demand on the ambulance service “exceeded its capacity to respond” to calls, with some people being asked to make their own way to hospital.

But the big freeze also led to renewed calls to the public to check on the elderly. Pensioners were urged to make sure their heating was on – despite concerns over energy bills.

Dr Agostinho Sousa, consultant in public health medicine at the UK Health and Safety Agency (UKHSA), said: “Cold weather can have serious consequences for health. Older people and those with heart or lung conditions can be particularly at risk.”

People with pre-existing medical conditions should make sure their homes are heated to a comfortable temperature, he added.

The UKHSA also advised wearing several layers of thinner clothing rather than one thicker layer and to have hot food and drinks.

Last night, the Met Office warned the icy conditions are likely to last at least until the weekend.

“Ice and further snowfall is likely in parts each day this week with overnight temperatures well below freezing.

“It’s still a way off, but the current thinking is that it’ll be Sunday when we start to get some milder air moving in.”