The Secret to Thanksgiving Turkey 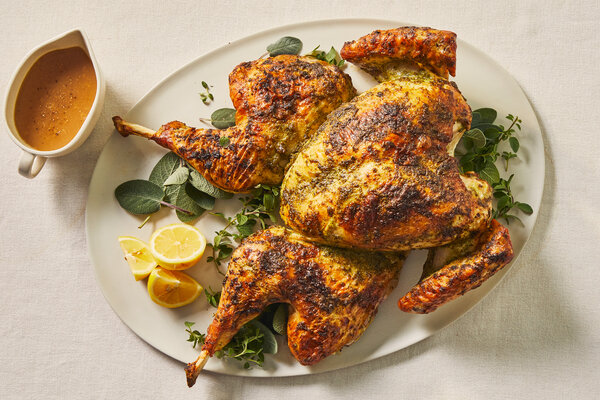 Here at New York Times Cooking we start brainstorming turkeys in July. It’s our job to come up with thrilling new recipes for your Thanksgiving table, and it can take months of testing and tweaking to create something at least as tasty and reliable as the many, many, many turkey recipes that have come before.

This year’s bird (above), by J. Kenji López-Alt, may be one of our best yet. Kenji, who brings his methodical, scientific approach to cooking to The Times, took a recipe he’d already perfected (a dry-brined, spatchcocked bird), then made it even better.

The secret ingredient? Mayonnaise! (To the mayo-averse, hear me out.) Easy to get and a cinch to use, the oil-based emulsion helps spread fat-soluble ingredients like garlic, sage, parsley and lemon all over the bird, and then keeps them clinging to the meat instead of melting into the bottom of the pan, as a compound butter would. The egg in the mayonnaise also aids in browning, turning the turkey skin a deep, glowing mahogany. It’s a mad-scientist-level innovation that you can personalize, seasoning your mayo with your signature blend of herbs, spices and aromatics.

Not feeling avant-garde? We have oodles of other turkey recipes, including some sensational five-star approaches, like Samin Nostrat’s buttermilk-brined turkey, my simple, dry-brined roast bird and Sam Sifton’s roast turkey with orange and sage.

Or, for a smaller dinner, you could consider going with turkey parts. Eric Kim has a fantastic recipe for a lemony salt-and-pepper roast turkey breast that serves six, with leftovers. And there’s my roast turkey thighs with cranberries and onions, perfect for a couple of dark meat lovers.

Let’s get some side dishes in the mix. Christina Morales recently wrote about a tradition among Brazilian immigrants in the United States who serve purê de mandioca (creamy yuca purée), a beloved staple of their cuisine, instead of potatoes at their Thanksgiving dinners. Mixed with whole milk and butter, it’s got the comforting starchiness of mashed potatoes, but with a distinct, mild, nutty flavor.

Other possibilities for your starchy side slots: Sohla El-Waylly’s roasted and smothered squash with fragrant spiced onions, or Millie Peartree’s take on a marshmallow-dotted sweet potato casserole, made crunchy with cornflakes.

Krysten Chambrot, a senior editor at New York Times Cooking, did us a great service by putting together a list of some of our best side dishes, including Julia Moskin’s snappy, tangy green beans with ginger and garlic to liven up all those beiges and browns on the table. And there’s Yewande Komolafe’s crunchy, peanut-topped roasted carrots spiked with yaji, a heady Northern Nigerian and West African spice mix guaranteed to wake everyone from their carbohydrate and tryptophan-induced food comas.

You will need a subscription to get these and the scores of other Thanksgiving recipes available at New York Times Cooking. (Reminder: For a limited time, you’ll get 50 percent off your first year.) You can also find us on TikTok, Instagram and YouTube, where Genevieve Ko demonstrated her beautiful new recipe for spiced pumpkin cheesecake with a vibrant turmeric-ginger topping.

Now, it wouldn’t feel like Thanksgiving without the Macy’s Thanksgiving Day Parade. Although I grew up in New York, I’ve never gone; I’m always too busy cooking. But I do get the parade secondhand through the news, like that time the confetti turned out to be minimally shredded police records, or the myriad balloon mishaps.

Fun fact: It didn’t start out as a Thanksgiving parade at all, but as a stunt to jump start the 1924 Christmas shopping season (and to edge out the rowdy Ragamuffin Day parade). That year, the floats were accompanied by store employees and animals borrowed from the Central Park Zoo. The organizers quickly realized that marching tired elephants and tigers through Midtown just wouldn’t fly, but big balloons might. And for a dozen parades or so the balloons were released into the air over Manhattan, with a return address label that promised a $100 bounty for their return.

Mayhem ensued, so that got nixed, too. Santa is the parade’s most-hyped personality, but for my money the great Betty White was its brightest star.

Sam’s back on Friday, and I’ll see you on Monday.