The hellish fight to keep children alive in a Yemeni hospital

If there is a hell, it could well be in a small hospital in north Yemen. There is misery and desperation in every corner you look.

They thought in Yemen, it couldn’t get any worse after six years of civil war. They were wrong. A collision of factors has created what charity workers are calling the ‘perfect storm’.

War, malnutrition and now a global deadly pandemic have created a torment from which many Yemenis simply will not recover.

Even the tough medics of the Abs Children’s Hospital struggle to maintain their composure in the avalanche of unrelenting wretchedness here.

We watch as the teams work on baby after baby. The other mothers crowd round as word got out about the struggle to save a tiny little new born, little more than a month old. 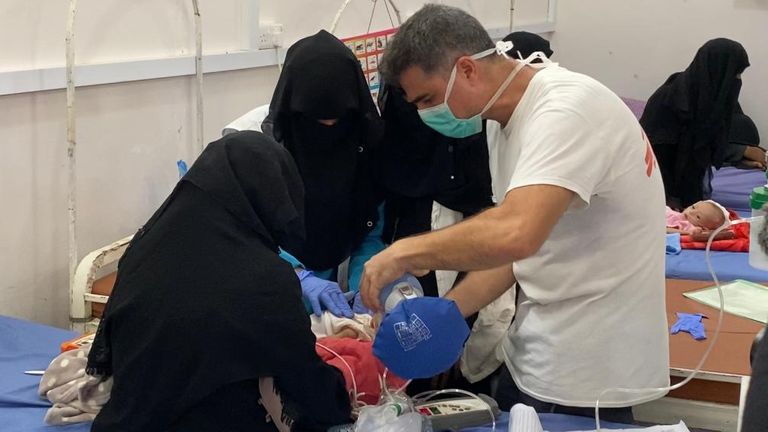 One doctor whose name I only know as Javier, cradles the baby’s head in one hand.

The mask he is using to try to pump oxygen into little Taif’s small lungs almost covers her entire face. He holds the baby’s right hand, her fingers curled around his whilst he uses two digits from his other hand to push gently on her heart to keep it beating.

“It’s a very low heartbeat,” he tells us. We could see the heart monitor flickering between numbers, signalling life – death – life again – death.

Javier’s constant pushing keeps nudging Taif into this world, this world where her four siblings go to sleep hungry every night and where her mother Randah struggles to produce enough breast milk to feed her little one because she’s so undernourished.

The doctors keep working on her, determined not to give up. Nurses flutter round with injections of stimulants and fresh machines to suck mucus out of her lungs.

But everyone present knows it is a hopeless battle. They shine the light from a mobile phone across her eyes. There’s no response. There’s no heartbeat either.

They knew this before they even checked but seem reluctant to accept what seems obvious to everyone witnessing this titanic struggle to save this minuscule human.

Javier silently packs up his stethoscope and heart cables. “She’s passed away,” he says matter-of-factly but his eyes betray much more turmoil than is immediately apparent.

Dr Izzedine Mohammed is struggling to hold back his emotions. “I have to deal with this every day…this is my life…every day. And this is what is disturbing us the most…because it’s a preventable death. It’s not an inevitable death…it’s something we can prevent by only giving food.”

The rest of the hospital quietly disperses. The mothers return to their own babies, struggling against the odds to survive here. Everyone of them must be thinking that could be their baby next.

Hunger is ravaging the country like never before. It should shame the world community that in the year 2020, babies and toddlers are dying from starvation here.

Take a moment to process that. There are children with so little food that they’re susceptible to every single infection or disease going. Children with so little nutrition, that from the moment they’re born, they’re struggling to survive a mountain of disadvantages including what many believe is an entirely preventable conflict.

Children in Yemen are so weak from hunger, a bout of diarrhoea will kill them within days. And these same children are so fragile they stand little chance in the midst of a global pandemic which is wiping out richer, stronger, much more privileged human beings around the planet.

Everywhere we look we see tiny, skeletal bodies laying on every bed in the main children’s hospital in Abs, in Hajjah Governorate. And there’s not a bed that doesn’t contain a tragic tale. 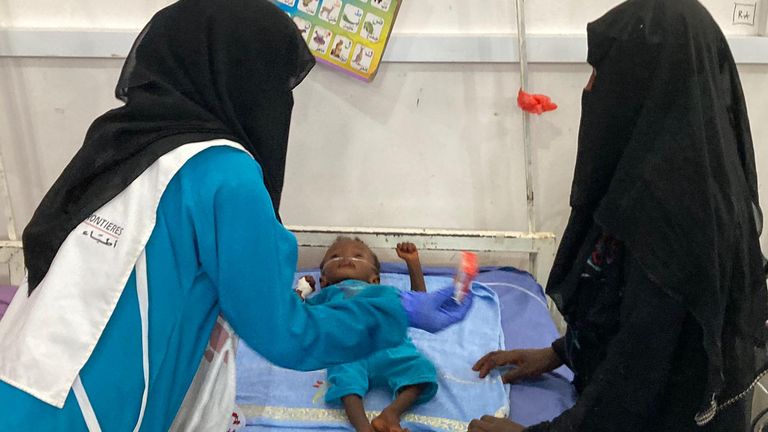 They are scraps of humanity, wriggling in pain. Most are too weak to even cry. Those who do yelp or cry out in agony are the healthier ones.

Yet make no mistake, no-one but no-one is healthy in here. There are even some children hanging from hammocks underneath the beds.

The medics from Medecins Sans Frontieres buzz around, moving briskly from bed to bed and critical case to critical case.

These are dedicated people, the guardian angels of this area, desperately trying their best to save lives in the most horrendous of circumstances and fighting a tide of despair every hour and every day.

Many of the people they are caring for have moved several times to escape the fighting. Nearly all the country is dependent on aid.

The United Nations believes 80 per cent of the country needs help just to make it through the day. Whole families, whole communities, whole villages have moved several times – exchanging one set of desperate circumstances and abject poverty for another.

“This is malnutrition (which has caused this),” Dr Ali Mohammed, the hospital supervisor tells us, his voice filled with frustration whilst pointing to a small boy with a wizened, scrunched up body which makes him look so much older than his two years.

Zaid Mohammed was born with cerebral palsy to his young, twenty-something year-old mother (many Yemenis just don’t know their exact age) whilst they were living in a rough makeshift camp filled with hundreds of displaced people from their village. 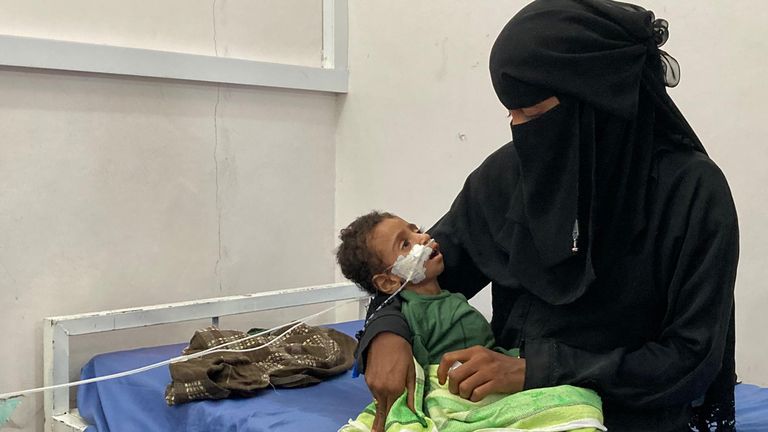 His father, Mohammed Ali took three days to build the mud and straw room that the family normally sleeps in. The simple structure is held together by discarded bits of plastic. The family have to queue up outside a charity water tank where they, like everyone else in this camp, have water rationed to three cartons per family.

Zaid has spent most of his 24 months in and out of hospital but his condition is the worst it’s ever been, brought on by malnutrition which has led to infections and weakened his already feeble body.

His mother, Zahra, is beside herself. She looks exhausted. Her eyes are red. “I haven’t slept for two years,” she says, “And until now we haven’t had any help – no bread or tents from anyone. Our life is very difficult.”

Zaid’s father is sleeping outside on the hospital pavement until his son can leave hospital. They are still optimistic he will leave hospital but nothing is certain. Each child is hovering between life and death. Survival – or not – can turn in an instant.

The little boy’s every breath looks painful as flies gather at his mouth. His body has been craving food for so long without getting enough, it is finally rejecting it. “He can’t keep anything down,” his exasperated mother tells us. Sustenance is administered via a nose drip. 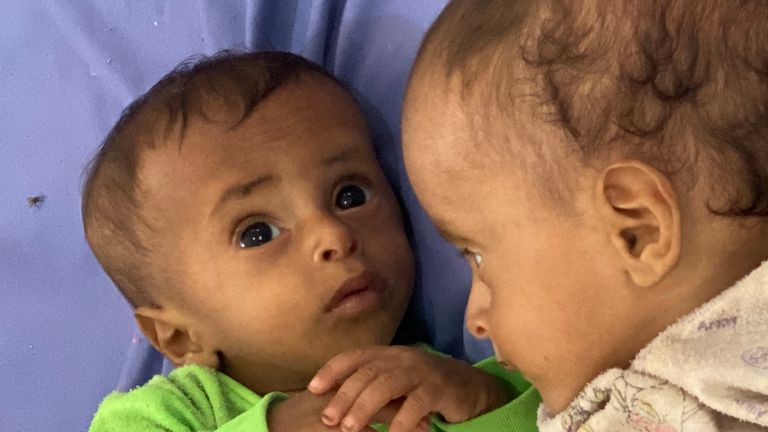 Yemen, now one of the world’s poorest countries, is strategically important, sitting on the Bab al-Mandeb strait which links the Red Sea with the Gulf of Aden and through which much of the world’s oil supplies pass.

But it’s been devastated by a protracted war which has its roots in the Arab Spring uprising which saw the toppling of the country’s long-time authoritarian leader Ali Abdullah Saleh.

Yemen’s most recent history is as bloody and brutal as it is complex. In brief, the Arab Spring rebellion saw Saleh forced to hand over power to his deputy Abdrabbuh Mansour Hadi whose Government continues to be internationally-recognised and is supported by a coalition of powerful countries headed by Saudi Arabia and backed by Britain, America and the United Arab Emirates. But from the onset, President Hadi struggled to contain a range of problems including al Qaeda and ISIS attacks, widespread poverty and corruption.

These weaknesses were exploited by the rebel Zaidi-Shia Houthi movement which took control of swathes of the north including the capital Sana’a, setting up its own rival authority, multiple checkpoints and quickly winning military and logistical support from Iran.

Despite the Saudi-led coalition establishing air dominance and delivering a blistering number of attacks over the past five years killing thousands of civilians killed and mounting a siege of the north restricting aid to the territory, neither side has secured victory.

Both sides are accused of war crimes and crimes against humanity with the Houthis regularly accused of recruiting and coercing children into the conflict, laying landmines in civilian areas and carrying out indiscriminate shelling of civilians and residential areas.

Yemen was already broken but the coronavirus pandemic has only added further misery and seen international donations plummet amid the global economic uncertainty.

The tighter restrictions on vital food imports has led to high increases in prices and further exacerbated the severe hunger suffered by millions of families.

Little baby Taif is now one of Yemen’s many dead. Her family joins the thousands grieving for lost loved ones. And there will be many who believe her death – and so many others – is only because of political inaction.