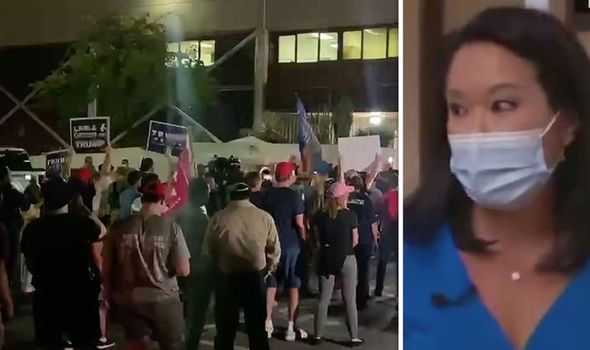 Social media and CCN footage showed Trump supporters swarming the Maricopa County Elections Department building in Phoenix, Arizona. A flock of the supporters were branding Trump 2020 flags and chanting “let us in” while crucial ballots were being counted. As more supporters turned up to protest the ballot counting, they began chanting “count those votes” and “you are fake news”. In response, Maricopa County Sheriff’s deputies have prepared ready in tactical gear inside the centre to potentially disperse the protesters should demonstrations get out of hand.

CNN’S Kyung Lah was live at the Maricopa centre as the protesters appeared, and mentioned how as Arizona is an open carry state some of them were armed.

She added, referring to the ballot counters in the building: “I mean these people parked in that parking lot, how are they going to get out once they finish the count?

“Because we are expecting a count in about 20 minutes.”

CNN also reported that due to the protesters, the ballot counting would be finishing earlier and the centre would be closing.