So Ancient, Yet So New: Gorgeous Red Wines From Greece

It may seem paradoxical to think of Greece as an emerging wine producer, considering the ancient lineage of its grape vines and wine production.

But in the global marketplace of fine wines, that’s exactly how Greece should be seen.

It is not a question of how long a country or region has maintained a culture of winemaking, but how recently its bottles have begun to appear in far-flung parts of the planet.

By that standard, it’s only in the last 20 years or so that the rest of the world has gotten an opportunity to learn firsthand about the beauty of wines from Greece, or, for that matter, about other ancient winemaking cultures, like in the Caucasus and, indeed, lesser-known parts of France, Italy, Spain and Portugal.

With Greece, and especially in the case of its red wines, 20 years may be an exaggeration. Finding Greek reds in New York even 15 years ago would have required a trip to Astoria, Queens, a Greek enclave where wine shops would cater as best they could to the tastes of their local clientele and recent immigrants.

Often, that meant the sort of simple taverna wines that had long dominated wine production in Greece. These wines had only fairly recently found their way into individual bottles, rather than the traditional demijohns in which they had long been sold locally. A few more ambitious bottles might gather dust on the shelves for years until some curious soul popped a cork, only to find a sad, oaky, oxidized wine.

So much has changed, and so quickly. This February, shopping online at a handful of Manhattan wine shops, I was able to find 12 gorgeous Greek reds without leaving my desk (though believe me, I’d give anything these days for an in-person shopping experience).

“The quest for quality rarely goes hand in hand with the quest for survival,” Konstantinos Lazarakis noted in his authoritative book “The Wines of Greece” (Infinite Ideas, 2018).

In other words, over the last third of the 20th century, Greece had to develop a prosperous enough economy to support both a wine industry focused on quality and consumers willing to pay for those wines. This was accomplished and continues, despite the financial crisis of the last decade that so desperately afflicted Greece.

If anything, Mr. Lazarakis asserted, the financial crisis helped propel Greek wine producers to try to sell their wines internationally, as the financial meltdown shrank what had been a thriving domestic market.

In a sense, Greece finds itself in a similar situation with what occurred in Italy and Spain, though trailing by a number of years. In those countries, lesser-known regions had to develop confidence in their indigenous grapes and traditions, as well as an infrastructure that would permit them to send the best examples of these bottles to faraway places.

The process is not quick, and can be slowed even more by producers who try to emulate styles that seem successful in international markets. We’ve seen that in Greece, with plantings of popular red varieties like cabernet sauvignon, merlot and syrah, used to make powerful, oaky wines. We saw the same in Italy and Spain.

Just as those countries gained confidence in their own traditional varieties, so has Greece. Each of the 12 wines I’ve selected is made from Greek grapes like xinomavro and agiorgitiko, which the rest of the world has gotten to know, and a few like mavrodaphne, mandilaria, limniona and vlahiko, which global consumers may get to know in the coming years.

Greece even has a nascent natural wine culture, motivated as much by resurrecting traditional practices as by working with fewer chemicals in the vineyard and less intervention in the cellar.

Those bottles, identified by questing importers like Eklektikon and DNS Wines, among others, are some of the most interesting. But like most natural wines, they are made in small quantities and so many be difficult to find.

My 12 selections are far from the only Greek reds worth seeking out. Different regions of the United States and other parts of the world will have other bottles available. If you can’t find these wines, you can consult a previous article on Greek reds. Or, if you prefer whites, the selection from Greece is excellent and more widely distributed.

If you can’t find any bottles, remember that this is the early stages for Greek reds. I’m certain the selection of good, distinctive Greek wines will only grow.

Here are the 12 bottles that spoke to me, in order from low price to high. 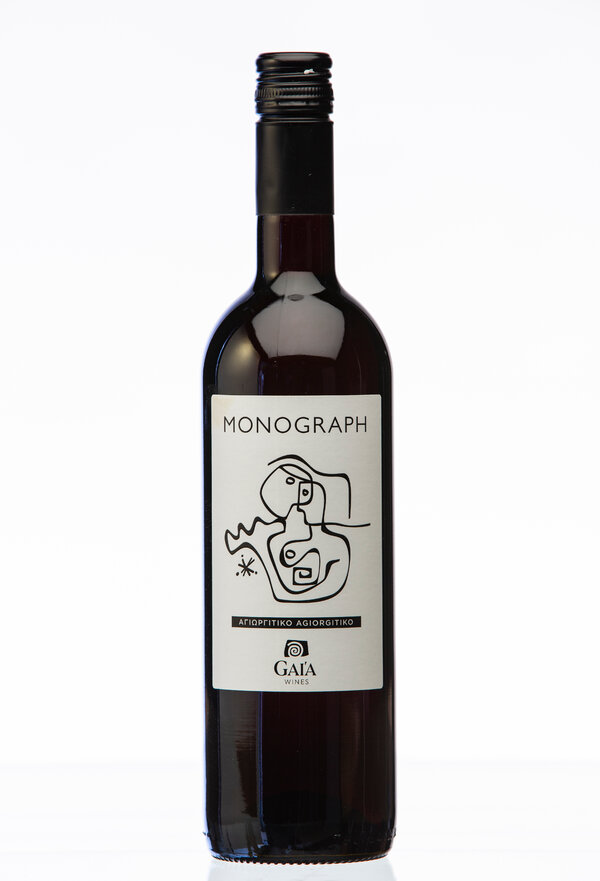 This juicy, inexpensive, casual wine is a great introduction to the world of Greek reds from Gaia, one of Greece’s leading producers. Gaia has two wineries, one on Santorini, which makes excellent whites, and one in Nemea in the Peloponnese, which focuses on reds and retsina. This bottle is made entirely out of the agiorgitiko grape, one of the most common varieties in Greece. It’s straightforward and goes down easily. (Winebow/Craft & Estate, New York)

Mandilaria is one of the principal indigenous grapes of Crete, where Giannis Stilianou farms outside of the city of Iraklion. The grape is known to produce wines that are deeply colored and fiercely tannic, yet this wine is ruby-colored and not at all chewy or astringent. What gives? It’s macerated on the skins for just one day, almost like a rosé, before it’s fermented. Mr. Stilianou works naturally, so nothing is added to this wine beyond a tiny amount of sulfur dioxide. The result is an unmediated honest expression, lightly fruity, earthy and delicious. (Eklektikon, Wilmington, Del.)

Ioannina is in the northwest of Greece, in the Epirus region, west of Thessaly and abutting Albania. Glinavos, which made its first wines in 1960, was one of the first smaller wine producers in this region, which had been dominated by cooperatives. This wine is made of two local grapes, vlahiko and a smaller amount of bekari. It’s fresh, spicy and juicy, beautifully balanced, with plenty of peppery fruit flavors. (DNS Wines/T. Elenteny, New York)

Siatista is in a mountainous region in western Macedonia, where the Diamantis family have long grown grapes. They farm xinomavro and moschomavro, a lesser known red grape that was often used for making sweet wines. This one, however, is bone dry, lively and delicious; with juicy, well-focused aromas and flavors of flowers, red fruits and herbs. (DNS Wines/T. Elenteny)

This wine, from the Patra area in the Peloponnese, is made of the mavrodaphni grape, which has long been associated with sweet, fortified wines. But this bottle is bone dry, light and fruity, almost like a pinot noir. Because it is dry, though, the name of the grape is not permitted on the label. Panagiotis Dimitropoulos, the proprietor of Sant’Or, farms biodynamically and without irrigation. In the cellar, he works naturally, adding very little sulfur dioxide in the wines. (Eklektikon)

This wine has been a favorite of mine for at least five years, and it illustrates the sometimes tenuous situation of indigenous grapes all over the world as they can easily be squeezed out by better-known varieties, particularly when the aim is to sell internationally. Christos Zafeirakis, the proprietor, almost single-handedly resurrected limniona by planting it in the Tyrnavos area in Thessaly in 2000. Others have joined him, and it’s easy to see why. In Mr. Zafeirakis’s hands, limniona makes a spicy, juicy, agile, fine wine, with floral, herbal and spice flavors. In his book “The Wines of Greece,” Mr. Lazarakis likens limniona to mencía, the leading red grape in Ribeira Sacra, and Bierzo in northwest Spain. That’s a pretty good call. (DNS Wines/T. Elenteny)

Kontozisis is an organic grower in Karditsa, in the southern part of the Thessaly region. Sun Red is a straightforward dry red made of equal parts xinomavaro and limniona. It’s an auspicious blend, with the graceful, elegant limniona combining well with the more tannic, powerful xinomavro. This wine is rich, earthy and deeply flavored, with a pleasing grippiness that will go well with steak and other grilled meats. (Eklektikon)

This exceptional xinomavro comes from Kir-Yianni, one of Greece’s leading estates, situated in the Naoussa region of Macedonia. It’s well balanced with deep dark fruit, licorice and herbal flavors, an accent of oak and fine tannins. It’s polished and modern, but not in the sense that its Greek identity is blurred. (Diamond Wine Importers, Chicago)

This is a fascinating wine from the Slopes of Aenos, on the island of Cephalonia in the Ionian Sea, where the Sclavos family has been farming biodynamically since the 1980s. Like the Sant’Or, it is made of the mavrodaphne grape, which is traditionally used to make sweet red wines. This is a dry red, and so is not permitted to use the name of the grape on the label, hence the proprietary name Orgion. It could not be more different from the Sant’Or, tobacco-scented, intensely herbal and reminiscent of a Médoc. Delicious! Try it with lamb chops. (DNS Wines/T. Elenteny)

Sigalas may be better known for its white wines than its reds. But it has been one of Greece’s leading advocates for the mavrotragano grape, a red grape indigenous to Santorini, which had been slowly disappearing. If it is now beginning to receive some attention, it’s because of wines like this one. In this bottle, mavrotragano makes up 60 percent of a blend with mandilaria. Together, they produce a fresh, lively red fragrant with wild berries, citrus and herbs. (Diamond Wine Importers)

Vasilis Vaimakis buys grapes in Macedonia from only organically farmed vineyards, and this wine, with no added sulfites, certainly qualifies as a natural wine. The wines in his Mater Natura series follow a quirky numbering system in which the 2010 xinomavro was released before this 2009. I’m not sure what the logic is, but this wine, the current vintage at 11 years old, is gorgeous — rich, deep and dry, with aromas of plums and licorice and fine tannins that can barely be felt. It’s made in small quantities, so it will be difficult to find. But a wine like this demonstrates the aging potential of this excellent grape. (Eklektikon)

This is another superb xinomavro, made from old-vine grapes farmed biodynamically. It’s complex and bright, with a deep licorice flavor accented by citrus and herb flavors that seem to skyrocket in all directions. It’s a wine worth thinking about, one that can be enjoyed now or aged to see where else it will go. (DNS Wines/T. Elenteny)