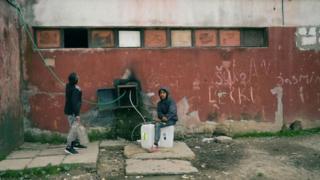 Slovakia is to begin testing members of the Roma community for coronavirus on Friday.

The government announced the measures on Monday, saying that around 1,500 Roma had returned to the sites from abroad.

The testing will be carried out by military doctors until 9 April.

Authorities have said that the communities could be subject to quarantine should the tests show that the virus is spreading.

Prime Minister Igor Matovic denied on Wednesday that the decision was “a demonstration of power” against the marginalised community, according to the EU Observer website.

“We just want to make use of doctors in uniform to start fast testing in the settlements without further overloading the regular health system,” he was quoted as saying.

Last week, local news websites reported that a Roma settlement in the east of the country was placed under quarantine after a resident failed to self-isolate for 14 days after returning from the UK.

According to the 2011 census, the Roma community is estimated to make up around two per cent of Slovakia’s population, comprising over 100,000 people, although rights groups say the true figure could be much higher.

A report by rights organisation Minority Rights Group International in 2018 found that Roma in Slovakia still confront deep and prevalent discrimination”, with many still living in slum conditions.