Praying in time of COVID-19: How world's largest mosques adapted

As mosques ban congregational prayers due to coronavirus, many set up live-streaming to broadcast prayers and sermons. 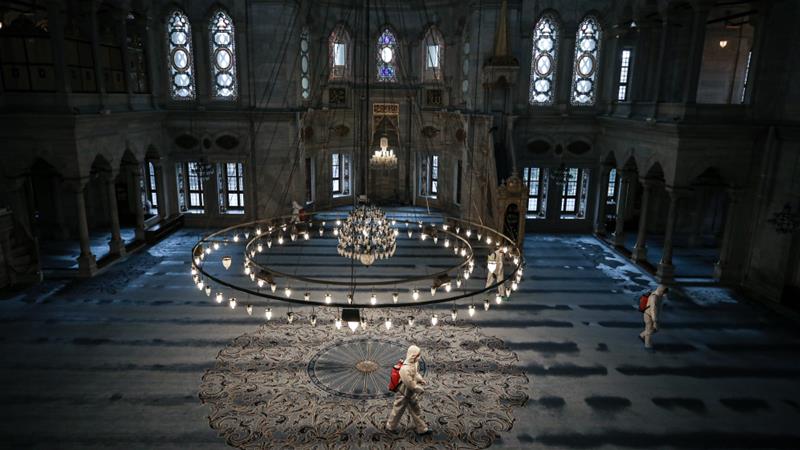 For weeks now, mosques worldwide have taken a series of measures aimed at curbing the spread of the new coronavirus.

As an increasing number of countries announced lockdowns, so did mosques, with many closing their door completely and others banning congregations and using their speakers to remind people to stay at home.

With the global death toll from COVID-19, the disease caused by the coronavirus, exceeding 70,000 and more than 1.28 million cases of infection confirmed, many mosques are trying to keep their communities engaged by using live-streams and local stations to broadcast sermons and classes.

Here’s a look at how some of the world’s largest mosques have adjusted their services in the time of COVID-19: 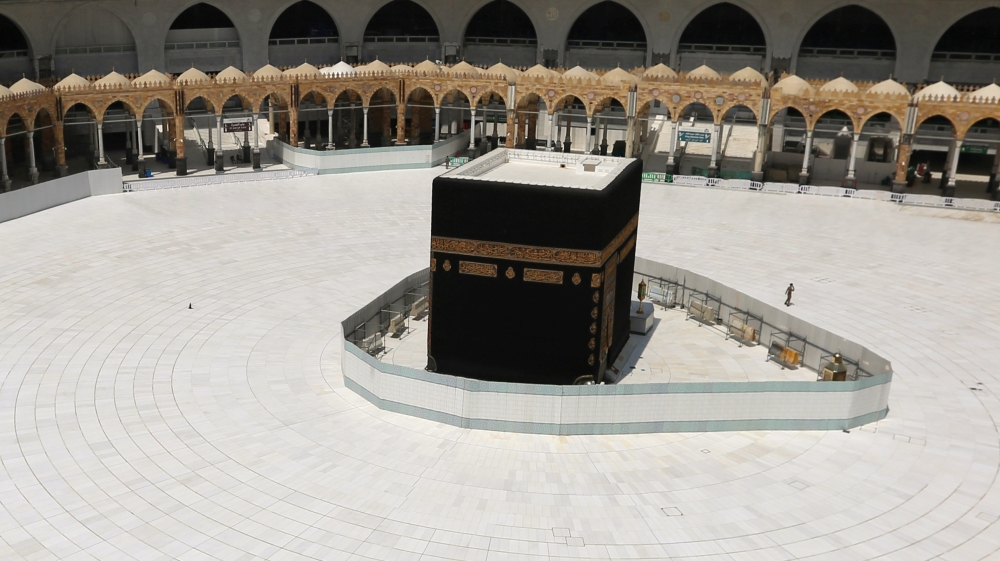 Worshippers have not been allowed to enter Mecca’s Grand Mosque nor the Prophet’s Mosque in Medinah, the two main mosques for Muslims, since Saudi authorities suspended prayers on March 19 in an effort to combat the spread of the virus.

The ban followed a series of other measures in Mecca including: an initial ban on worshippers praying near the Kaaba, the cube-shaped structure in the centre of the Grand Mosque’s courtyard which Muslims across the world pray towards; and a ban on the Umrah pilgrimage, which seven million Muslims perform every year.

It remains unclear if the Hajj pilgrimage, which every able-bodied Muslim must perform once in their lifetime, will be held this year.

Only employees at the Grand Mosque are currently allowed to enter its premises, according to locals.

“For several weeks, the call to prayer has included a line at the end asking people to remain home,” said Mecca resident Fuad Mohamed.

“No prayers nor Friday sermons are held at the Grand Mosque,” added Muhamed, noting that some of the city’s smaller mosques live-stream their sermons online.

Saudi authorities imposed a 24-hour curfew in Mecca and Medina on April 2, forcing residents to stay home at all times other than to buy food or access medical care.

With more than 2,400 confirmed COVID-19 cases and 35 deaths, Saudi Arabia is the worst affected by the pandemic among Gulf Arab states. 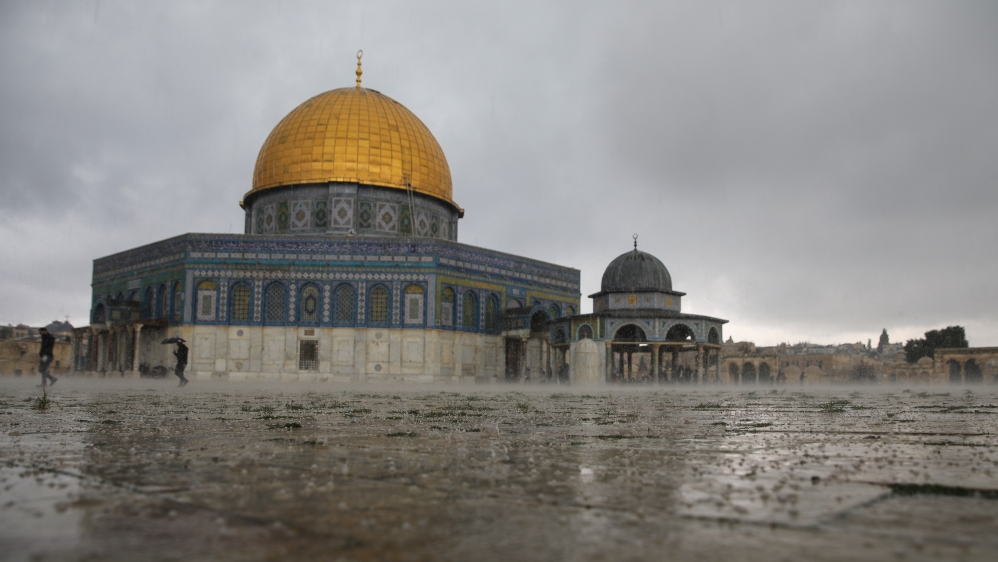 Muslim prayers at Jerusalem’s Al-Aqsa Mosque have been suspended since March 23 until further notice.

The doors of the mosque and of the adjoining Dome of the Rock were shut a week before implementation of the full ban, allowing worshippers to only gather for prayers in the open areas of the compound.

Al-Aqsa compound is where the al-Haram al-Sharif or the Noble Sanctuary is located. It is the third most sacred site for Muslims and the site they believe Prophet Muhammad began his night journey to heaven.

According to Zeinat Abusbeih, who heads security at Al-Aqsa’s female quarters, the compound has been completely shut, with the exception of employees at the mosque

“This has been painful but necessary,” Abusbeih told Al Jazeera, adding that a line calling on people to pray at home was added to the end of athaan (call to prayer).

Abusebeih said that while worshippers are not allowed to attend the Friday sermon, it is still held by the imam with employees at the mosque joining in.

“To keep people around the world feeling connected to Al-Aqsa, security personnel have been live-streaming the Friday sermon and prayer,” she said.

There are more than 8,600 coronavirus cases in Israel and at least 50 deaths. In the occupied Palestinian territories, the ministry of health has confirmed more than 200 infections. 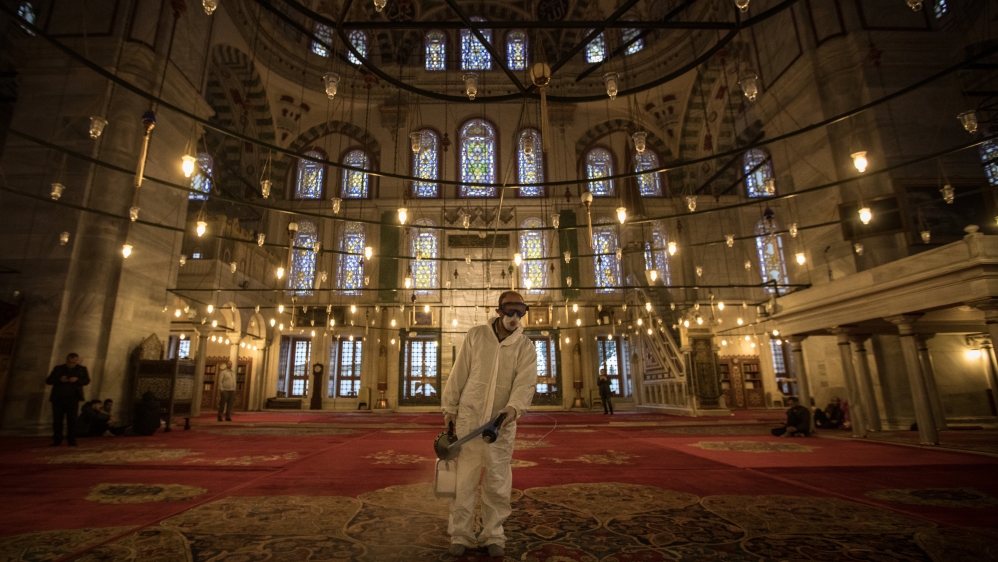 Turkey has cancelled all congregational worship at mosques, including Friday prayers, since March 16.

Many mosques have since added a few lines to the end of the athaan, notifying people of the decision and calling on them to pray at home.

Larger mosques have also been broadcasting prayers through speakers.

While Fatih Mosque, one of Istanbul’s largest and most historic mosques built after the Ottoman Sultan Mehmet the Conqueror, has kept its doors open, congregational prayers are banned.

“Any group prayers are strictly prohibited, but many activities, including classes and Quran reading, are still conducted online,” said Bunyamin Topcu, an imam at the mosque which is also considered a centre for Islamic studies across the Middle East.

“The athaan continues to be called out without additions or omissions. We do not, however, hold Friday sermons nor prayers,” said Topcu, explaining that a single mosque in the capital, Ankara, does that on behalf of the whole country.

“In the evening, some prayers and Quran reading is broadcasted through our microphones,” he said.

Turkey is among the 10 worst-hit countries world, with more than 27,000 coronavirus cases and nearly 600 deaths. 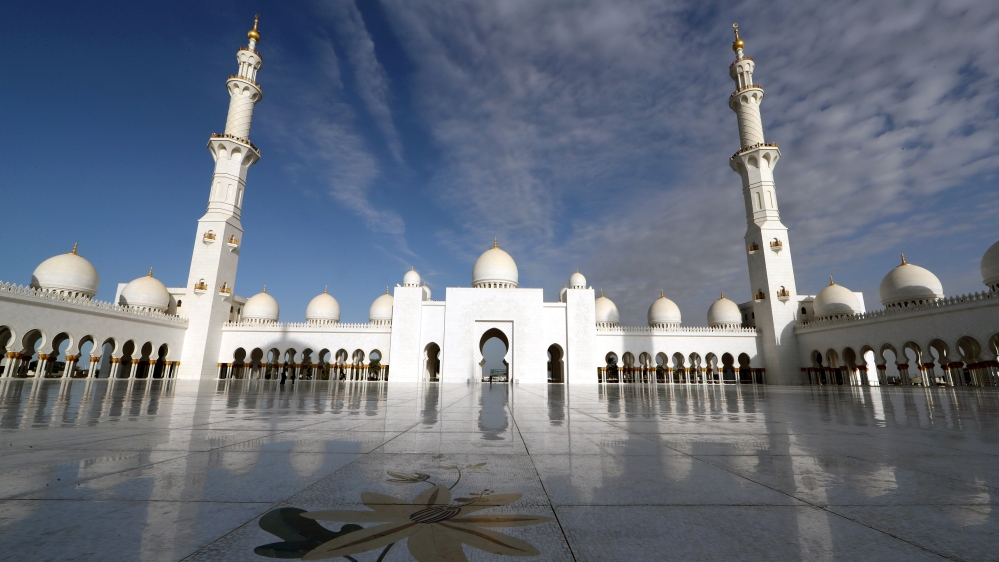 Sheikh Zayed’s Grand Mosque has been closed for prayers and visits since March 15.

Located in Abu Dhabi, the capital city of the United Arab Emirates, the site is the country’s largest mosque and the principal place of worship for daily, Friday and Eid prayers.

As well as being a site for worship, the mosque is also considered a top tourist attraction.

According to Amr Salah, an Abu Dhabi resident and frequent visitor of the mosque, the complex has been completely closed off.

“It is only the athaan that still goes off. It always ends with a line calling on people to pray at home,” he told Al Jazeera.

“This has been the case for all mosques across the UAE, not just the big ones,” he added.

With about 1,800 cases and 10 deaths so far, the UAE has the second-highest number of COVID-19 infections in the Arab Gulf region. 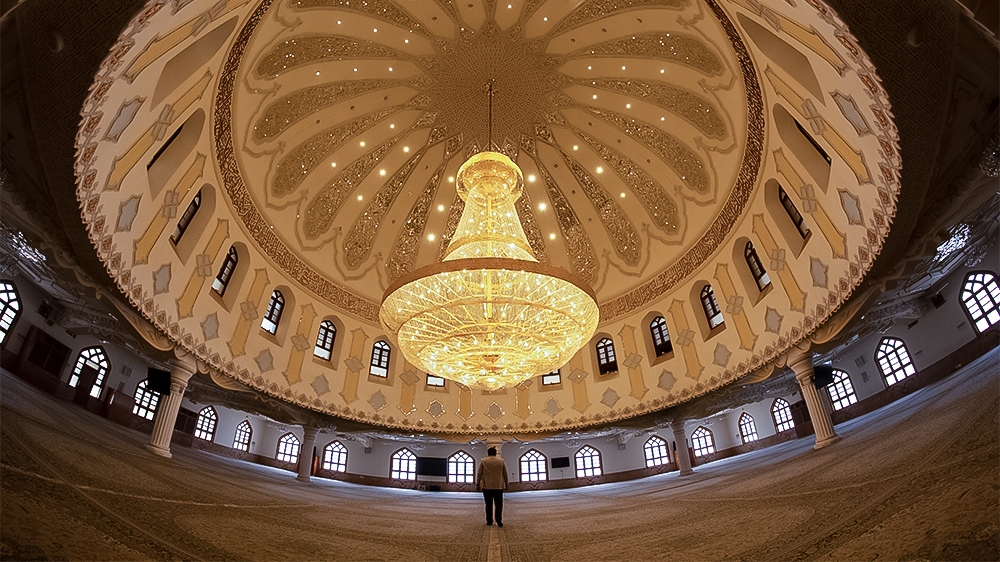 Iraq’s top Shia leader Ayatollah Ali al-Sistani has issued several edicts calling on citizens to social distance and avoid religious gatherings in order to curb the spread of the coronavirus.

Like other mosques across the country, the doors of Mousawi Grand Mosque in Iraq’s southern city of Basra have been shut to worshippers and visitors.

“The athaan hasn’t changed since the onset of the pandemic. But before the athaan or at the end of the day, the mosques always issues a reminder through its speakers that mosques are closed,” Hussein Faleh, a Basra-based photojournalist and resident, told Al Jazeera.

As one of its biggest and busiest mosques in the oil-rich city, the mosque has used a local channel to broadcast the Friday sermon and prayers for Imam Hussein, the grandson of the Prophet Muhammad and a central religious figure for Shia Muslims.

“Not all mosques do this, but because Mousawi Mosque is a central one, the broadcast has been an attempt to keep members of the community feeling connected to their place of worship and their spirits high,” Faleh said.

Iraq, which has imposed a nationwide curfew since March 17, has more than 950 confirmed COVID-19 cases and 60 deaths. 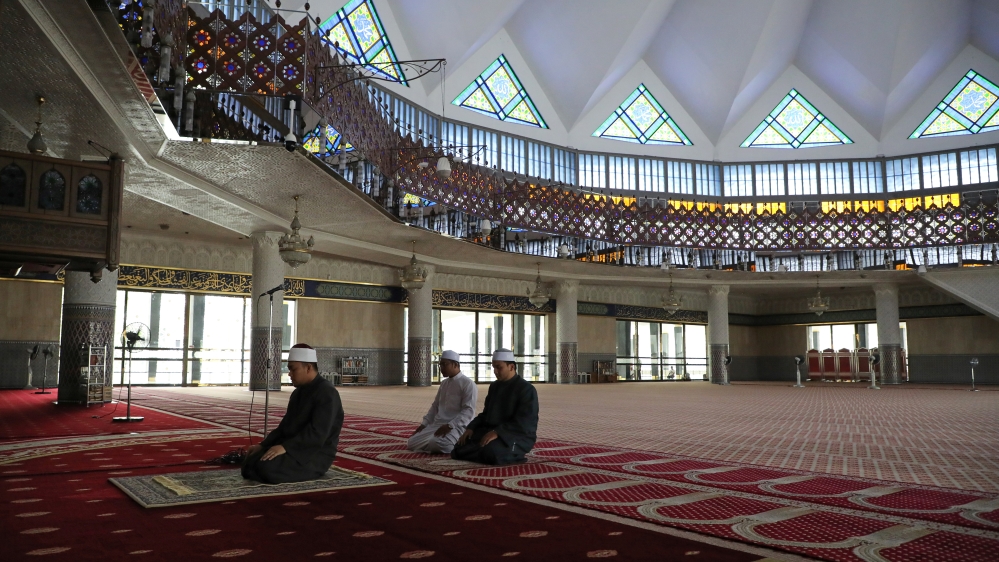 Malaysian authorities have imposed a movement control order since March 17.

According to Siti Syuhada, a Kuala Lumpur resident, the directive has meant that all mosques are closed off to the public, with only the imam and staff members allowed to enter.

At Malaysia’s National Mosque, a tourist attraction and key religious hub in the capital, the mosque has continued to make the five daily calls to prayer.

“At the end of the call, the muezzin [caller to prayer] reminds people in Malay to perform their prayers at home,” explained Syuhada, adding that many classes are being conducted online via Facebook, YouTube and Zoom.

“Friday prayers are not being held, and as per the movement of control order, people pray at home with their families,” she added. 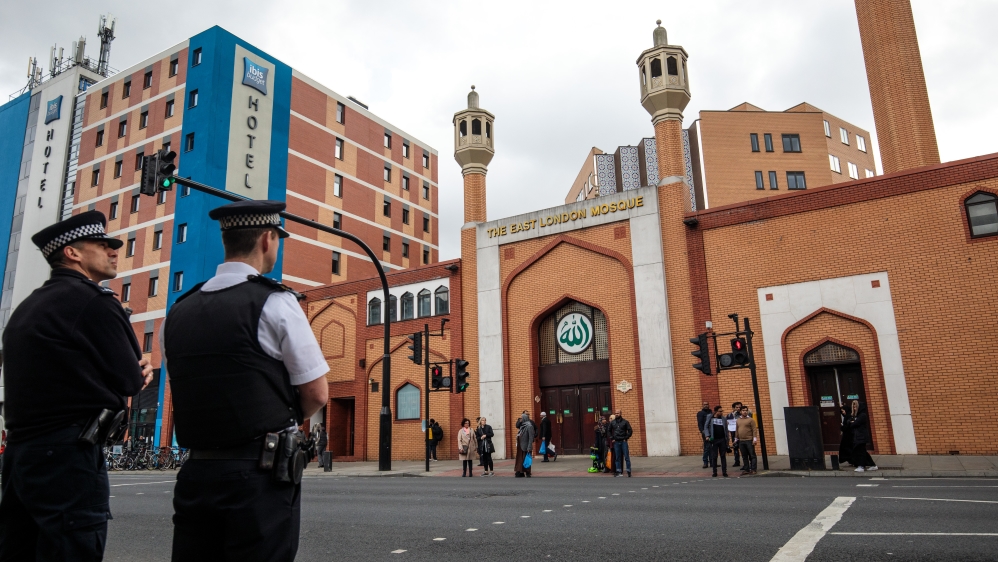 After taking an initially restrained approach to curbing the spread of the virus, UK Prime Minister Boris Johnson announced a nationwide shutdown on March 24, closing public spaces and banning people from leaving their homes unless for necessary purposes.

Before the move, Muslim associations including the Muslim Council of Britain (MCB), called on leaders of UK mosques to prepare for a suspension of communal prayers by setting up video links to live-stream sermons and activities.

At the UK’s largest mosque in the London Borough of Tower Hamlets, the East London Mosque (ELM) has banned the entry of all members of the public.

But the ELM, one of the largest mosques in Europe, still broadcasts the five daily prayers, as well as the Friday prayer and sermon via its Adhan Radio and YouTube and Facebook pages, according to trustee Abdallah Faliq.

“In the athaan, we’ve replaced hayaa ala al-salah [come to prayer] with the words sallu fi buytutikim (pray in your homes),” said Faliq, adding that ELM is the only mosque in London allowed to broadcast the call to prayer from its minaret.

Faliq explained that other services, including talks and classes, are also carried out online. 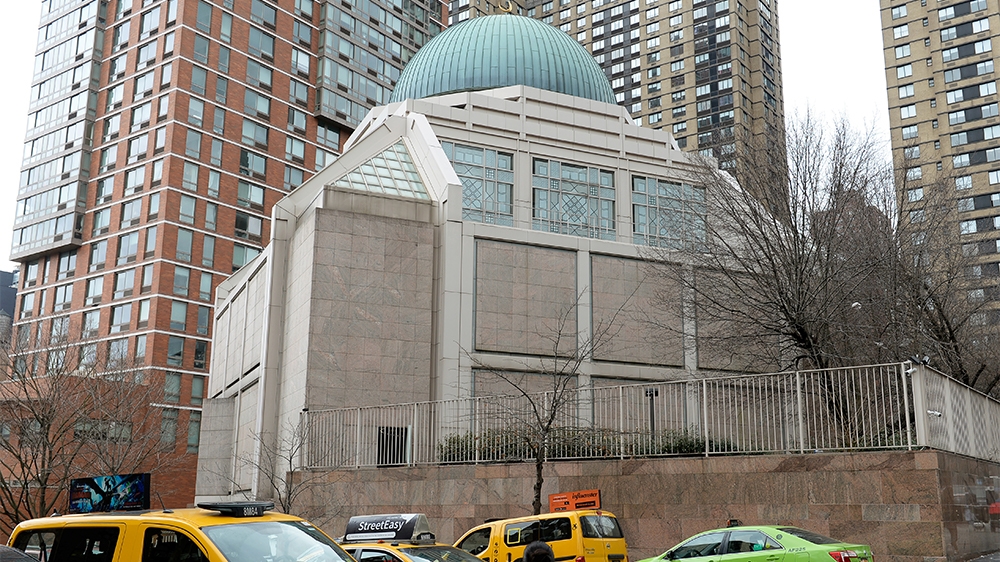 As of March 20, the Islamic Cultural Centre of New York, which is one of the largest mosques in the US city, banned all congregation including Friday prayers as well as weekly and weekend classes, according to its website.

Meanwhile, the building housing New York University’s Islamic Centre, which acts as a busy community and student hub for Muslims in New York City, has also been closed.

According to the centre’s website, Friday prayers have been suspended, but regular classes and activities are being conducted virtually via Zoom and Facebook Live.

US President Donald Trump issued a travel warning from March 28 for the hard-hit New York area to limit the spread of the virus.

Topping the list of countries with confirmed COVID-19 cases at more than 330,000 cases, the United States has also reported more than 1,500 deaths.