Terrifying footage of protesters in Paris having water canons turned on them has emerged. Several hundred people gathered in France’s capital to not only mark the two-year anniversary of the Yellow Vests demonstrations but also to come out against the Government’s new Global Security Bill. While the majority of the rally was reportedly peaceful, several disturbances ended in clashes with the police.

In one video, a water canon on top of a truck could be seen spraying protesters to disperse them.

In another, a group of gendarmerie, a military force with law enforcement duties, are forced to take refuge in a building hall.

One protester throws a projectile at them, while an officer sprays him with an unidentified can.

In other footage, a large fire can be seen in the middle of St. Germain blvd and flares are thrown throughout the street. 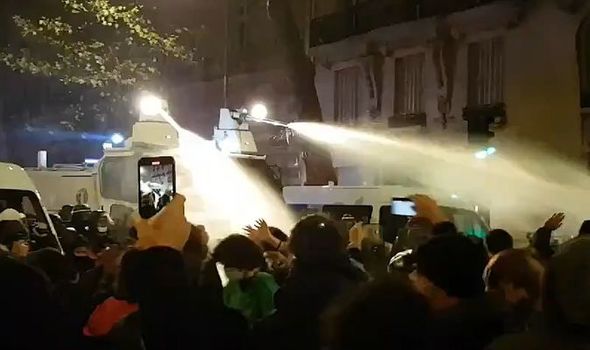 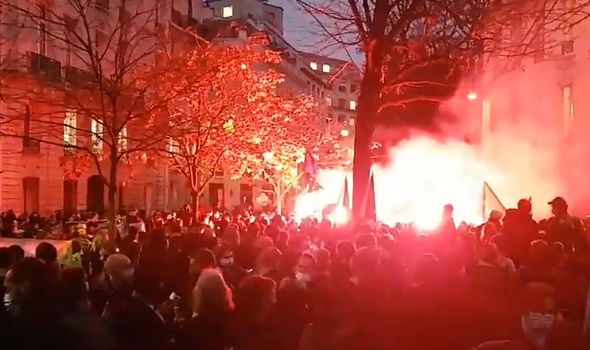 The protesters met just a few hours before the bill was to be debated in the National Assembly.

The bill seeks to make it unlawful to disseminate photos of French police officers or gendarmes in which they can be identified.

Any picture or video with an “identifying element of an officer when engage in a police operation” and “with the aim or harming their physical or psychological integrity” could be subject to a a year in prison and a maximum €45,000 (£41,000) fine.

Activists and journalists are worried that the legislation could compromise press freedom. 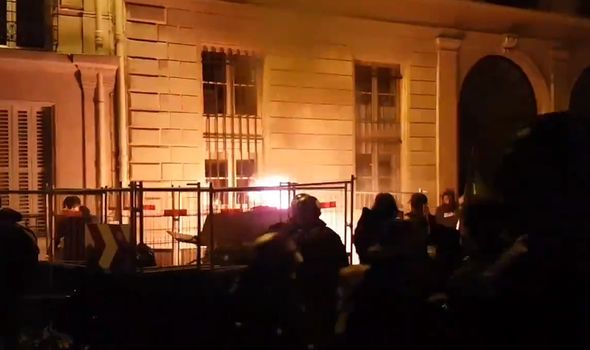 One group of French lawyers, the Black Robe Brigade, denounced the bill as an “attack on democracy and freedom of expression”.

At the protest, Human Rights League LDH warned: “You, journalists, you could be arrested, handcuffed, placed in police custody and brought before a court.”

Demonstrators outside the Assembly could be heard chanting: “Paris, stand up, lift up.” 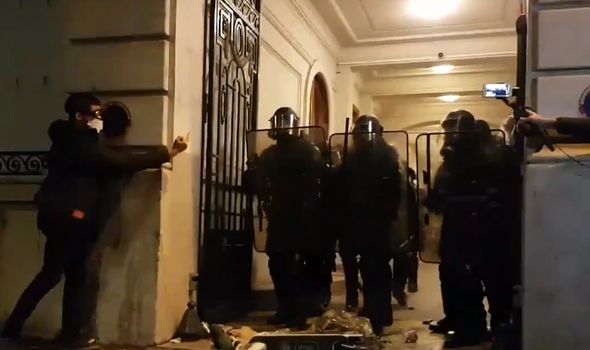 The interior ministry, Gérald Darmanin, has defended the law, claiming that it aims to protect police and gendarmes who have been increasingly targeted and threatened.

About 40 journalist organisations have signed a statement asking him to remove the clauses that are likely to “undermine the freedom to inform”.

Reporters Without Borders, a press freedom watchdog, said in a statement that the article was based on a “slippery concept”.

This is due to the fact that intent is “open to interpretation and hard to determine”.