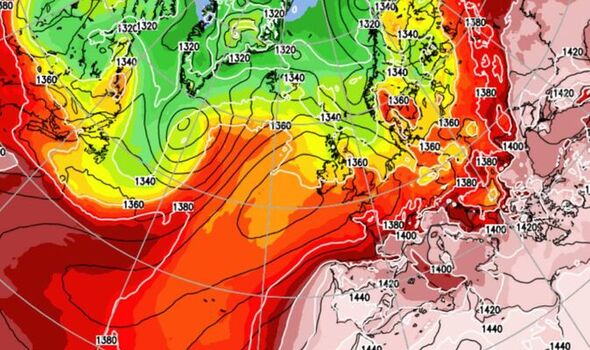 Temperatures across the UK will rocket towards the 30Cs this week amid warnings of an imminent ‘major heatwave’.

Sizzling golden rays will boil the mercury until the middle of July, driven by a huge area of high pressure building across the UK.

This will be driven by an oceanographic event happening 7,000 miles away in the eastern Pacific Ocean.

Falling sea temperatures off the South American coast are driving a La Nina ocean-cooling event, a phenomenon known to have a knock-on effect on global weather patterns.

John Hammond, meteorologist for Weathertrending said: “The key to this warmer and drier trend across the UK lies in the faraway tropics, and an interaction between the ongoing ‘La Niña’ with a pulse of atmospheric convective energy traversing the tropics from the west.

“Through a chain reaction, this will affect pressure patterns more widely across the globe and will ultimately help to build high pressure from the Azores across the UK.

“The upshot will be several days of dry and, often, warm weather.

“Just how hot it gets will depend on whether the high pressure migrates far enough eastwards to usher air in from a ‘baking’ near-Continent.” 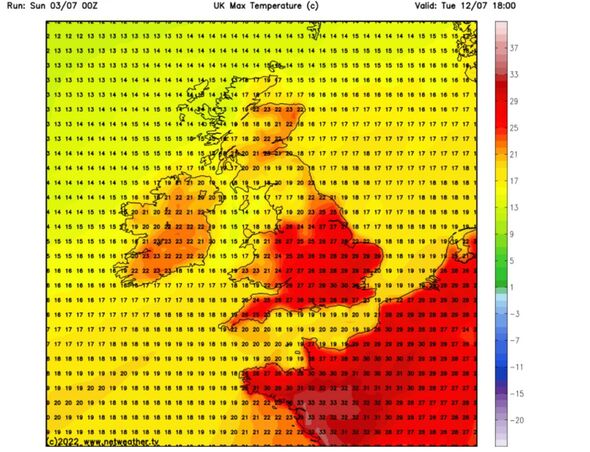 La Nina is the counterpart to El Nino–a phenomenon which sees ocean temperatures rise in the east Pacific and is the ‘warm phase’ of the El Nino-Southern Oscillation.

Both La Nina and El Nino impact weather around the world including driving warmer UK summers and colder winters.

The immediate influence will be to force the Azores High–a semi-permanent high-pressure system over Atlantic Azores Islands– towards the UK.

The high will start reaching for the UK at the start of next week before thermometers ramp up ahead of the weekend.

It will then stretch into Britain in the run up to mid-month allowing temperatures to rocket even higher, forecasters say.

Jim Dale, meteorologist for British Weather Services, said: “The Azores High is going to start pushing towards the UK at the start of the week.

“Temperatures will start pulling up as we head towards next weekend, and initially we are looking at highs of 28C or 29C.

“As we go into the following week and start heading towards mid-month, we could be looking at 30C.”

Hot weather will grip almost the entire country with just the north of Scotland, closer to the jet stream, staying cooler.

“Northern Scotland will be closer to the jet stream, so here it will stay cooler, although it will still be pleasant.

“After the middle of the month, there are signs that this region of high pressure will move away from the UK allowing a cooler, more pleasant spell of weather to establish.”

Britain could be facing a major heatwave in the next fortnight with sustained temperatures in the 30Cs.

Exacta Weather forecaster James Madden said: “From the middle of the week high pressure will start to become dominant and temperatures will rise bringing a spell of hot weather which could hold out for the following seven to ten days.

“Temperatures will rise into the 20Cs to start with before rising even higher in the run up to mid-July.

“There is a chance that we could see highs in the 30Cs over the next couple of weeks as the nation prepares for the next major heatwave to take hold.”