One Martini, Ice Cold, With a Blanket and a Scarf

Drinking outdoors in the winter, thanks to Covid, can be painful, but bar owners are trying to make it feel like fun — or at least less frigid. 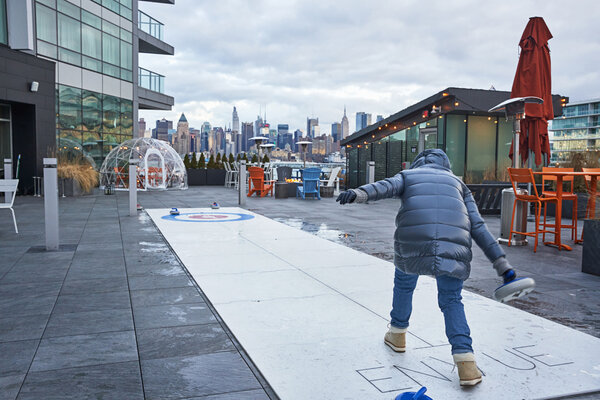 In winters past, Del Pedro, an owner of Tooker Alley in Brooklyn, responded to snowfall by inviting a group of friends to drink martinis in the bar’s frigid backyard. Called the Polar Bear Martini Club, the gatherings were a wry gesture of hearty determination tossed into the teeth of inclement weather.

But what was once a goof has become an imperative. Faced with a winter in which New York City’s Covid rules allow only outdoor seating, Mr. Pedro is taking the club public. For $75 a head, including drinks and food, customers will be able to enjoy the privilege of drinking in the bar’s backyard for a reserved time of up to three hours. At the end of the session, they receive a signed, dated and numbered certificate as a bona fide club member.

Sitting and drinking in the cold may sound like a path to frostbite — alcohol is known to lower body temperature. But this season, bar owners across the Northern United States are casting about for creative ways to make the experience seem more attractive, and even comfortable. 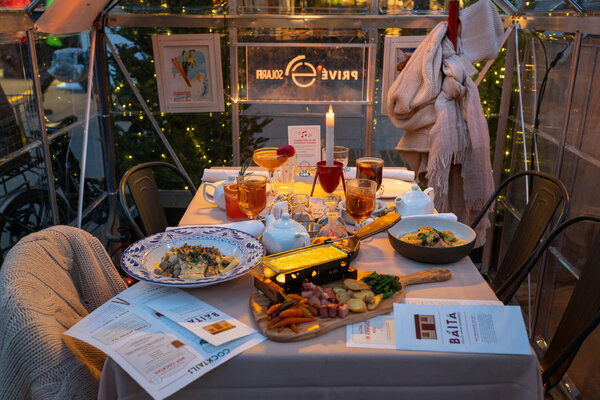 They’re luring shivering patrons not just with shelters and heat lamps, but with blankets, seat warmers and hats; with curling rinks and fondue pots; with steaming pots of mulled wine and do-it-yourself toddies; and with playful dares to prove you can endure, and even enjoy, the chill.

At the Settle Down Tavern in Madison, Wis., Brian Bartels’s version of the polar bear club is called the Tundra Club — a reference to the famed “frozen tundra” of the Green Bay Packers’ gridiron. “We wanted people to feel inspired and drawn into the tailgating mentality,” said Mr. Bartels, a co-owner of the tavern. “If you go up to Lambeau Field, you’re outside for two hours before the game.”

Club members (anyone who buys food and drink) can warm themselves at four open fire pits. They receive an official Tundra Club patch and a credit with each purchase. Those who rack up 10 visits will be eligible for prizes come spring, along with a free margarita on the first 80-degree day.

Caroline Marks, a legal assistant, recently became member No. 24. “The little outdoor seating area is awesome. It’s fun,” she said. “And in the situation we’re in right now, I’ll take it.”

Walk into one of the temporary outdoor “chalets” at Baita, a restaurant at Eataly in the Flatiron district of Manhattan, and you’ll find a coat rack draped with scarves, hats and blankets by the Italian knitwear brand Falconeri that customers can buy if they’re feeling underdressed.

The drinks menu includes a $3 brodo shot, made of chicken broth, whiskey and sherry; hot versions of classics like the Negroni and Cosmopolitan; and the option to build your own hot cocktail, with an array of spirits, spices and garnishes.

At Hunky Dory. a Brooklyn bar and restaurant that reopens in February after a six-week winter break, each chair has a plastic seat warmer — the kind used to make chickens hatch eggs — that heats up when you sit down. Hand warmers will be sold for $5; for $30, you can buy a blanket. And for $50, the bar will store it in its own cubby, ensuring that the blanket awaits every time you visit.

Après-ski habits have found an urban footing. The Lavaux, a Swiss wine bar that opened in October in the West Village, offers four different fondues, for parties of two to four who are comfortable with sharing food in the pandemic. Additional fondue pots have been marshaled to hold full bottles of vin chaud, hot mulled wine. L’Oursin, a Seattle restaurant and wine bar, is also experimenting with outdoor fondue, piping Alpine music onto its patio to complete the effect.

“The vibe just seemed seasonally appropriate,” said Zac Overman, the beverage director at L’Oursin, “and certainly falls into the comfort-food zone that it seems everyone is craving these days.”

Marcus at Nohu, the chef Marcus Samuelsson’s rooftop bar at the Envue Hotel in Weehawken, N.J., has a curling rink that guests can use for free (or reserve for $30), with equipment and scorecards with instructions. The rink made its debut last winter, but feels particularly apt this year. “It’s been successful,” said Matthes Metz, the general manager. “People like to play and have a hot drink.”

In Milwaukee, Bryant’s Cocktail Lounge has pivoted from its usual holiday fare of creamy Tom and Jerrys to mezcal and rum drinks, served at an escapist pop-up bar called Armonia. There are heated tents, but not everyone uses them.

“I’ve been surprised by how many people are sitting outside,” said the owner, John Dye. “I would almost say people are enjoying the adventure.”

The nature of some of these amenities remains as fluid as everyday life currently is. Mr. Pedro is still fine-tuning the bylaws of his Polar Bear Martini Club. It will likely take place on weekend days in midafternoon, when the sun can temper the cold. But, if the day is too warm, he may push arrival time back to 4 p.m.

“You’re not getting the certificate just for showing up,” he said. “You have to prove your mettle!”