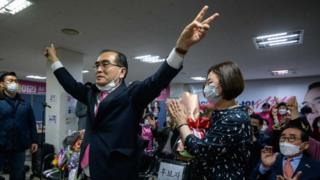 Thae Yong-ho has become the first ever North Korean defector to win a constituency seat in South Korea.

Mr Thae was once North Korea’s deputy ambassador to the UK, but defected in 2016 with his family, becoming the highest-ranking North Korean official to ever do so.

He was running as the opposition United Future Party’s main candidate in the affluent district of Gangnam of Seoul.

He won by 58.4% and was seen crying after his victory was announced.

He said ahead of his victory that he hoped his running would send a message to the elite in North Korea about what could happen if they turned their back on the regime.

“I want to tell them that there is a new way for their future,” he said.

South Korea held its parliamentary elections on Wednesday which saw a record turnout of 66.2%, despite voting taking place in the middle of a virus outbreak.

The party of President Moon Jae-in – the Democratic Party – won a resounding victory , taking 163 seats in the 300-seat National Assembly.

Thae Yong-ho could have lived a quiet life in South Korea. Instead he has used his platform to openly denounce Kim Jong-un’s regime and highlight the various challenges faced by the 33,000 defectors who have made it to the South.

He has even changed his name to Ku-min, which means “saving people”.

He has cast a colourful figure during the campaign and rapped in his own campaign song wearing a pink baseball cap. When not pounding the pavements of Gangnam, he was holding chats over social media.

It was a safe seat. However, Thae’s victory in the heart of South Korea’s richest district is still remarkable.

Whatever the politics of this win, it is such a positive signal for other defectors who’ve risked their lives to come to the South.

You’ve also got to wonder what they’re thinking in Pyongyang right now as someone who was once part of their regime steps into the South’s National Assembly.

Mr Thae defected to the South in August 2016, saying he had become increasingly aware of the “gruesome realities” of life in North Korea. 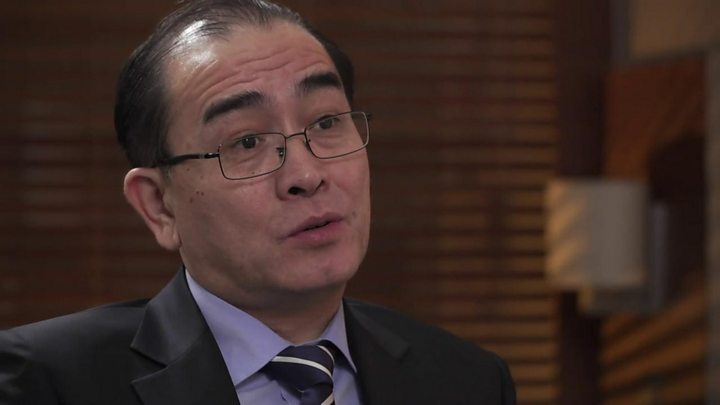 Speaking to a South Korean parliamentary committee, he said North Koreans were living in conditions amounting to slavery.

After his defection North Korea called him “human scum”.

The North’s state media said the envoy had been accused of leaking secrets, embezzlement and child rape.

About 1,000 people defect from North Korea each year, fleeing a repressive state that has faced numerous accusations of human rights abuses.