Migrant Crisis: Boat used to cross the Channel traced to shipyard near Rotterdam

A boat used by 13 migrants to cross the English Channel has been traced by Sky News to a boatyard hundreds of kilometres away in the Netherlands.

The owner of the boatyard is fearful people smugglers may target him and his family if he reveals details of the people he sold the boat to.

Home Secretary Priti Patel is now considering using new tactics that would turn migrant boats away back to France.

One analyst told us that tracking where the boats have come from, as our investigation has done, could be more effective in disrupting the smugglers.

On 20 July helicopter footage showed a small orange dinghy packed with people landing at Dungeness. They were just a few of the more than 13,000 migrants who have made the same journey by boat this year. 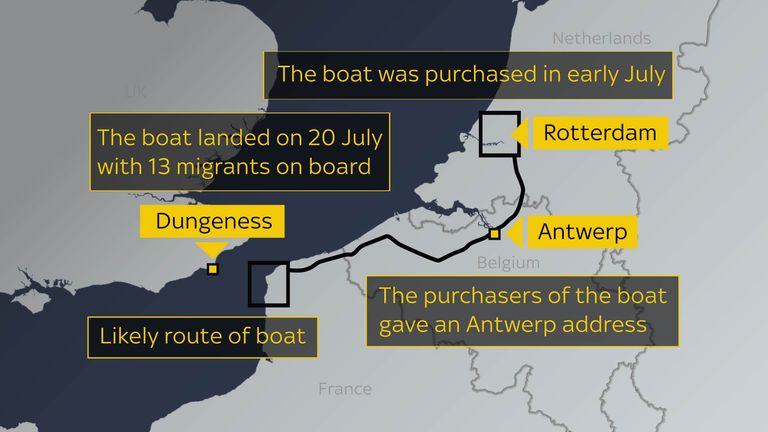 Tracing the dinghies used to transport migrants is difficult. They are often launched at night after being stolen from marinas and boatyards throughout northern Europe.

The boat seen on 20 July had two distinctive features however – its bright orange colour and a registration number seen on one side.

A reverse image search of a still from the footage didn’t at first identify the boat. But hidden on page 16 of the results was a picture of a dinghy that looked remarkably similar to that which washed up on Dungeness. 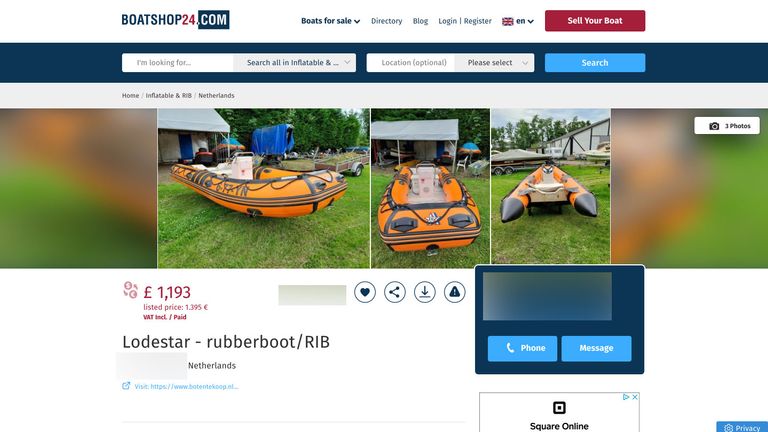 The image featured on the website of a boat dealership near Rotterdam in The Netherlands.

This picture shows the registration numbers match between the boat pictured in the UK and the one in The Netherlands. The make of the boats pictured is also the same – Lodestar. 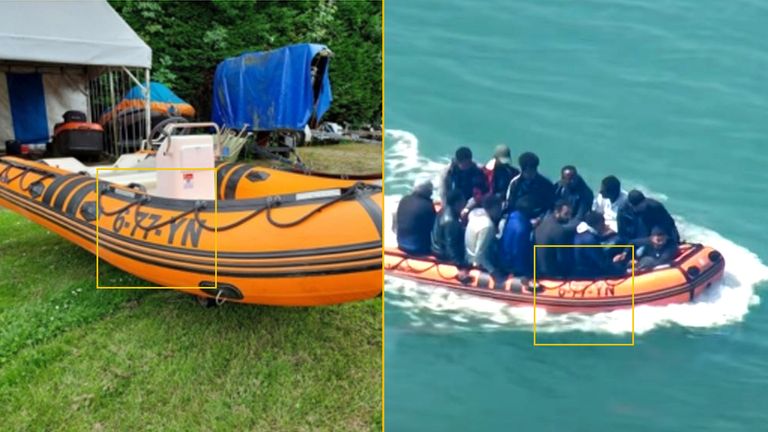 The boat was still listed for sale, suggesting the website had not been updated since it came ashore. The steering console had also been removed since it had been sold – which could allow extra space to pack in more people.

The owner of the boatyard selling the vessel, Hans, revealed that it had been purchased by a couple in their mid 30s a few weeks prior to 20 July. The purchasers were a woman believed to be from Belgium and a man who spoke a language the owner did not recognise.

The couple paid in cash – €700 – and gave an Antwerp address when completing the payment.

The price paid for the boat is a fraction of the several thousand euros smugglers charge each migrant.

Hans was unaware the boat had been used to transport migrants before being contacted by Sky News, but he was not surprised. It is the third time in two years that boats he once owned were linked to immigration crimes. 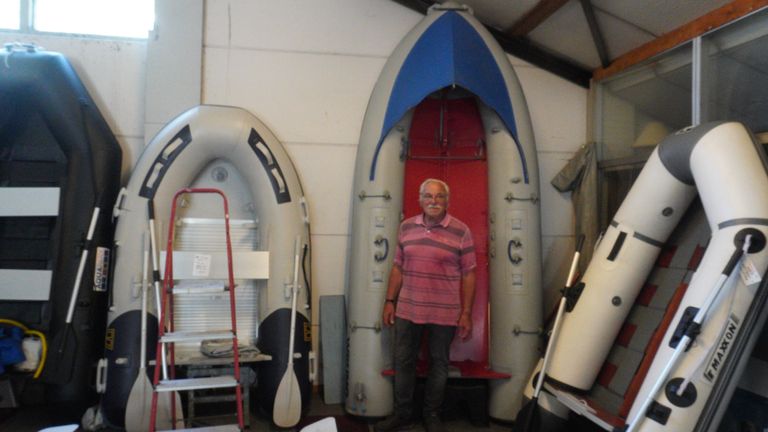 Typically, smugglers in northern europe speak the same languages as the migrants, helping to organise their passage across the channel.

Hans has now instituted a policy at his boatyard that he will no longer sell to customers who don’t speak a language he recognises.

He was reluctant to give further information about the couple who bought the boat, fearing people smugglers would retaliate against him.

For this reason we have chosen not to directly identify the boatyard, or Hans’ full name.

In a previous incident in 2019 three men, who Hans believed were Syrian, struck a deal to purchase a boat, nine life jackets and an outboard motor from him. After having helped them load the boat into a van, the men took off without paying.

Clear images were captured on the boatyard’s CCTV systems of the men and their vehicle. Despite this, the Dutch police have had no success in catching the perpetrators. 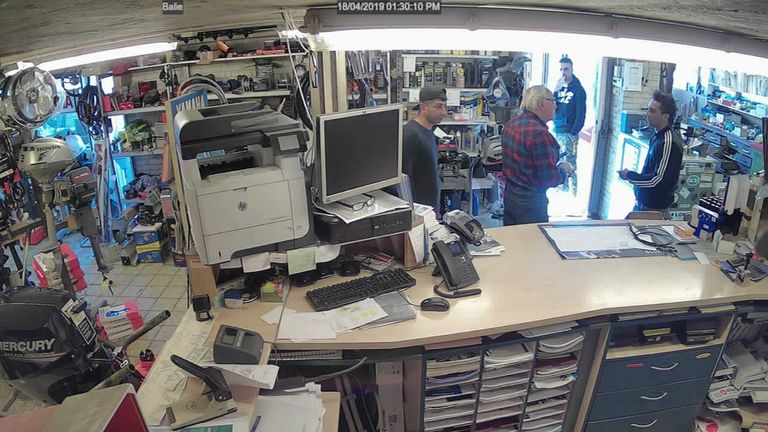 The Royal Marechaussee, the Dutch force that combats immigration crime, told Sky News they were unaware the boat bought near Rotterdam in July was used to facilitate migrant crossings.

The journey the boat took to the UK likely involved passing through three other countries, each with multiple border agencies and local police forces.

Cooperation is necessary if the people smugglers are to be stopped. The UK agreed to provide £54m earlier this year to fund French authorities’ efforts to stem the flow of migrants crossing the channel.

But some experts have questioned whether the will exists amongst local police forces to tackle the problem.

Roxane de Massol de Rebetz, who researches people smuggling in northern Europe at the University of Leiden, said: “Immigration enforcement is a federal issue, it’s not in local police plans. The local mayor might question why police forces are spending time on immigration issues and not on burglaries. And that’s just at the national level, on a European level member states may be happy when migrants leave their territory.”

Even where the will to cooperate does exist, tracking the small and cheap boats used to cross the channel is difficult.

There is no obligation to register boats, and when they are, registration numbers can be easily changed. The orange boat which came ashore on 20 July was missing a first character from it’s registration, which had either fallen off or been removed. The Vehicle Authority Agency in the Netherlands confirmed the full registration number to Sky News as 76-77-YN, but they required the owner’s permission to reveal who the boat belonged to. This permission was not given.

More effectively tracking the boats and outboard motors used could be one way for authorities to target the criminals behind this activity.

Lucia Bird, a senior analyst at the Global Initiative Against Transnational Organized Crime, said: “Seeking to track the hardware that is being used is a positive way of approaching this. Sanctions would drive greater due diligence around who companies or individuals are selling boats to.”

Alternatively, targeting the migrants themselves with additional patrols could encourage them to launch from riskier places where the authorities are not present.

Lucia Bird continued: “what we see again and again is that in trying to block the flow of people, you don’t block it, you displace it. We’ve seen this pattern in every smuggling route there is, and with maritime departures, you see them becoming more remote and more complicated as a departure point.”

The Data and Forensics team is a multi-skilled unit dedicated to providing transparent journalism from Sky News. We gather, analyse and visualise data to tell data-driven stories. We combine traditional reporting skills with advanced analysis of satellite images, social media and other open source information. Through multimedia storytelling we aim to better explain the world while also showing how our journalism is done.