The sunny skies of May are a thing of the past as this weekend heavy rain, thunderstorms and hail have hit the UK. This afternoon the south of England has been hit by thunder, lightning, heavy rain and hail as the skies turned grey.

According to lightningmaps.org, lighting is striking across London, Essex, Oxford and St Albans, as well as Cambridge and Norwich.

Hail has accompanied the thunder and lightning, with skies turning dark grey as thunder clouds track across the south of England.

The thunderstorms, heavy rain and hail are due to an “unseasonably deep” low-pressure system moving south from Scandinavia.

Met Office forecaster John Griffiths said: “The weekend will begin wet for many, with the heaviest showers over northern and east England by lunchtime. 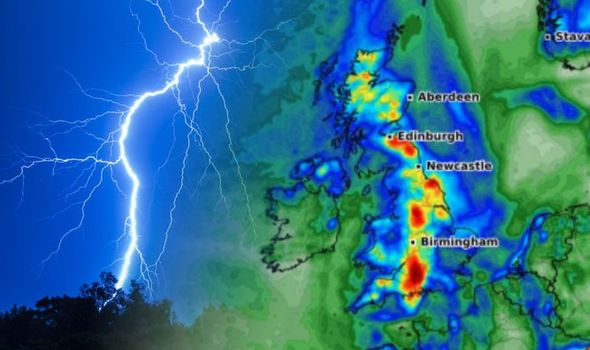 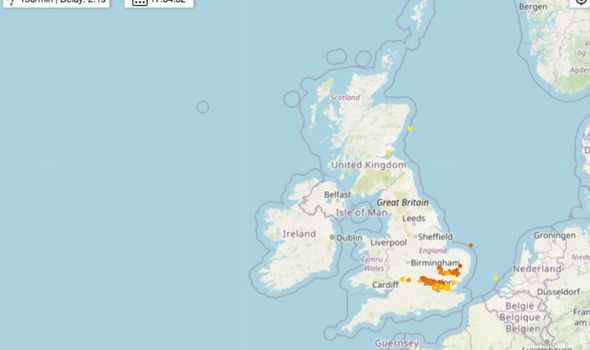 “London and the south-east will also see dark clouds and torrential downpours in the afternoon, while parts of Wales will be rainy for most of the day.

“There is a possibility of thunderstorms on the east coast of England by the early afternoon with strong gales hitting the area.”

Netweather’s latest forecast predicted the dry start in the south would not last, as a band of rain across North Wales, the Midlands and East Anglia moves in fragmenting into scattered showers as it comes.

Otherwise, for most parts, it’s a story of sunny intervals and scattered blustery showers. 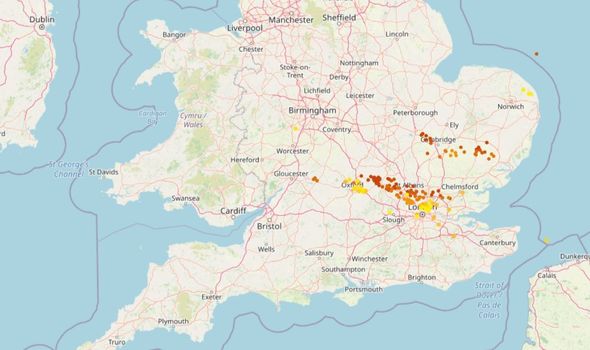 Some in the East will be heavy giving local hail and thunder, with the best of the weather today over sheltered parts of central and southern Scotland and towards the South coast.

A fresh and blustery West or North Westerly wind will give strong or gale-force gusts of up to 45 or 50mph along exposed coasts making it feel cold, especially when a  shower comes along.

As a result, it’ll be rather cool, with top temperatures mostly in the range 12 to 17C, but in the brighter spots, 18 or 19C is possible by this afternoon.

This is a drastic drop from the highs of 28C at the end of May – which the Met Office said was the sunniest month on record.

This Evening and Tonight

Showers in the south will tend to ease away, with clear spells developing, allowing it to turn chilly, particularly for rural areas.

Distinctly cool with some drizzly rain for much of eastern England and northern Scotland.

Many other parts will be brighter with only isolated showers and feeling reasonable in the sunshine.

Outlook for Monday to Wednesday:

A cold start Monday, then mostly dry with sunny spells. Sunny spells on Tuesday but with rain spreading into the northwest later.