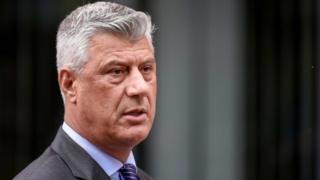 Kosovo President Hashim Thaci has been accused of war crimes by a special international prosecutor in The Hague.

Mr Thaci and nine others “are criminally responsible for nearly 100 murders”, torture and enforced disappearances, the prosecutor said.

The accusations – covering Kosovo’s independence war against Serbia in 1998-1999 – have to be confirmed by a judge at the Kosovo Specialist Chambers before formal charges are announced.

Mr Thaci has denied all charges.

In its announcement, the Special Prosecutor’s Office (SPO) said it had filed a 10-count indictment with the KSC “for the Court’s consideration”.

“The Indictment is only an accusation. It is the result of a lengthy investigation and reflects the SPO’s determination that it can prove all of the charges beyond a reasonable doubt,” it said.

Allegations of organ-trafficking against the Kosovo Liberation Army (KLA) – the rebel movement that Mr Thaci led – were first set out by a former Hague war crimes prosecutor, Carla del Ponte in 2008. The EU-backed court was set up to investigate the claims.

Kosovo’s government has angrily denied the allegations, calling them “baseless and defamatory” ahead of the publication of a report in 2011.

Mr Thaci has been in power in Kosovo since the end of the war – most recently as president of Kosovo.

Kosovo declared its independence in 2008, something Serbia still does not recognise.

Mr Thaci was due to travel to Washington DC for planned talks with Serbia’s leadership in the White House on Saturday.