Iran's Rouhani says COVID-19 measures may be eased within weeks

In televised address, Iranian president says it is crucial for sanctions-hit country to resume economic production. 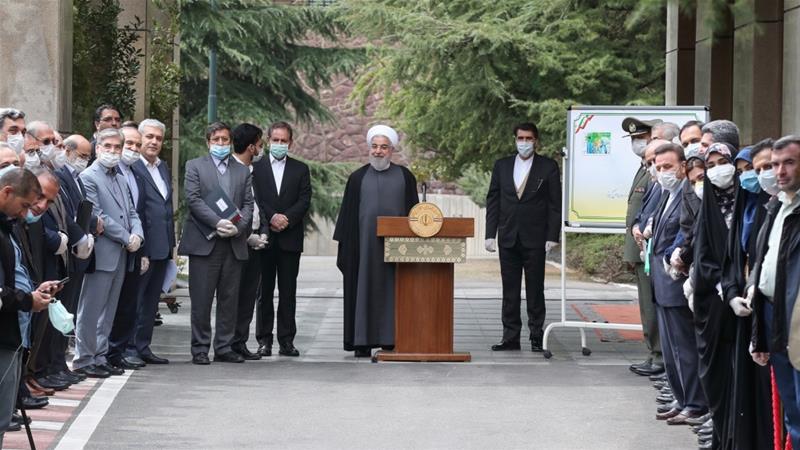 Iran’s President Hassan Rouhani has said he expects measures taken to combat the spread of the highly infectious coronavirus, including social distancing, to be eased within the next two to three weeks.

Accusing “counter-revolutionaries” of attempting to shut down economic production, Rouhani said in a televised address on Saturday his country “has to do everything” to return economic activity back to normal.

Iran is one of the hardest-hit countries worldwide by the virus, with an official death toll only behind Italy and China. On Saturday, the health ministry’s latest tally said the death toll had risen by more than 100 to 1,556, while the number of infected people stood at 20,610. A total of 7,635 people have recovered in Iran.

“This is a country that has lost patience with its own government over a series of crises that the country has experienced in the last few months,” he said.

Already reeling from years of economic sanctions following US President Donald Trump’s 2018 withdrawal from a nuclear deal Iran had signed with world powers three years earlier, the country’s inability to procure badly needed medical equipment from international markets has hampered its efforts to combat COVID-19, the disease caused by the virus.

Since announcing its first two COVID-19 deaths in the holy Shia city of Qom on February 19, Iran has taken a series of steps to contain the virus.

It has closed schools and universities until early April, as well as four key pilgrimage sites, including the Fatima Masumeh shrine in Qom.

In a speech marking the start of the Persian new year, known as Nowruz, Rouhani on Friday defended the government’s response to the outbreak in the face of widespread criticism that officials acted too slowly and may have even covered up initial cases before infections rapidly spread across the country.

He also praised doctors and nurses for their courage in fighting COVID-19, the disease caused by the coronavirus.

“Our nation has managed to reach its goals, despite difficulties … Iran will overcome the coronavirus with unity,” Rouhani said.

Iranian authorities have asked people to avoid all travel during the Persian New Year holidays, which usually sees almost all citizens take to the streets. But the pleas have been ignored by many.

According to the Iranian Red Crescent, about three million people have left the 13 worst-hit provinces by road since March 17.

Health ministry spokesman Kianoush Jahanpour said on Saturday there was “a minority who did not follow the guidelines”, warning that provinces popular with tourists would not welcome visitors for the Nowruz holiday.