Greece condemned over ill-treatment of refugees held on ship 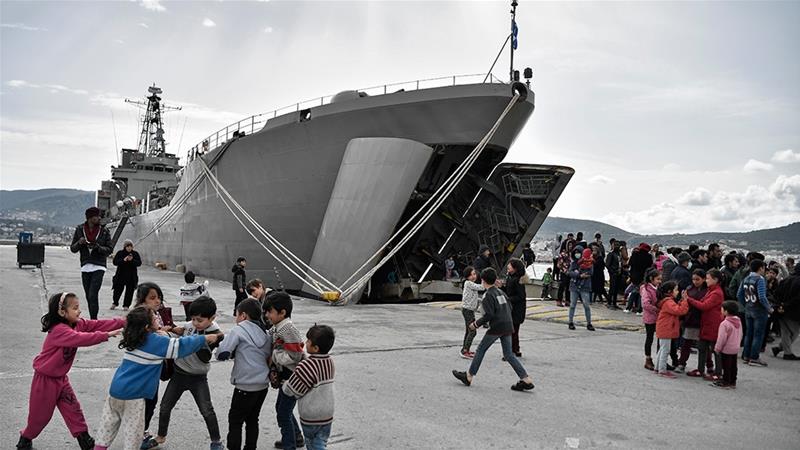 Human Rights Watch (HRW) has called on Greece to reverse its “draconian policy” towards more than 450 refugees and migrants detained on a navy ship docked in Mytilene port on the island of Lesbos.

The men, women and children are among those picked up by the Greek coastguard since late February when Turkey decided to stop preventing asylum seekers from reaching the European Union by land and sea.

Since then, hundreds of people have arrived on the Greek islands in the Aegean Sea off the Turkish coast.

Many of those who reached Lesbos, which is already struggling to cope with the number of refugees there, were transferred last week to the ship.

Last week, Greece also announced it would suspend asylum applications for a month – a move condemned by the United Nations’s refugee agency (UNHCR).

HRW, quoting a Syrian asylum seeker on board the ship, said many of the 451 people detained were women and children.

“Greece’s decision to detain more than 450 people on a naval vessel and refuse to allow them to lodge asylum claims flagrantly violates international and European law,” the New York-based rights group said in a statement.

“The action may amount to an arbitrary deprivation of liberty.”

The rights group said that the Greek authorities had denied them access to the dock area where the detainees are being held during the day, or to the vessel where they spend the night.

Bill Frelick, HRW’s director of migrant and refugee rights, said: “Greece should immediately reverse this draconian policy, properly receive these people in safe and decent conditions, and allow them to lodge asylum claims.”

The Syrian asylum seeker who contacted HRW by telephone said most of the detainees were Afghans, but that 118 were Arabs, including Syrians, Iraqis and Palestinians. Somalis, Congolese and others from Africa were also on board.

“The children are not receiving sufficient food and clothing,” he told HRW.

“We had only three toilets for 451 people until today, when they brought five portable toilets. There is no shower, no soap.”

Pregnant women were among those detained, but it was not clear if they were getting proper medical care, he added.

He also said he had been denied direct access to a lawyer.

Ankara to file case against Greece

In Lesbos, more than 18,000 refugees live in miserable conditions in and around the infamous Moria camp, which was built to hold fewer than 3,000 people. Tension has escalated on the island with the surge in arrivals last week, with residents as well as refugees and migrants staging protests.

Separately, Turkey said on Wednesday it was preparing a case in the European Court of Human Rights over Greece‘s treatment of refugees, and added the EU has so far made no concrete offer to deal with thousands trying to enter the bloc.

Turkey, which hosts approximately four million mostly Syrian refugees, fears it may be forced to admit another million following a recent escalation in fighting in northwest Syria where its forces back rebel groups against a Russian-backed government offensive.

In March 2016, Turkey and the EU agreed upon a deal in which Brussels would provide billions of euros in aid to help Ankara finance housing, schools and medical centres for the refugees it hosts on its soil.

But Ankara has repeatedly accused the bloc of not fulfilling its commitments under the deal, including visa-free travel for Turkish citizens and an enhanced customs union.