Smoke doesn’t normally concern James Harold Jones. It was the flames he saw in the barbecue pit at Jones’ Bar-B-Q Diner, his family’s restaurant in Marianna, Ark., that made him worry on Sunday morning.

“I don’t usually have no flame,” Mr. Jones said of his time-honored technique for cooking pork shoulders over low heat. “I have coals.”

The fire, which started in the two smokers, burned 70 percent of the century-old restaurant, one of the oldest continuously operated Black-owned businesses in the country. No one besides Mr. Jones was inside, and no one was injured, but alarm quickly spread across the state and beyond over the fate of a historic place that serves just one dish — pulled pork, on Wonder Bread or by the pound — in an Arkansas Delta town with a population of 4,100.

The fire was caused by grease from the pork shoulders, and spread to the roof of the smoking room at the rear of the restaurant, said the Lee County Marianna fire chief, Terry Sandefer.

Marianna’s mayor, Jimmy Williams, 71, said he went directly to Jones Bar-B-Q from church, where he first received word of the fire. “That little place has brought a lot of people to this small town,” Mr. Williams said. “I’ve met people from all over the world down there.”

On Monday morning, Mr. Jones, 76, was already meeting with local officials about his plans to rebuild. He said his two grills were not badly damaged, and that a new structure would be made of fire-resistant metal instead of wood. 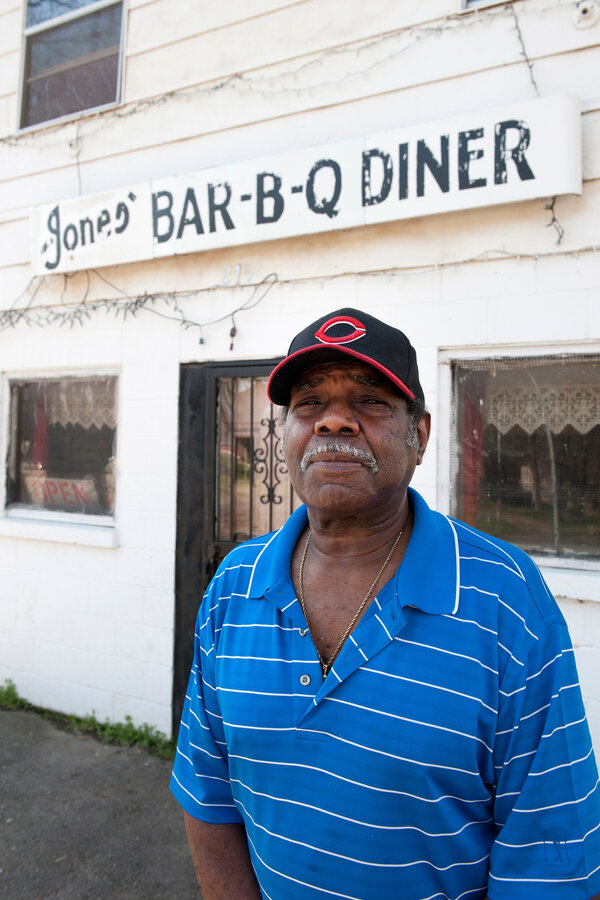 An online fund-raiser had raised more than $20,000 for the rebuilding effort by Monday afternoon, and Southern Restaurants for Racial Progress, a program started by the LEE Initiative, gave Jones’ Bar-B-Q a $25,000 emergency grant.

Rodney Scott, the James Beard award-winning chef and pitmaster from South Carolina, called Mr. Jones’s son, James Jr., to offer advice on how to rebuild a safer, wood-fire barbecue restaurant. The Scott family’s original restaurant, in Hemingway, S.C., was badly damaged by a fire in 2013, and the pit at Rodney Scott’s Whole Hog BBQ, in Charleston, suffered fire damage in 2018.

“You just got to make things more noncombustible, with metal and fire-resistant doors,” Mr. Scott said. “These are things we mom-and-pop places don’t normally think about.”

Mr. Jones, known locally as Mr. Harold, said his restaurant was started by his grandfather, Walter Jones, and that it dates to 1910. He works mostly alone at the two-table restaurant, although he has needed more seasonal and weekend help from James Jr. and his wife, Betty, since 2012, when Jones Bar-B-Q was named an America’s Classic by the James Beard Foundation.

“Once we got that award, we was nationwide,” James Jr. said.

Adrian Miller, author of the book “Black Smoke: African Americans and the United States of Barbecue,” due out next month, said the restaurant’s pulled pork in a vinegar-and-tomato based sauce is similar to the style found in western Tennessee. Marianna is about 60 miles southwest of Memphis.

The restaurant is culturally significant, Mr. Miller said, because there are fewer pitmasters who smoke their meat over live fire alone, as Mr. Jones does, and because of its longevity.

“Black entrepreneurs have always had hurdles put in their way that make it really hard for them to survive,” Mr. Miller said. “So to have this place that’s been around for over 100 years is really extraordinary.”

Mr. Jones said he has no plans to retire. James Jr., 46, a coach and teacher, said that one of his uncles will likely take over Jones’ Bar-B-Q whenever his father steps away.

Mr. Miller said the future of barbecue restaurants is often in question as they pass from one generation to the next. “A lot of times, when entrepreneurs are starting businesses, particularly barbecue, they do it so their kids can do something else,” he said. “It’s hard work.”