Earlier lockdown ‘could have saved 36,000 lives’ 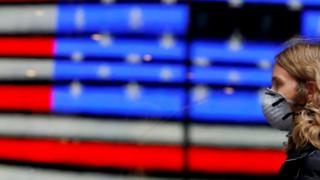 A study has estimated there may have been 36,000 fewer coronavirus-related deaths had the US entered lockdown a week earlier in March.

The Columbia University research also estimated that around 83% of deaths could have been avoided if measures had been taken two weeks earlier.

It suggested that 54,000 fewer people would have died had cities begun locking down on 1 March.

The research has not yet been peer-reviewed.

The study covers data up to 3 May, at which point there had been just over 65,300 coronavirus-related deaths in the US.

There have now been more than 93,400 coronavirus-related deaths in the United States, according to data from Johns Hopkins University.

The results of the study indicate that stricter measures imposed sooner could have made a dramatic impact.

It said the findings “underscore the importance of earlier intervention and aggressive response in controlling” the virus.

Individual states then began lockdown measures at different times, with California and New York state going into lockdown on 19 March and 22 March respectively, while Georgia became one of the last to implement such measures on 3 April.

Mr Trump has been criticised for not imposing stricter measures sooner, and for tweets which compared coronavirus to influenza.

All 50 US states are now moving towards reopening.

That includes Michigan, where governor Gretchen Whitmer is now allowing up to 10 people to gather so long as they practice social distancing and wear face masks.

On Thursday, the president is visiting a Ford plant manufacturing ventilators in Michigan, as new jobs numbers showed a further 2.4 million Americans sought unemployment benefits last week despite hopes that easing lockdowns would help the economy.

The new filings brought the total number of claims since mid-March to roughly 38.6 million – roughly a quarter of the workforce.

Mr Trump is expected to tout the surplus of ventilators as he attempts to woo voters ahead of the 2020 presidential election in the swing state of Michigan.