Donald Trump hints at US Presidential run in 2024 – ‘I might decide to beat them again!’ 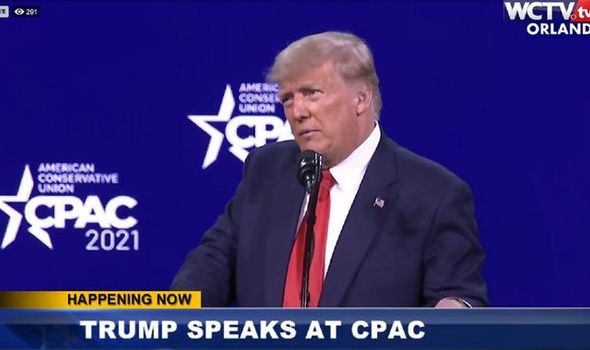 The former US President spoke at the Conservative Political Action Conference (CPAC) today where he lashed out at the Democrat who beat him in the US election back in November. In his speech, Mr Trump revealed he may stand in the 2024 election race.

He told a crowd of Trump supporters: “But who knows, I may even decide to beat them for a third time.”

Mr Trump also did not hold back and claimed the new administration has been the “most disastrous” first month in modern history.

He continued: “We all knew the Biden administration was going to be bad, but we never imagined how bad they would be and how far left they would go. He never talked about this.

“We would have those wonderful debates. He would never talked about this.

“We didn’t know what the hell he was talking about actually.

“His campaign was all lies.

“He wants to put you all out of business.

“Joe Biden has had the most disastrous first month of any President in modern history.

“Already the Biden administration has proven that they are anti-jobs, anti-family, anti-borders, anti-energy, anti-women and anti-science.

“In just one short month, we have gone from America first to America last.”

Mr Trump also ruled out starting a new political party and said the Republican party will be “stronger than ever before.

He said: “I am not starting a new party.

“We have the Republican Party.

“It’s going to unite and be stronger than ever before.”

He also accused the US President of “selling out America’s children to the teachers’ unions” and urged Mr Biden to reopen schools now.

Mr Trump said: “The mental and physical health of these young people is reaching a breaking point.”

The former President continued his attack on Mr Biden and criticised the White House for removing sanctions on Iran.

He continued his claims of a fraudulent election and said: “Had we had a fair election, we would have had a deal with Iran within the first week.”

Mr Trump claimed Mr Biden wants to go back to Afghanistan for another “endless war”.