COVID-19: Indian family rescued after confining themselves to tent for 15 months over coronavirus fears

Police in India have rescued a family after they confined themselves to a tent for nearly 15 months because they feared being infected with coronavirus.

Officers reached the family in Andhra Pradesh’s Kadali village on Wednesday, finding them close to death and in a “very pathetic” condition.

The head of the Indian village, Choppala Gurunath, said a mother and her two children locked themselves in the tent almost 15 months ago after one of their neighbours died from COVID-19. 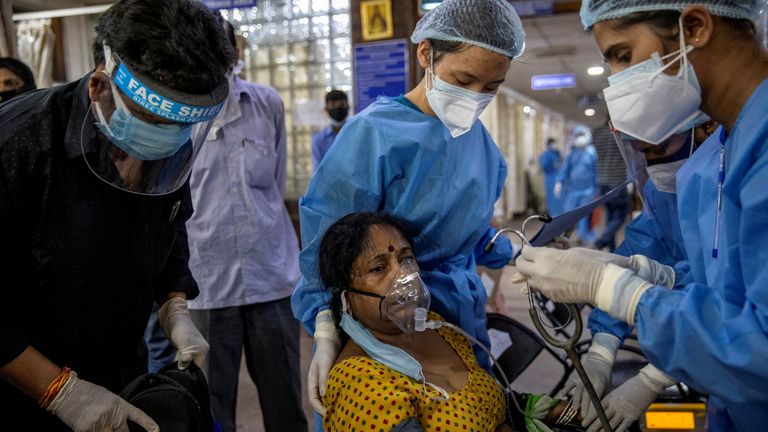 “The family of Chuttugalla Benny, his wife, and two children, have been residing here. They were afraid of corona so they locked themselves in the house for almost 15 months,” Mr Gurunath told the ANI news agency.

“Any volunteer or ASHA (Association for Social and Health Advancement) worker who went to that house used to return as nobody was responding. Recently some of their relatives informed that three people have locked themselves in that house and their health is in bad condition.”

He said he found out about the family’s situation when a volunteer went to get their thumb impression after they were allotted a housing plot under a government scheme.

“Coming to know the matter, we rushed to this place and informed the police,” he added.

“Rajole Sub Inspector Krishnamachari and the team came and rescued them. Their condition was very pathetic when they came out.

“Their hair was grown without any grooming, they did not bathe for many days. We immediately rushed them to Government Hospital. Now they are undergoing treatment at the hospital.”

He said the family would have died if they had continued isolating for two or three more days.

“Their matter came to light when our village volunteer went to their house to get their thumb impression as they were allotted a housing site. When he called them, they denied to come out by saying that they would die if they come out. The volunteer had informed us of the matter, and we rushed to this place.

“The family is staying inside the small tent, they even attended the nature calls within that small tent. We have shifted them to hospitals with the help of villagers and the police. Now they are undergoing medical treatment.”

India has suffered the second-highest coronavirus death toll after the US, with 418,987 dead and 31.26 million cases.

However, research has suggested the true death toll could be 10 times higher than the official figure, with most experts believing India’s official toll is vastly underestimated.