The number of coronavirus patients to have died in Italy is now higher than the recorded death toll in China – where the outbreak began.

The number of confirmed coronavirus deaths in China is 3,245, while Wuhan – the city where the first case emerged – reported no new infections on Thursday.

Italy’s latest figure is a slight improvement on the day before, when there were 475 deaths.

China’s population is more than twenty times larger than Italy’s and its number of recorded cases is far higher – 80,907 compared with 41,035.

However, experts believe the total number of infections in Italy is significantly higher because testing is largely limited to
those arriving for hospital care.

A nurse at a Milan hospital, Daniela Confalonieri, said: “Unfortunately we can’t contain the situation in Lombardy.

“There’s a high level of contagion and we’re not even counting the dead anymore.”

The army has been called in in Bergamo, northeast of Milan, to help deal with the number of dead.

Italy has been on total lockdown since 9 March and on Thursday it was extended until further notice, instead of ending next month.

There have been more than 227,000 suspected and confirmed coronavirus cases worldwide and more than 9,300 deaths, according to Johns Hopkins University, which is tracking the outbreak.

Experts have warned the peak of the spread of the virus there may not arrive until mid-April in the north, so far the country’s hardest hit area, and possibly later in other regions.

Health authorities have cited a variety of reasons for Italy’s high number of coronavirus deaths including its large population of elderly people. 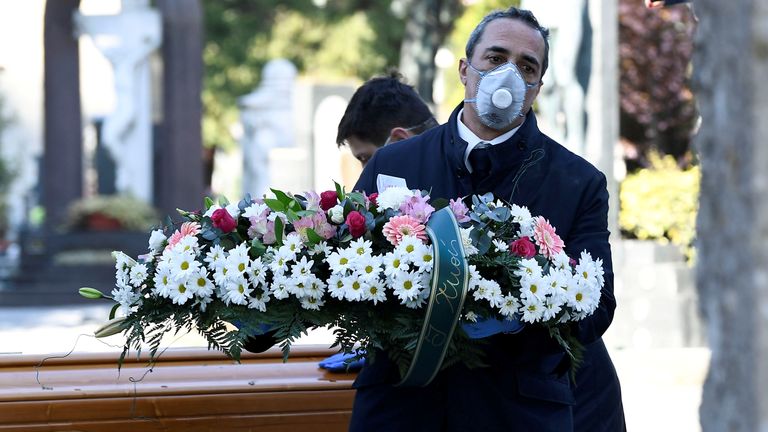 Italy has the world’s second-oldest population and the vast majority of those who have died – 87% – were over 70.

Virologist Jonas Schmidt-Chanasit said it could also be explained in part by the almost total breakdown of the health system in some areas.

“That’s what happens when the health system collapses,” he said.

During a visit to Milan, the head of a Chinese Red Cross delegation helping advise Italy said he was shocked to see so many people walking around, using public transportation and eating out.

Sun Shuopeng said Wuhan saw infections peak only after a month of a strictly enforced lockdown.

“All people should be staying at home in quarantine.”