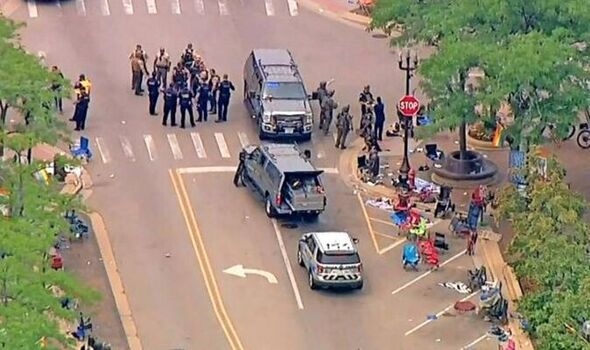 US President Joe Biden said: “Jill and I are shocked by the senseless gun violence that has yet again brought grief to an American community on this Independence Day. “I have offered the full support of the Federal government. I also surged Federal law enforcement to assist in the urgent search for the shooter. “

“I will monitor closely as we learn about those whose lives have been lost and pray for those who are in the hospital. I’m not going to give up fighting the epidemic of gun violence.”

Witnesses described seeing children being shot by a man said to be white, aged around 18 to 20 with “long back hair”.

He is believed to have fired from the roof of an outdoor outfitting store, picking off people in the crowd who had initially confused the gunshots with the parade’s fireworks.

Zoe, who would only give her first name, said: “Everyone started running. I looked back [and] probably 20 feet away, I saw a girl shot and killed. I’ve never seen anything like this.”

Police said they recovered a rifle at the scene but witnesses described multiple rounds being fired in quick succession, which would suggest a semi-automatic weapon was used.

The event was suddenly halted just 15 minutes after it began at around 10.15am, when several shots were heard. Witness Miles Zaremski said he heard up to 30 gunshots, in two consecutive spurts of gunfire.

He added: “I heard 20 to 25 shots, which were in rapid succession. So it couldn’t have been just a handgun or a shotgun.”

The hail of bullets caused a stampede of people, which was captured on video.

Debbie Glickman said she was on a parade float with co-workers and they were about to turn onto the main route when she saw people fleeing the area. She said: “People started saying ‘there’s a shooter, there’s a shooter.’ So we just ran.”

Highland Park mayor Nancy Rotering said: “On a day when we came together to celebrate community and freedom, we are instead mourning the tragic loss of life and struggling with the terror that was brought upon us.”

Illinois congressman Brad Schneider, who was at the event, tweeted: “Hearing of loss of life and others injured.”

“My condolences to loved ones, my prayers for the injured and for my community and my commitment to do everything I can to make our children, our towns, our nation safer. Enough is enough!”

Nearby suburbs Deerfield and Evanston cancelled their parades in the wake of the attack.

The shooting is the latest in a recent spate of attacks that have left dozens dead. But many US politicians are still resisting bringing about meaningful laws designed to prevent such attacks.