Dozens of parliamentarians joined the fistfight, some climbing over desks to throw punches. 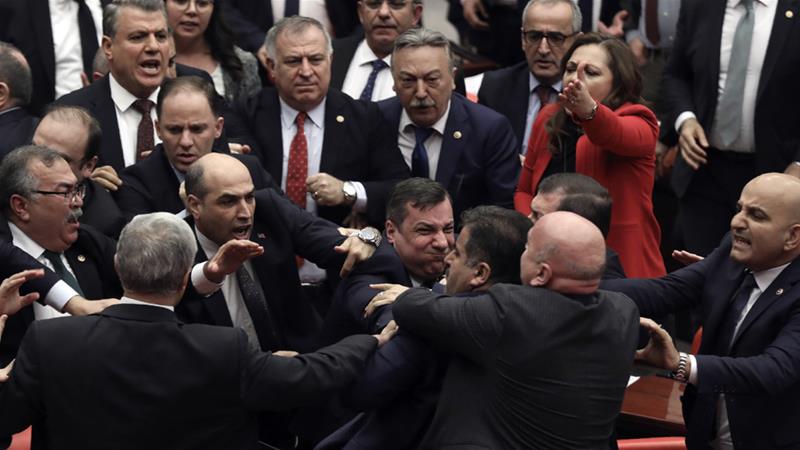 A fistfight erupted in the Turkish parliament on Wednesday during a speech by an opposition legislator who earlier accused President Recep Tayyip Erdogan of disrespecting Turkish soldiers who died in Syria.

Dozens of parliamentarians joined the brawl, some climbing on top of desks to throw punches, while others tried to stop the fighting, according to video footage of the brouhaha.

Some legislators fell to the ground during the fray, Turkey’s Haberturk television reported.

Engin Ozkoc, a legislator from the opposition Republican People’s Party (CHP), accused the president at a news conference and later in tweets of disrespecting soldiers killed last week in Syria’s Idlib region.

At least 59 Turkish soldiers have been killed in Idlib since Turkey began its military campaign in Syria’s last rebel bastion, where a Russia-backed government offensive has forced nearly one million people to flee towards the shut Turkish border in search of safety.

Turkey has sought to push back Syrian forces behind lines agreed under a 2018 deal with Russia, which established 12 Turkish observation posts and created a de-escalation zone around the province, which is home to more than three million people.

On Thursday, Erdogan will try to reach a deal on a ceasefire over Idlib when he meets his Russian counterpart, Vladimir Putin, in Moscow.