BBC meteorologist Carol Kirkwood warned viewers that for many of us, the day will start on a “cold note” with “some frost around”. The weather presenter also noted for Scotland and Northern Ireland, it will cloud over, the wind will strengthen and we’ll see some rain. However, for England and for Wales, after a frosty start for some, we’re looking at some sunshine.

“What we’ve got is a ridge of high pressure across us, but also a set of weather fronts coming our way from the Atlantic.

“They are what will introduce thicker cloud, then this rain.

“Some snow in the mountaintops with strengthening winds.” 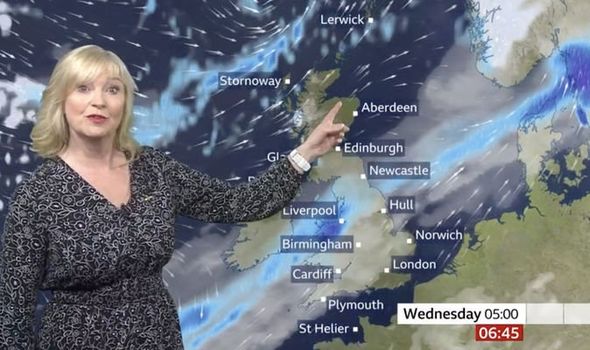 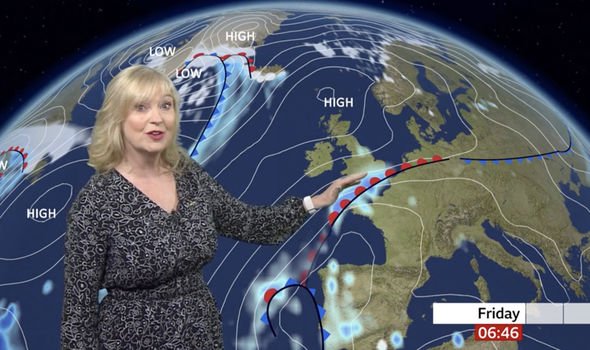 She continued: “This morning there’s some cloud crossing England – that will break up through the course of the morning and then it will be a fine day.

“Temperatures 10C to 13C across England and also Wales.

“Scotland and Northern Ireland, you’ve got between 6C to 10C.

“Through this evening and overnight, the weather fronts producing this rain sink southwards.” 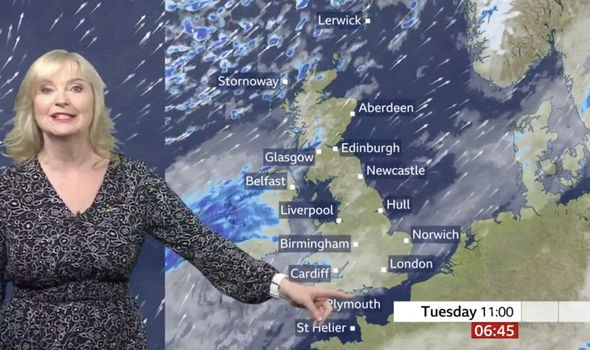 The BBC presenter added: “And as the rain bumps into the high pressure, it will start to weaken.

“That band will be mostly cloud with patchy rain across Wales, southwest England, not getting down into the far southeast.

“We’re under clear skies, it will be a cool night.” 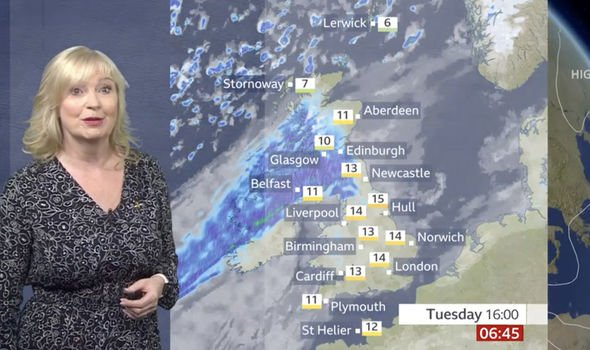 Ms Kirkwood also told viewers: “Behind that band, we’re still looking at some showers, but equally some clear skies as well.

“So we start tomorrow, for England and Wales, on a cloudy note, the cloud building in the south east through the day.

“There’ll be one or two spots of patchy rain but the heavier rain returns across Northern Ireland through northern England, especially Cumbria, and into Scotland.

“Once again, we’ll see some snow on the tops of the Scottish mountains.

“Temperatures will be about 6C to 14C, with London at 14, above average for this time of year.”