The BBC Weather forecaster warned gusts of up to 60mph will batter some parts of the country today as a new front brings heavy showers from the west. Carol Kirkwood also warned temperatures are expected to plummet from Tuesday, with some areas bracing for a 3C start to the day. She said: “We have seen a lot of rain particularly so across the North of England but not exclusively.

“It’s also been a windy night, the wind will continue as we go through the course of the day, especially in the south and the west.

“And it is going to turn cooler through the day as well.

“To give you an idea of temperatures at the moment, it is cool in Edinburgh and Belfast and Cardiff. But look at London, Bedford and Cromer, at the moment it is 18C.

“That is ahead of this weather front which is bringing some rain. As it pushes away, cooler air will follow behind. We have another front coming in through the west, which will enhance the showers. 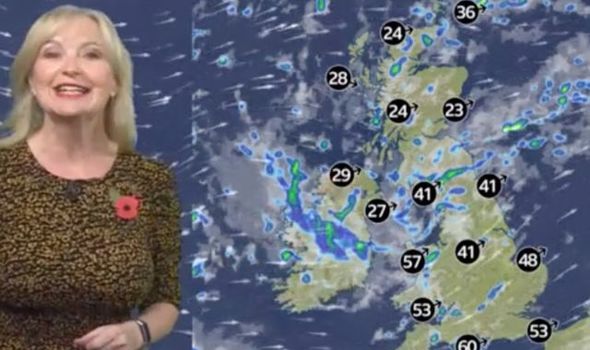 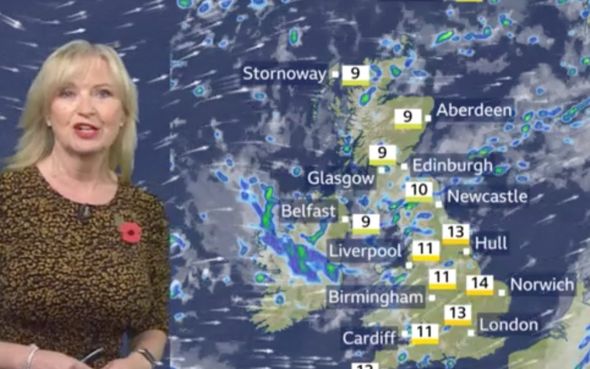 “And it is still going to be gusting about 40, 45 miles per hour across southern areas inland, more than that with exposure.

“That will continue through the day.”

Temperatures on Monday could plummet to just 8C in some parts of Southern England on Monday evening and could be as low as 4C in areas of Scotland.

This sweeping cold snap will continue throughout Tuesday, with darker blue spots covering the UK map as the mercury continues to plummet.

Britons in the south of the country could wake up to temperatures of just 6C, and worse still, just 3C in some parts of Scotland.

While it will get slightly warmer as the day progress, the cold snap is forecast to return by early evening.

Wednesday will experience much of the same before a warmer front sweeps in from the Atlantic in the early hours of Thursday to bring some hope of warmer weather for Britons heading into next weekend.

BBC Weather warned the UK will continue to be hit by wet and windy conditions on Monday before temperatures fall on Tuesday followed by a “chilly” evening later that evening.

The forecast said: “Remaining unsettled on Monday with further spells of rain and windy weather, but there should be some sunshine for many areas in the afternoon. 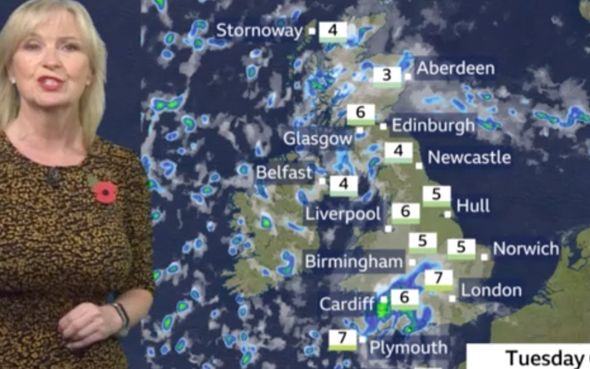 “A cooler day on Tuesday, with further showers blowing into western areas.

“Chilly on Tuesday night under some clear skies.”

Netweather warned following a stormy beginning to next month, it will quickly become colder by midweek.

Parts of the country will also likely be hit by frost and patchy fog that could linger in the air on some mornings.