BBC Weather: ‘Beautiful’ early mornings will not remain as thunder and hail to batter UK

Carol Kirkwood presented the weather from the London Eye and looked out across the capital which was lit up by clear skies and a beautiful sunrise. However, the forecaster warned BBC Breakfast the calm and clear morning starts were not here to stay as the UK can expect heavy rain and even thunder in some regions. Showers and hail are also expected across the country but especially in the east.

Speaking on BBC Breakfast, Ms Kirkwood told the programme: “For many of us it is a beautiful start to the day, there are a few showers around but through the day further showers will develop.

“What’s happening is we’ve got a weather front coming in across the southwest, that’s going to introduce some heavy and thundery showers with some hail.

“And we’ve got another weather front which is sinking south across the far north of Scotland, that will bring in cloud and some further patchy rain.” 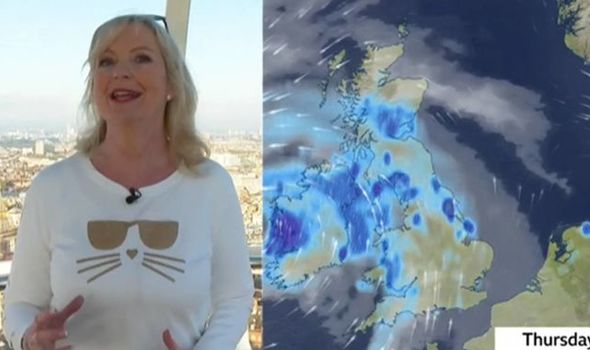 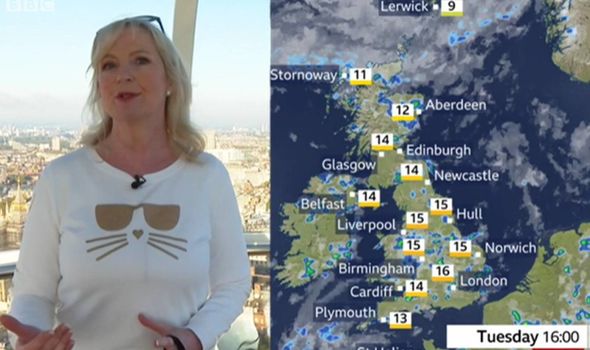 Ms Kirkwood continued: “In between, we’re starting off on a not particularly cold note there is some sunshine around but just watch those showers develop as we go through the day.

“Particularly coming in across the southwest.

“Now there will still be some showers across northern England in southern Scotland but will be fewer and further between and farther south.

“There will be a temperature range of roughly nine to about 15 degrees. 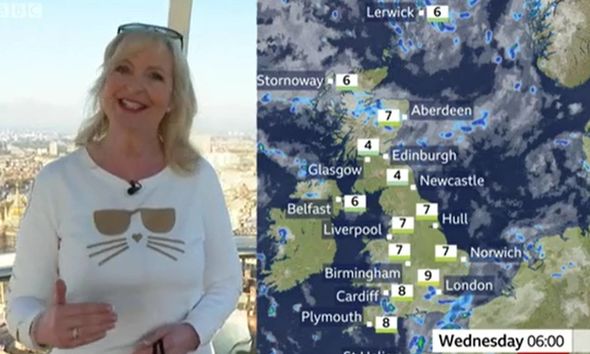 “Through [Tuesday] evening and overnight eventually many of the showers will fade but the feature in the southwest is going to scoot across southern counties bringing some further showery rain.”

Ms Kirkwood then added: “And the feature across northern Scotland sinking south bringing again cloud and some patchy rain.

“Temperatures above freezing but locally in northern England, southern Scotland and Northern Ireland will be close to freezing.

“So for Wednesday, the rain across Scotland will turn more patchy and we’ll see sunshine and showers coming in behind it. 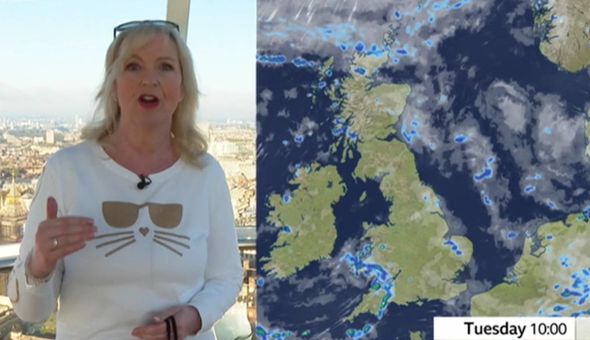 “Once again, the weather front in the south clears away and we’ll see further showers develop particularly in the east where they’re likely to be heavy and sundry once again with some hail.

“Then it changes as we go through the [Wednesday] overnight period as an area of low pressure comes our way.

“And you can see on Thursday we’ve got all this rain sweeping in from the west across most areas during the day and accompanying that will be strengthening winds.

“That will be with us on Friday before it clears away and some of us will actually have some gales.