BERLIN (Reuters) – The premier of the southern state of Bavaria, Markus Soeder, is Germany’s most popular politician, a poll showed on Friday, boosting his chances of standing as the conservative chancellor candidate in the next election and succeeding Angela Merkel. 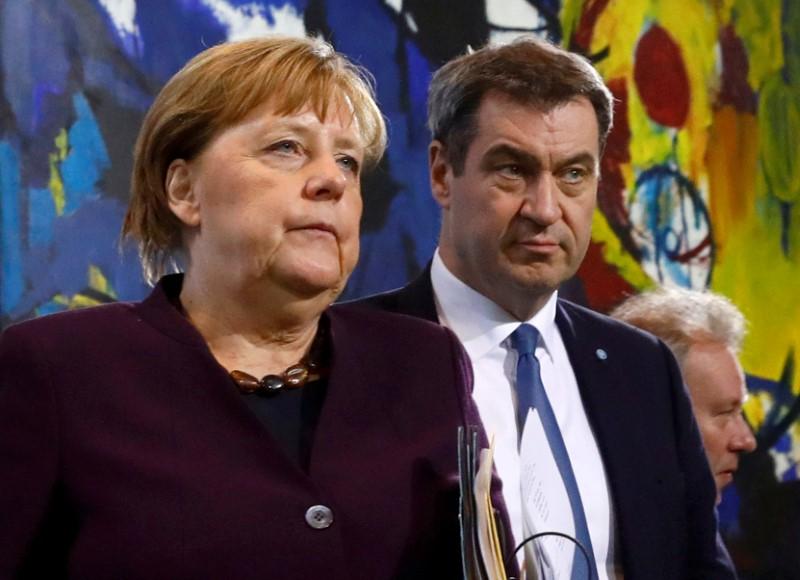 During the coronavirus crisis, which has hit Bavaria particularly hard, Soeder has impressed commentators by introducing tough steps to restrict social contact before the rest of Germany while displaying a calm and reassuring air.

The INSA poll for Focus magazine put Soeder, head of Bavaria’s conservative CSU, on 129 points, up 11 from a week ago and overtaking Merkel who came second on 126 points, making him Germany’s most popular politician for the first time.

After almost 15 years leading Europe’s biggest economy, Merkel has said she will not seek a fifth term and her conservative CDU party is in the midst of a leadership race after her protege said last month she would stand down.

The winner is in a strong position to run as German chancellor in a federal election due by October 2021. Bavaria’s CSU must agree, however, as the two parties form a parliamentary bloc, and despite protestations that he is happy as state premier, Soeder may decide to stand himself.

Germany has recorded 10,999 cases of the coronavirus and 20 deaths. Bavaria, which had Germany’s first cases, now has 1,692 cases and eight people there have died. Soeder has led the way with school closures and other social distancing steps and has called a state of emergency in Bavaria.

One commentator in top-selling Bild this week said Soeder was his hero. “In this war against the virus I want you to be field marshal,” he wrote.

In part hamstrung by Germany’s federal system, which gives a lot of power to the 16 states, Merkel has at times appeared dry and more hesitant. Only on Wednesday evening did she address the public about the crisis in a rare television address.

A separate poll for Focus, conducted by Kantar, showed that among conservatives, Soeder was the most popular choice to run for chancellor, scoring 30% compared to 22% each for CDU candidates Friedrich Merz and Armin Laschet.

It is unclear when the leader will be chosen as the CDU has postponed a conference to decide from April 25.