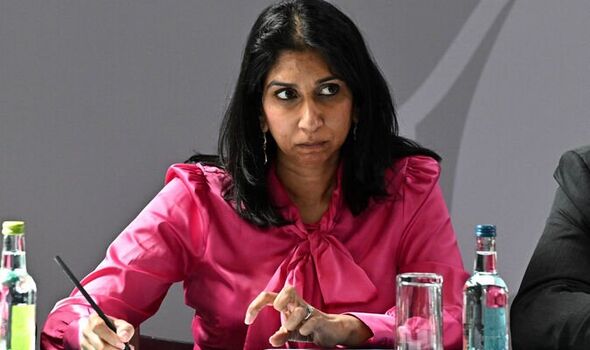 Last month 98-year-old former US Secretary of State Henry Kissinger triggered uproar when he pushed for negotiations to begin within the next two months and pressed for a “return to the status quo ante” – widely seen as a restoration of Ukraine’s borders before the February invasion. Vladimir Putin’s forces seized Crimea in 2014, and Ukraine has fought Kremlin-supported separatists who control territory in the eastern Donbas territory for eight years.

Writing in the Sunday Express, the Attorney General slaps down Mr Kissinger’s proposals, saying: “Today as Russia’s illegal war grinds on, some are calling for Ukraine to give away some of their country in order to appease Russia. People like Henry Kissinger believe that if we give the Russian dictator some of what he wants, he’ll stop the war and we can return to normal.

“We shouldn’t be putting pressure on the Ukrainian people to give away territory, especially whilst they are giving their lives to defend it. Now is not the time to give up on sovereignty.”

Ms Braverman warned that failure to stand up to Russia over Ukraine could have consequences for Taiwan, which China considers part of its territory.

She said: “Some say we are not looking at the big picture. That if we put pressure on the Ukrainian people to negotiate peace with Russia, it can end bloodshed and we can lift our sanctions.

“But the big picture should also include places like Taiwan. We know the island is vulnerable to invasion and hostile states are looking carefully at the Ukraine war to see how the West responds.”

The Attorney General stresses her determination to bring war criminals to justice, adding: “It is only by standing shoulder to shoulder with Ukraine that we can deter further barbaric acts.”

The UK has joined the US and the EU in supporting Ukrainian Prosecutor General Iryna Venediktova to hunt down and prosecute those responsible for atrocities.

Ms Braverman insists that sanctions are “seriously damaging Vladimir Putin’s ability to wage war,” saying: “Currently around £275billion – 60% of Russian foreign currency reserves are frozen and Russia is on track for a deeper recession than the 2008 global financial crisis.”

And she warned that cyberattacks by Russia would be met with retaliation.

“Warfare isn’t just happening on the ground, it is also taking place in cyberspace – but there are clear legal ways the UK can retaliate against rogue states,” she said.

“If the UK is struck by hostile cyber activity which is not strictly unlawful, the UK and our allies are able to fight back in ways that can include things like asset freezes and economic sanctions.”

She concluded: “We have a clear message to those who invade sovereign states, commit war crimes, and launch crippling cyber attacks; your actions will have consequences and the UK will stand firmly behind Ukraine and anyone else who you try to threaten.”