A PR show of EU unity to the wider, doubting world 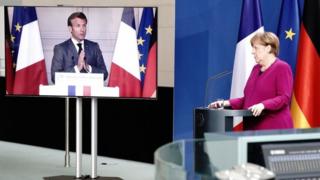 After a shambolic, acrimonious display at the start of the Covid-19 pandemic, the EU’s main players are now on a mission to demonstrate that the European dream is not dead or dying. To prove that solidarity, common values and a unity of purpose are, in fact, the order of the day.

Before this the European Commission’s voice seemed weak and lonely as it tried to co-ordinate member states which were prioritising their own health and economic crises at home.

The German and French leaders were notably absent: the relationship between them tetchy – with France pushing for the EU’s richer countries (including Germany and excluding itself) to take on and share the coronavirus-related debt of the countries of the south.

But what did we see on Monday? Hey presto: German Chancellor Angela Merkel and French President Emmanuel Macron jointly proposing a recovery fund help the weakest EU economies get out of a post-covid slump to the tune of €500bn ($545bn; £448bn).

In EU political terms this is huge. Chancellor Merkel has conceded a lot. She openly agreed with the French that any money from this fund, allocated to a needy EU country should be a grant, not a loan. Importantly this means not increasing the debts of economies already weak before the pandemic and financially excruciating lockdown, such as those in southern but also central and eastern Europe.

President Macron gave ground too. He’d wanted a huge fund of a trillion or more euros. But a trillion euros of grants was probably too much for Mrs Merkel to swallow on behalf of fellow German taxpayers.

The resulting compromise: win win for the two leaders. They hope.

They got to demonstrate that the famed Franco-German motor of Europe still has some va va voom in it. Mr Macron badly needs to polish his European credentials at home. He already has an eye on his re-election bid and so far the self-styled Mr Europe’s attempts at European reform have failed rather spectacularly to take off.

Chancellor Merkel meanwhile is in her last term of office. She’s clocked the headlines predicting the EU’s demise in view of the bickering and lack of EU solidarity at times during the pandemic. She has her political legacy in mind and the European mantel is of huge importance to her.

And guess what? The form the French and Germans suggest for this recovery fund – with money for grants to be raised on the capital markets on the back of guarantees from EU governments as part of the bloc’s budget – dovetails nicely with the proposal to be unveiled by the European Commission next week.

Coincidence? Hardly. This is tough sell time by the EU’s biggest powers. A PR show of EU unity to the wider, doubting world. And a concerted internal marketing drive on the recovery fund to the disparate member states with their often contradictory demands.

Sure enough, hot on the heels of the Franco-German Recovery Fund announcement, Italy’s prime minister popped up on Twitter, dousing the idea with faint praise. Giuseppe Conte said the proposal was an “important first step”. He of course would prefer a fund stretching to a trillion, or trillion-and-a-half euros.

At the other end of the spectrum, you can expect the Dutch, the Finns, the Austrians and others dubbed “the frugal north” to have something (pretty negative) to say about grants v loans.

The European Commission hopes to persuade them with the argument that the fund is an exercise in common self-interest. An investment in the single market shared by all member states. Brussels warns the whole eurozone could be destabilised if there is an uneven economic recovery after the pandemic. Remember the oft-repeated presumed true-ism that Italy is too big to fail?

Doubting EU governments ultimately need to sell the idea of the recovery fund to their voters and national parliaments. The decision will have to be a unanimous one.

As a sweetener, Commission sources say they’ll propose that countries wanting grants should be free to come forward with their own national recovery proposals and that there will be no restrictions on which sectors can apply for help (aviation, tourism etc) but funds will only be allocated if money is spent modernising an economy, such as by improving digitalisation, or spent on EU priorities, such as clean technologies.

The Commission says it’s confident this will strengthen the whole internal market and provide another win-win situation.

I’d say the battle over the EU recovery fund is only just beginning.