Every year, I look forward to Thanksgiving as an opportunity to eat bread by the spoonful. That’s all stuffing is: bread, which is already delicious, made more perfect by being ripped into bite-size bits, tossed with seasonings and mix-ins, and baked until crisp on the outside but still squishy and soft on the inside. It’s forkable, ideal for sopping and ready to play nice with whatever else is on the plate.

I grew up in a Stove Top household, but fancied up, with milk swapped in for water, and seared giblets and sautéed vegetables added to the stuffing mix. It would appear once a year alongside all the classics: jellied cranberry sauce from the can, sliced thick along every other ridge; creamy green bean casserole topped with French’s fried onions; and a basket of doughy Pillsbury crescent rolls.

Over time, we’ve moved away from the traditional Thanksgiving spread, sometimes opting for roast duck instead of turkey, and losing the canned sauce for fresh cranberry-pomegranate relish. But I still love a casserole dish filled with stuffing; nothing else hits me with all the nostalgia of those cream-of-something soup years.

I also believe that stuffing is the pinnacle of Thanksgiving leftovers. Not only can you make stuffing with any bread, mix-ins and seasonings, it’s also a chameleon of an ingredient, ready to take any form you want to give it — quite literally. I’m enamored by how I can smash and squash stuffing, bend it to my will, to make something totally new. Show me a roast turkey that can do that! 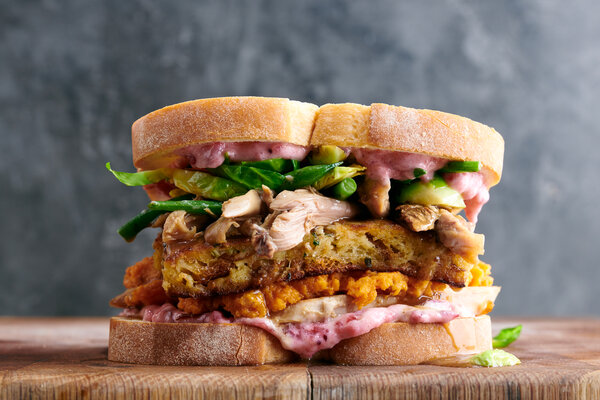 Anywhere you might find bread, stuffing can step in and step it up, bringing with it a certain holiday flair. For my Thanksgiving leftovers turkey club, I press the stuffing into a big slab as thick as a slice of bread before cutting it into squares and griddling until seared and toasty. Each square then replaces the middle slice of bread in my turkey club, a distinctive divider for the rest of the sandwich layers. Everyone knows the sandwich you make the day after Thanksgiving is the best part of the holiday, and now it may be the best sandwich you eat all year.

This pressed-and-fried technique is useful beyond sandwiches. I also like to squeeze stuffing into a loaf pan, so it’s dense and thick, before chilling and cutting it into chunky cubes. I’ll fry the cubes until they are crackly and golden on the outside and tender and custardy on the inside. These delicate yet rich stuffing pieces top a salad of mixed greens and shaved crunchy vegetables that’s dressed with cranberry vinaigrette. It’s hot and cold, creamy and crisp, and a way to eat holiday food while technically also having a salad.

Anything bread can do, stuffing can do better, and this is especially true of dumpling soup. I mash leftover stuffing with a splash of turkey stock until all the big nuggets are broken up. Then I’ll stir in eggs, flour and baking powder to make a dumpling dough. I’ll simmer a simple bone broth with the turkey carcass — another hero of Thanksgiving leftovers — and then load up the soup with kale and sweet potato before dropping in dollops of the stuffing dumpling mix. The dumplings soak up the broth, growing plump and tender, while also adding body to the soup. Because the stuffing is already packed with flavor, the dumplings are too, without any extra help from you.

Regardless of what your holiday plans are, whether you’re cooking for only a few people or skipping the turkey altogether, go ahead and make all the stuffing. I will be making a family-size casserole for my teeny pod of two because I am here for the leftovers. I’ll be playing with my food, transforming stuffing into something new, and I hope you will be too.

Turkey sandwiches with cranberry? Salad with stuffing croutons? Soup? Regardless of how you decide to eat your leftovers, your best choice for wine is to finish whichever bottles were left over from the holiday feast. Just as you are efficiently creating dishes that may be even more satisfying than the original meal, why not be as economical with the wine? Whether Beaujolais, Oregon chardonnay or any bottles you were creative enough to open the night before, enjoy them in the same spirit of relief and joy that comes with a successful meal and the realization that you don’t have to do it again for an entire year. You drank all the wine last night? Then reward yourself with the beer or cider of your choice. ERIC ASIMOV