Last summer, Cat Rainwater was overweight and going through menopause at an accelerated clip. That, on top of the stresses of pandemic lockdown, was leading to a mental health crisis.

“I was suicidal,” said Ms. Rainwater, 49, a mortgage underwriter based in Austin, Texas. “My sister was taking care of me and she said, ‘We have got to get you active.’”

She started trail running, until she injured her knee.

“Meanwhile, all of these mountain bikers were just whizzing past me,” Ms. Rainwater said. “I found the bike community and it’s been love since then.”

She connected with Austin’s mountain bike community via Facebook, and started meeting up for weekly group rides. She was struck by how welcoming other bikers were, regardless of age or skill level. The more she rode, the better she felt.

“I mean it when I say that mountain biking saved my life,” said Ms. Rainwater, who is planning a trip to Bentonville, Ark., with new mountain biking friends for later this year. “I hadn’t ridden a bicycle since I was a little kid, but there’s something about getting on the trails. I feel like I’m 13 again.”

Ms. Rainwater is far from alone in her desire to seek respite from the pains of 2020 in the great outdoors — national parks saw record admissions numbers, surfers took to frigid lakes in search of waves and e-biking has skyrocketed. But for mountain biking, which already experienced a meteoric rise of interest in the last decade, thanks to improved bike technology, an increased trail infrastructure and growing interest as a high-school sport, the pandemic added fuel to an already growing fire.

“When people felt unsafe around other people, they figured out that they could go into the woods,” said J.J. Jameson, a senior instructor and mountain bike guide for the outdoor outfitter R.E.I based in New York City. “Of course, that meant that everybody ran out of bikes.”

Mr. Jameson said that R.E.I.’s mountain bike sales were three times higher in the summer of 2020 than that same period in 2019 (currently, sales are up one and a half times over 2020 numbers). The surging demand in 2020, coupled with supply chain issues caused by the pandemic, led to a run on bikes (and a subsequent bike shortage) that has continued into 2021.

When mountain biking, riders can get out into nature and away from crowds. It’s an activity that appeals to all ages and skill levels, a boon for parents looking to engage homebound children. And you don’t have to be an adrenaline junkie to get into or enjoy mountain biking, though that certainly can be a part of it, if that’s what you’re into.

“Here’s how I break it down: do you want to pedal, or not?” said David Wiens, the executive director of IMBA, the International Mountain Biking Association. Mountain biking can include riding on flat trails through the woods or along a beach; it can center on lift-assisted rides at repurposed ski resorts; it can involve pedaling hard uphill on fire roads and cruising back down; it can be urban bike parks and trails; it can be “bike-packing,” or long-distance, multi-day rides with camping gear strapped to your back or bike. More types of rides have led to more types of riders.

“The diversity of riders has really changed. It used to be, straight up, a lot of white guys. Now, I’m seeing more Spanish-speaking riders, more women,” Mr. Jameson said.

A (Brief) History Of Mountain Biking

Mountain biking originated in the hills of Marin County, Calif.

“Back in the mid-70s, there was this group that were taking old, 1950s beach cruisers and putting motorcycle parts on them,” said Eric Bjorling, the brand director of Trek Bikes, a bike manufacturer and distributor based in Waterloo, Wis. “They were too heavy to ride uphill. They’d push them up Mount Tamalpais and race them down.”

Those early tinkerers began designing and building bikes specifically for bombing down hills and riding off-road, leading to the development of a dedicated industry and a surge in interest in mountain biking in the late 1980s and early 1990s. Mountain biking’s more recent resurgence is largely attributed to its development as a coed high school team sport across the country, through NICA, the National Interscholastic Cycling Association, which launched in 2009. It’s not just that there are more riders than there were before; there are more riders keen to stick with the sport for years (and they’re bringing their parents and siblings with them).

All Kinds of Ways, and Places, to Ride

Another reason for mountain biking’s growing appeal is the sheer breadth of places to ride, and types of experiences you can have as a rider.

“I think a common pitfall for people looking to get into mountain biking is the way the sport is portrayed in the media,” said Dan Meyer, the deputy editor of the nonprofit Adventure Cycling Association’s magazine. “You’ll see people screaming down a mountain, hitting huge jumps and doing tricks. Now, that’s a certain part of mountain biking. But a lot of it is about getting out in the woods, enjoying nature, exploring new skills.”

The “screaming down a mountain” variety often relates to lift- or shuttle-assisted mountain biking, which has become increasingly popular at ski resorts in summer months. Whistler Blackcomb, in British Columbia, was one of the first ski resorts to build out bike-friendly chairlifts, shuttles, bike shops and more to increase its off-season business. It did this so successfully that other ski mountains in North America followed suit. Increasingly, these spots have expanded their offerings to appeal to beginners, with cycling-specific bunny slopes for new riders.

Aside from more trails at ski resorts, the IMBA, which focuses on trail development around the United States, estimates that in 2020 more than 2,000 miles of new trails were constructed by local organizations, land trusts, state land managers and more.

The nonprofit has also made developing trails for beginner and intermediate riders a priority over the last decade.

“You can scratch a line in the dirt down a mountain and expert riders will love it. But when trails are all difficult, that’s not a fun experience for a beginning rider,” Mr. Wiens of IMBA said.

Laura Sowers and her wife, Ali Johnstone, started mountain biking in large part because of the Baileys Trail System, a new trail system where they live in Athens, Ohio. Located on National Forest land, Baileys has 26 miles (13 trails) currently open and will ultimately offer bikers 88 miles of mountain biking paths. When she picked up biking last year, Ms. Sowers, 36, was so taken with the sport and with the opportunities for growth around it, that she bought seven acres of land near the trails with the plan of developing rental properties for visiting riders.

“We’re an incredibly impoverished county within Ohio,” Ms. Sowers said. “When this trail system is finished, it will be the longest east of the Mississippi. It’s a chance to bring tourism dollars to rural Appalachia.” 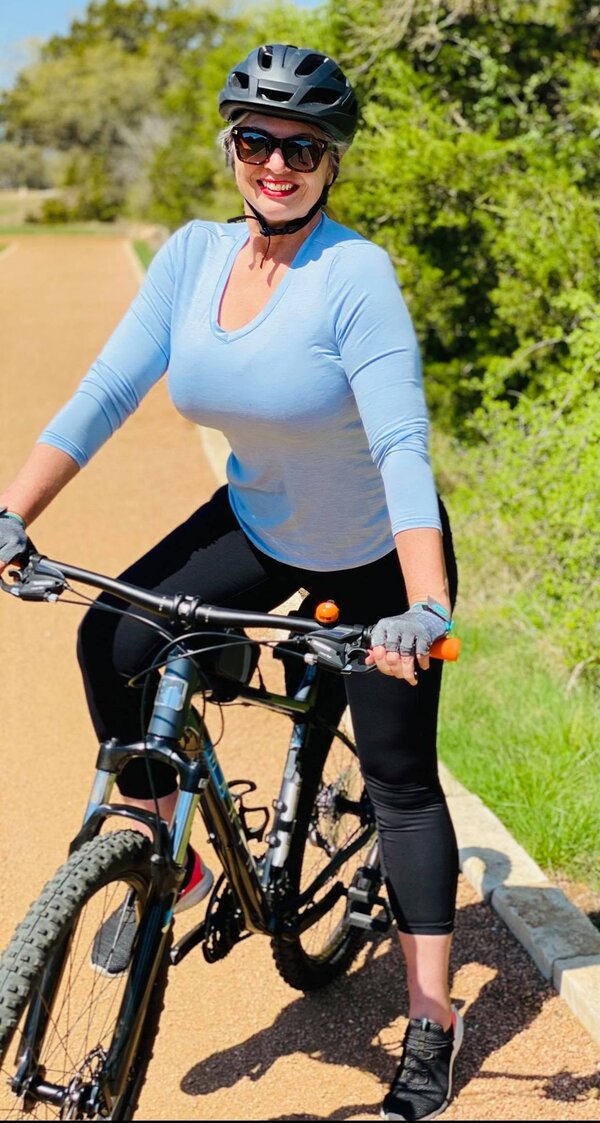 How to Get Started

Having fun and staying safe seem to be the two core principles for mountain bikers. Picking a good trail, finding a riding group or buddy and outfitting yourself with the right gear are all a part of that.

Bikes range greatly in both features and price. At R.E.I., mountain bikes run from $600 to more than $5,000. The right bike can be dependent on your budget, the types of rides you are after and whether or not you are interested in an electric bike.

In recent years, developments in mountain bike technology have led to increased safety and comfort across all price points — from frame design and shock absorption to tubeless wheels (less likely to cause flats) and “dropper posts” (seats that retract and expand with the push of a button).

Beyond the bike, a good helmet is a must. Gloves will prevent cuts and scrapes during a low-key tumble and eye protection is important for avoiding flying debris. Cushioned bike shorts can be a lifesaver on longer rides.

It’s worth noting that, while manufacturers are coming back from last year’s shortage, supply is still limited, especially for lower-priced bikes and e-bikes.

“The best thing to do is go into your local bike shop, or connect with them on the phone or online, and ask them questions.” said Sam Benedict, who oversees product and marketing for mountain bikes at Specialized Bicycles, a bike manufacturer in Morgan Hill, Calif. “They’ll be able to ask the right questions — is this your first mountain bike or your hundredth? — and direct you to the right place.”

Bike shops are also good places to connect with your local riding community, find trail recommendation and discover organized groups or classes. IMBA and local trail associations are also good resources, as is the mobile app Trailforks. Many local communities have Facebook groups. Riding with others can be safer and more fun.

And there’s no need to dive in headfirst. Hannah Finchamp, a member of the 2020 U.S. Olympic mountain biking team, recommends starting slow and working up to more challenging trails.

“You don’t want to spend your whole ride afraid! Start with the fire roads and smoother trails; you can increase the difficulty as you feel comfortable.”

Finding places to ride near where you live is a good way to get into mountain biking. But once you’ve gotten a taste, it’s a great reason to travel. Moab, Utah, Crested Butte, Colo., and Whistler, Canada are beloved, highly-trafficked destinations for riders in North America. And where mountain bikers go, development follows — top biking destinations now have microbreweries, restaurants, hotels and, of course, bike shops for rentals and repairs.

“This year will be busier than normal, but it’s not going to affect the experience that much,” said Jared Fischer, the owner of Las Vegas Cyclery and Moab Cyclery and the founder of bike-tour company Escape Adventures. He predicts that national parks will be particularly slammed but “America is big enough to provide space for everyone.”

Here are some places for exploring the United States by mountain bike.

For Urban Biking and Beyond

Bentonville has embraced mountain biking as a major tourism draw, declaring itself “the mountain bike capital of the world” and offering hundreds of miles of trails through Northwest Arkansas. Oz Trails, which was founded in 2016, has information on the region’s trails plus tips for trip planning. In Bentonville proper, experience urban mountain biking on the Slaughter Pen Trails, or get the backcountry experience without the drive at the Coler Mountain Bike Preserve, a dedicated mountain bike preserve two miles west of downtown Bentonville.

Whistler was one of the first ski resorts to build out biking infrastructure to increase their off-season business, but now they are far from alone. Mammoth in California’s Eastern Sierras, Aspen and Snowmass in Colorado, Timberline Creek in Oregon and Mountain Creek in New Jersey have all become mountain biking destinations. Spider Mountain in Burnet, Texas, adopted the ski-resort infrastructure when it opened in 2019, became the first lift-serviced, year-round bike park in the United States.

Utah is described in reverential terms among mountain-bike enthusiasts thanks to an extensive network of trails and the jaw-dropping scenery of Moab. Try your hand at bikepacking at the Aquarius Trail Hut System, a 190-mile route that was completed last fall and passes by Bryce Canyon National Park and through Red Canyon and Dixie National Forest. The route has five solar-powered huts that sleep up to 12 people and offer fire pits, stocked kitchens, showers and charging set-ups for electric bikes. Pricing depends on the amount of time you’d like to spend on the trail, the size of your group and if you’d like your trip to be self-guided or accompanied.