Man shares ‘unforgettable’ drive from UK to Mongolia – ‘if it was a bad idea, we did it!’ 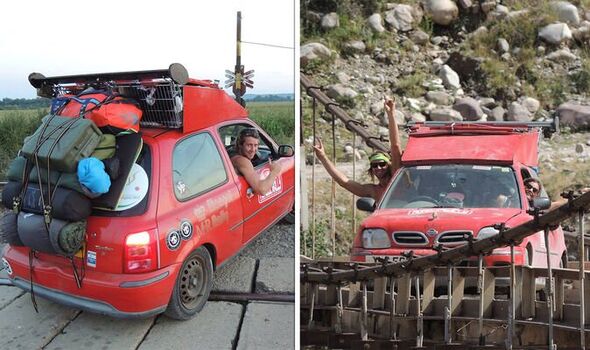 The Adventurists is a company located in Bristol which calls itself “the planet’s greatest purveyor of chaos and adventure”. What was once a one-man team is now an organisation of over 500 people working on a variety of challenges for budding travellers from all over the world. One of these is The Mongol Rally. “This is 10,000 miles of chaos across mountain, deserts and steppe on roads ranging from bad to not-a-road in a tiny 1000cc car you bought from a scrapyard for £4.60,” The Adventurists said of the road trip. It added: “There’s no backup. There’s no set route. There’s no guarantee you’ll make it to the end. It’s just you, your rolling turd and planet-earth sized bucket of adventure.” So, what kind of adventures await on one of the greatest road trips in the world?

Hayden Lockhart, 34, described The Mongol Rally as “a mixture of pure freedom and adventure”.

He came away from the trip with “endless stories”, friends for life, and, perhaps most importantly, a wife.

Born and bred in New Plymouth, New Zealand, Hayden was living on the other side of the world, in Europe, and having a beer with a childhood friend of his, when he first heard about the Mongol Rally.

“A good mate of mine from school, called Alistair, mentioned the idea to me and I said yes on the spot – before I really knew what it was about,” he explained.

“The team was just the two of us to start with, and we had others join us later on for portions of the trip.”

Hayden described himself as “the useless one”, while Alistair was “the leader”.

Another who joined the duo for the majority of the trip was a friend of Alistair’s, Holly, who is now Hayden’s wife.

“Alistair asked me if he could bring a friend and told me she was cute,” Hayden explained.

“So naturally I said yes. I had six weeks of intense travelling to get to know her while she was with us on the trip.”

The three of them – and at one time four when another friend joined them for a week – fitted into a Nissan Micra, which they had bought second-hand from London at the start of the trip and painted red.

As there was no set plan for the three adventurists to follow, they chose “the most interesting route we could think of”, going through the following countries: Britain, France, Germany, Austria, Hungry, Serbia, Romania, Bulgaria, Turkey, Georgia, Azerbaijan, Across Caspian Sea, Turkmenistan, Usbekistan, Tajikistan, Kyrgyzstan, and Kazakhstan.

It was in Kazakhstan that the Nisaan Micra broke down, meaning the team weren’t able to make it to Mongolia and complete the trip.

“We were pretty rough to the little Nissan Micra,” Hayden confessed.

“We had a bit of an unspoken rule on the trip, that if something was a bad idea, we should do it, every time.”

In total, Hayden said the team “had 14 flat tyres, our fuel pump broke off the mounts inside the fuel tank, and when I drove through a bonnet-deep puddle one day an electrical sensor broke, sending us into limp mode”.

“Luckily our team leader was an aircraft mechanic, so I just watched him fix everything while chatting up my future wife,” he added.

Another time, when driving up a remote road off the Pamir Highway, which traverses the Pamir Mountains through Afghanistan, Uzbekistan, Tajikistan, and Kyrgyzstan, the Nissan Micra suffered three flat tyres in under 24 hours.

“Once again the locals helped us fix our tyres and gave us a place to stay for the night,” Hayden explained.

“We were entertained with tales of when the locals were in the Opium running business – all in broken English over some local vodka. The hospitality was amazing.”

Since the locals were so warm and welcoming, Hayden and his team rarely felt unsafe throughout the whole trip.

The New Zealander said: “All the people we met along the way were very friendly and were always trying to help us. It’s unbelievable how people with so little can be happy to give so much to help a stranger.

“The least safe we ever felt was when dealing with police and government officials, to be honest.”

The Nissan Micra seemed to be what put the team in danger more than anything else. Hayden went on to describe another car fiasco, saying: “When we started the trip, we had all of our bags stacked high on the roof, but we found the car couldn’t travel over 50mph on the motorways.

“We figured it was because of the wind, and so we tried strapping the bags to the boot to make the car more aerodynamic. We were able to get to 62mph with one simple modification.”

But despite this, the Pamir Highway still proved difficult, and the car “was so low on power, we couldn’t get out of first gear”.

Hayden continued: “While we were going up the final hill we were foot flat, struggling to keep the car moving. If we stopped we would have had to turn around and get another run-up.

“The car started overheating, so I climbed out the window and stood on the bonnet, pouring cold water over the radiator to keep the car cool. It was actually pretty safe because we were going so slowly – it worked a treat and we made it up and over in one go.”

In Kazakhstan, the team’s final destination, Alistair “accidentally crashed into a hidden rock”, which ripped the car’s front wheel off.

“We had to tie it back together with ratchet straps to try and carry on,” Hayden explained.

“We only made it another few days of driving before the car completely gave way. We never made it to Mongolia and may have to do the trip again.”

But that doesn’t seem to be a problem for Hayden, having described the trip as “a truly unforgettable experience”.

“I have travelled a lot and this is by far the most memorable trip I have done yet,” he said.

The 34-year-old thought back to “one of the most memorable days” in Kyrgyzstan when the team had just made their camp on the side of a mountain, but were told by a group of locals who walked past that “we weren’t allowed to sleep there”.

Hayden said: “We thought we were in trouble, but once they found a translator, it turned out that it was their farm we had stopped on and they insisted we had dinner with them and stayed in their guest house.

“We packed up and followed them to their house for a big feast, lots of vodka and basically a house party. We stayed in an open sided guest house, with views out over the gardens and tried their local breakfast of fresh goat’s milk and butter in the morning. An unforgettable experience.”

But despite the countless issues with the Nissan Micra, the Pamir Highway in Tajikistan was Hayden’s favourite part of the trip.

“Big open mountains, a true feeling of remoteness, super friendly and hospitable locals and just one big adventure,” he recalled.