Inside the breathtaking Shangri-La Paris hotel

I’m in bed in an ‘Eiffel View Room’ in the ultra-luxurious Shangri-La Paris hotel – and discovering that its boast that the room offers ‘stunning views’ of the French capital’s most recognisable landmark is no exaggeration.

Gustave Eiffel’s 1,082ft-high magnum opus looms so large I feel like I could grab hold of it.

The tower lies just a 15-minute stroll away across the Seine river and there is a bank of big windows running the length of the generously proportioned main bedroom and adjacent en-suite, so those magnifique views are readily available, even during one’s ablutions. 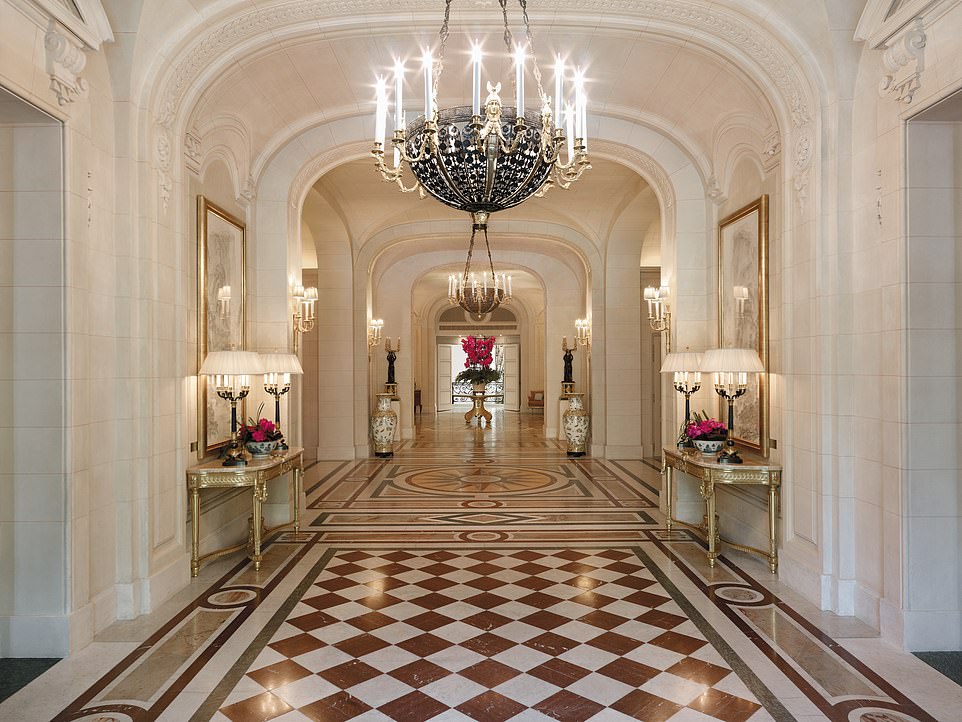 Shangri-La Paris was built to order in the late 19th century as a grand family home by one Prince Roland Bonaparte. The Shangri-La group acquired it in 2006 and carefully renovated it. Pictured is the lobby, constructed using five varieties of marble from the Pyrenees, the Alps and Tuscany 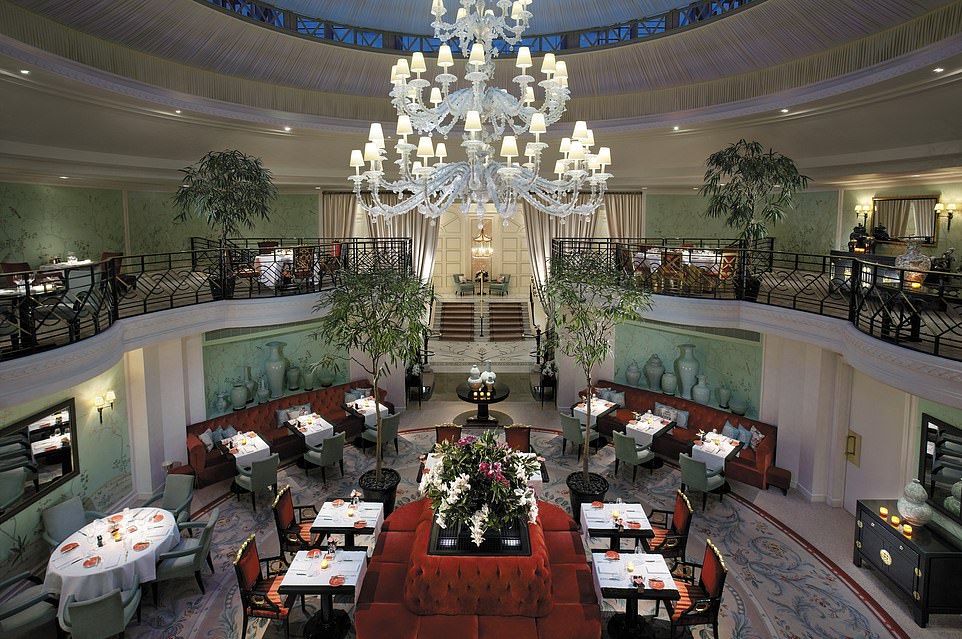 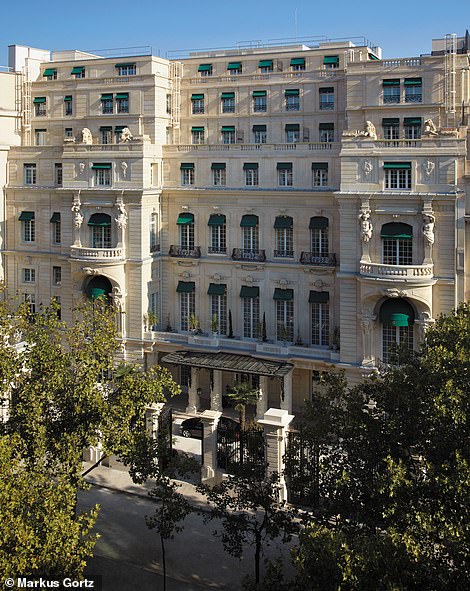 Much of Shangri-La Paris is listed as a historical monument

The windows themselves, though, are modern double-glazed PVC units and seem incongruous with the rest of the hotel, most of which is breathtakingly ornate and much of which is historically significant.

Why? Because the building was built to order in the late 19th century as a grand family home by one Prince Roland Bonaparte, the grand-nephew of French emperor Napoleon, and there was no holding back on architectural flourishes.

The structure was sold to the Suez Canal Bank Company in 1925, the year after Prince Roland’s death at the age of 66, and then bought by the French Centre of Foreign Trade in 1944, which used it to host international business meetings.

The Shangri-La Group acquired the building in 2006 to turn it into its first European hotel and spent four years renovating it, using ‘leading European specialists in historic building renovation to ensure that the integrity of the original home was protected and restored’.

The architect commissioned by Prince Roland to design his home was Ernest Janty, renowned for his reconstruction work at the Louvre – and he produced a masterpiece.

Thanks to the careful work of the Shangri-La team, it remains one. 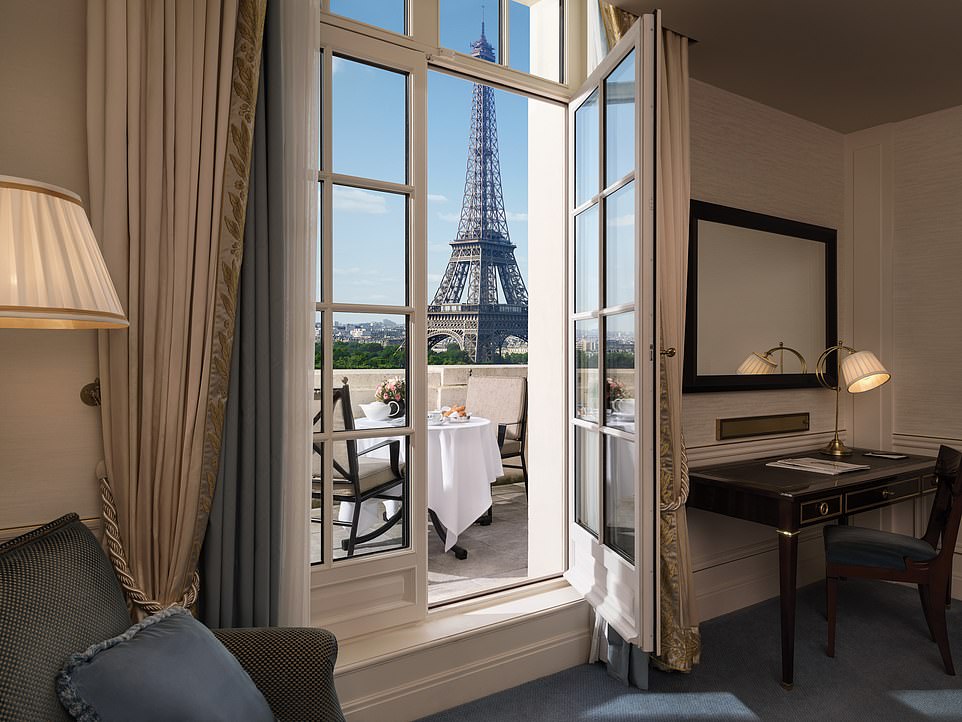 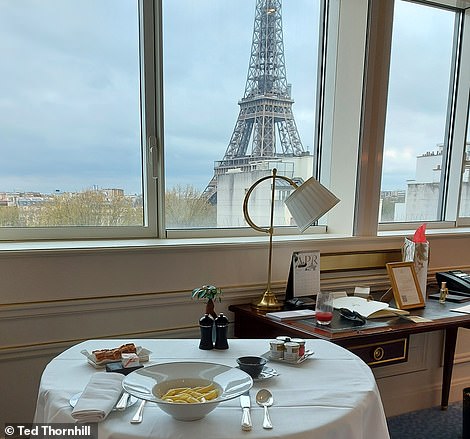 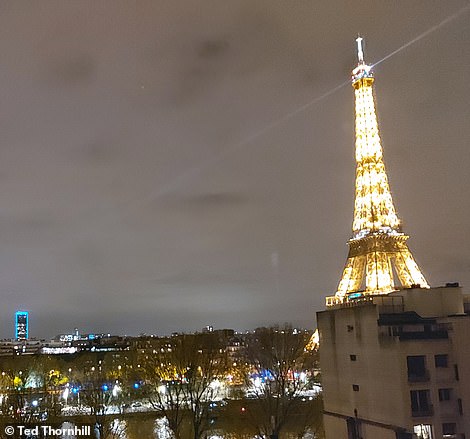 The pictures above show the view of the Eiffel Tower from Ted’s room. He ‘falls asleep each night with the hypnotic nighttime Eiffel Tower light show dancing across the walls’

It’s officially ‘palace-rated’ by the French government. And to stay at the 100-room hotel is to step into a spellbindingly regal world, with service that’s good enough for royalty and dazzling Instagrammable backdrops coming thick and fast aside.

Aside from bedroom Eiffel Tower views, there’s the breathtakingly majestic lobby – constructed with five varieties of marble from the Pyrenees, the Alps and Tuscany – the jaw-dropping two-storey La Bauhinia restaurant, which features a three-tiered Murano chandelier suspended from a glass and steel dome; the opulent Bar Botaniste, which celebrates Prince Roland’s love of botany (he assembled the world’s largest private plant collection); the stunning 17-metre pool in Prince Roland’s former stables, with its beautiful blue tiling and elegant columns; and the arresting and generously chandeliered Shang Palace – France’s only Chinese restaurant with a Michelin star.

It’s cameras at the ready, too, for the parts officially listed as historic monuments, which include the facade, the ground-floor ‘salons’ (where guests can quaff Champagne), the ‘Staircase of Honour’ ascending from the lobby, and Prince Roland’s former private living quarters on the second floor that it leads to, now the hotel’s top room. 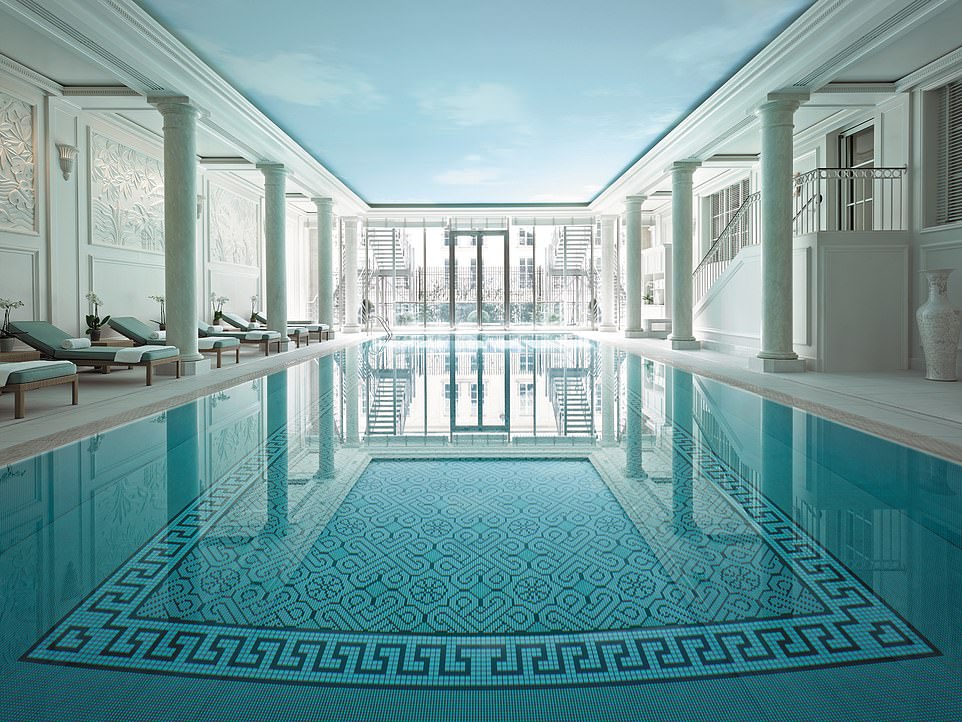 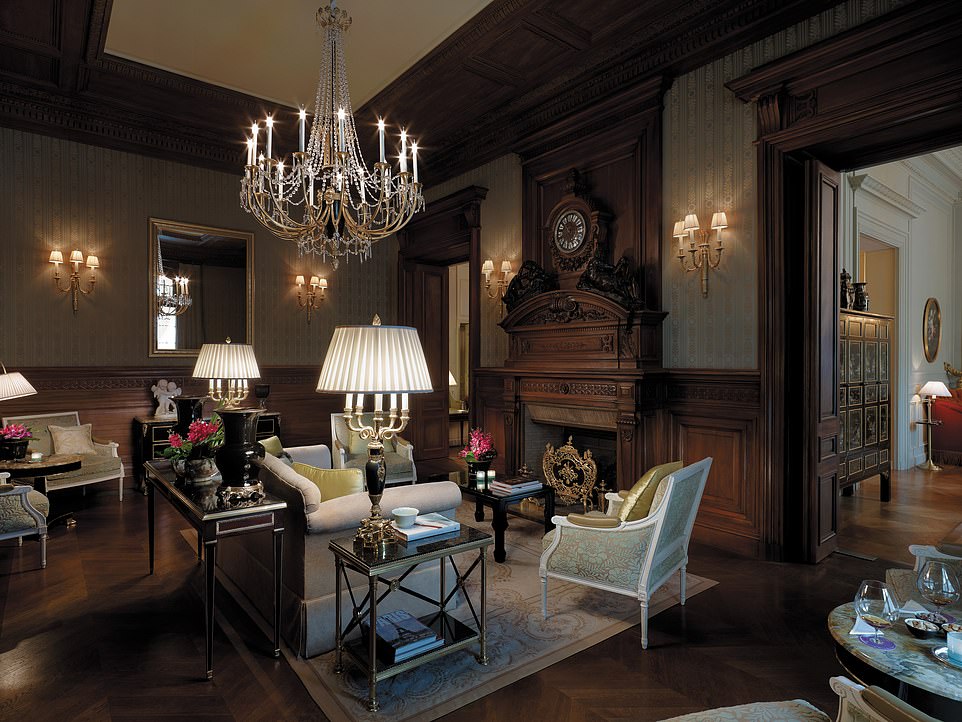 One of the opulent ground-floor salons, where guests can quaff Champagne 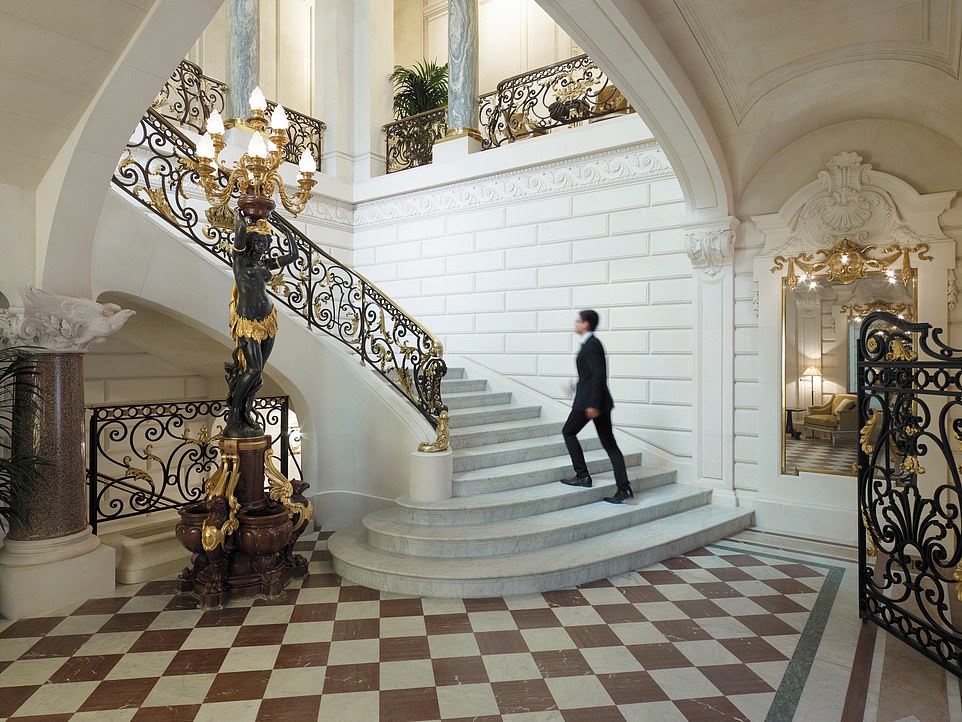 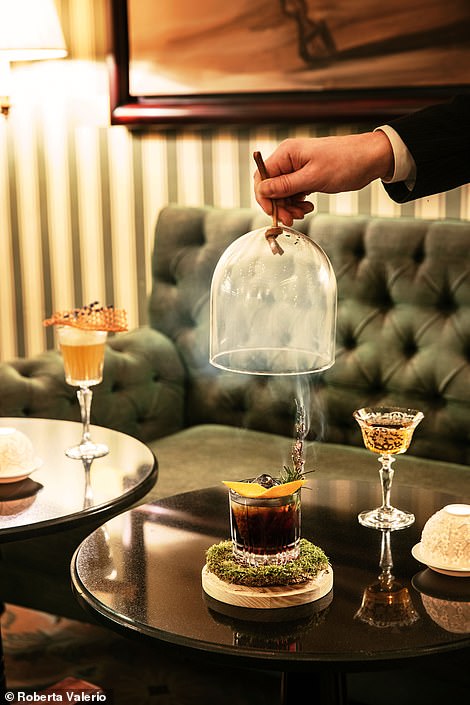 I’m allowed a peek inside ‘L’Appartement Prince Bonaparte’ and can report that it’s a suite of considerable elegance and big enough to host a small ball.

However, the per-night tariff of 18,000 euros (£15,000/$20,000) doesn’t get you Eiffel Tower views. Apparently, Prince Roland wasn’t a fan of Gustav’s handiwork, preferring a view from his chambers of Avenue d’Iena at the front of the building.

The food at Shangri-La Paris’s restaurants is also highly photogenic – and delicious too.

After tissue-livening elixirs at Bar Botaniste (I can recommend the rose-Champagne-based ‘This is Not a Spritz’, served in a bowl-like glass), we revel in the delights of a La Bauhinia dinner, with an exquisite lean-fish carpaccio with citrus marmalade, coconut and lime (32 euros/£26), mouthwatering sea urchin and wakame tarama [a spread made with fish roe] with vegetables and croutons (24 euros/£19), and rustic farmhouse chicken breast with the creamiest of mash (46 euros/£38) scoring top marks.

There’s top wine, too. I indulge in a creamy glass of Chablis premier cru by Domaine Vincent Dauvissat (31 euros/£25).

We’re seated on the central deep-red banquet and to be frank, feel like movie stars. 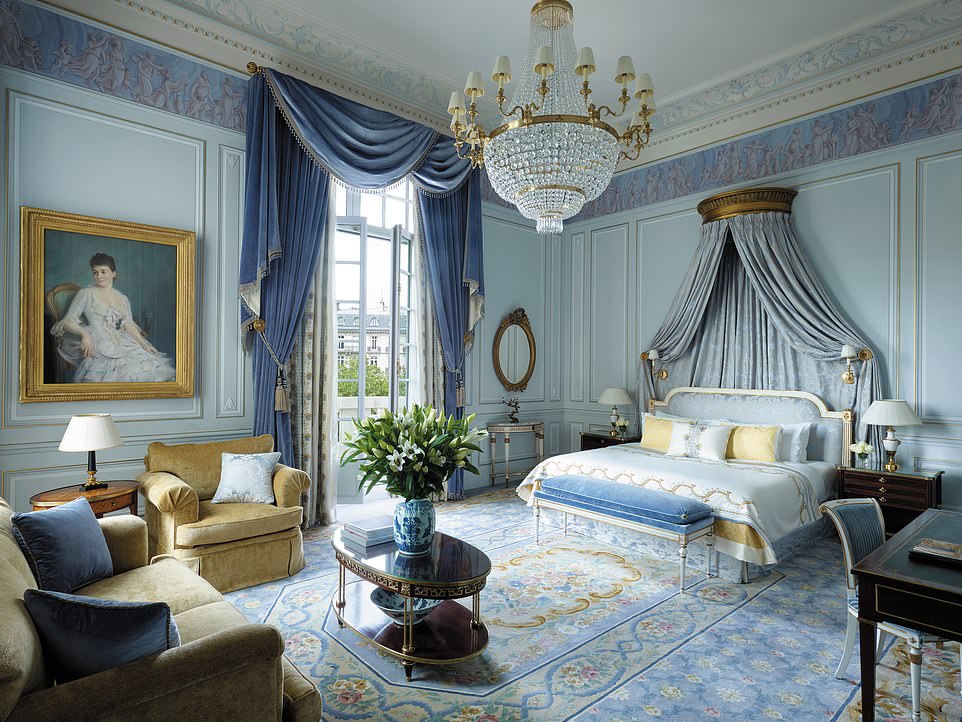 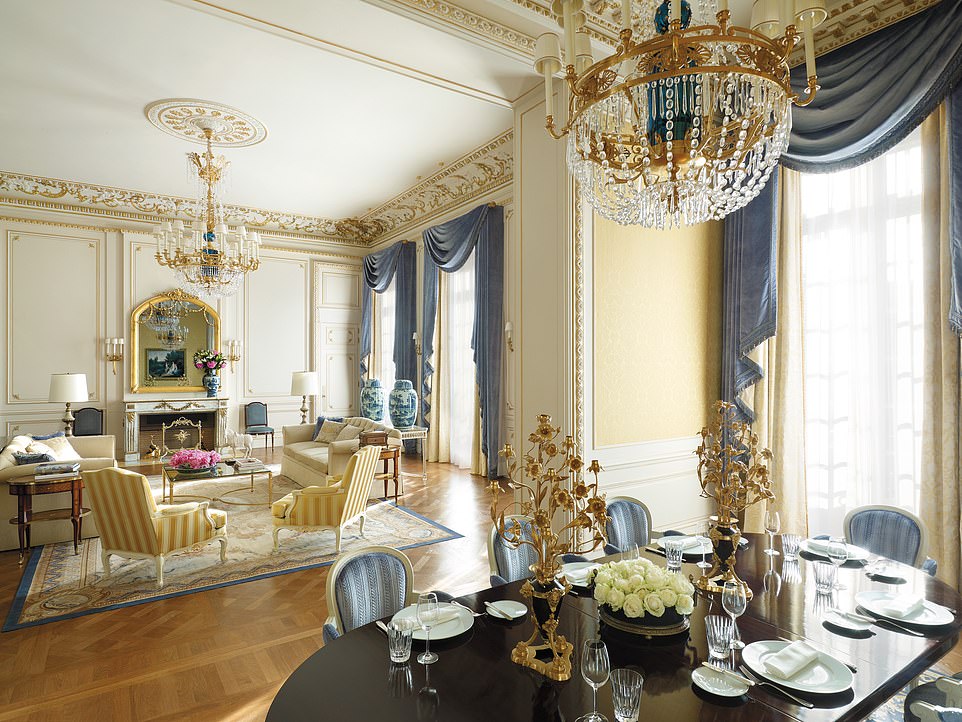 Ted writes of the palatial L’Appartement Prince Bonaparte (above) after being afforded a sneak peek: ‘It’s a suite of considerable elegance and big enough to host a small ball’ 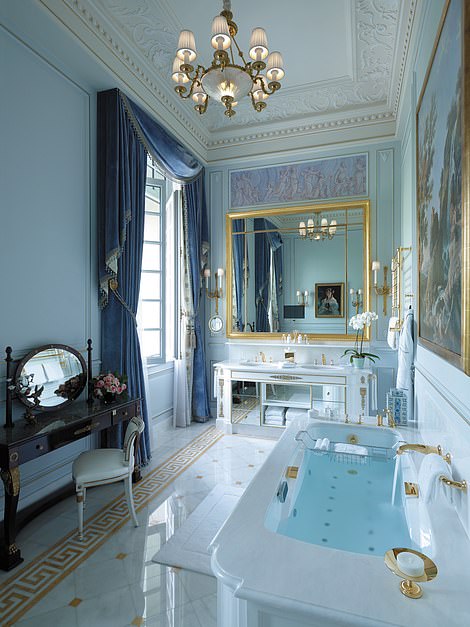 We return to the exact same spot for breakfast the following morning, but keep it very light with coffee and a pastry basket, as we have a midday appointment with Shang Palace and its Michelin-starred Cantonese cuisine.

Which is a revelation.

There’s nothing avant-garde in the cooking here, no leftfield foam-enveloped deconstructions of traditional dishes.

What head chef Samuel Lee does, is present traditional Chinese dishes – most of which you’ll recognise from your favourite local takeaway – and elevate the flavours and textures to a level I promise you will never have experienced before.

With classic wines, faultless service, and a beautiful setting to match.

After being presented with little dishes of soy sauce and chilli paste – ‘to use as “salt and pepper”‘ – we tuck into fried langoustine wonton with sweet and sour yuzu sauce; four delectable dumplings – shrimp; shrimp and pork with crab roe; shrimp and pork with beetroot; and vegetables and mushrooms – pork belly and pickled vegetables; barbecued pork with honey and roasted duck, Cantonese style; egg fried rice, with barbecue pork; and a mango dessert. 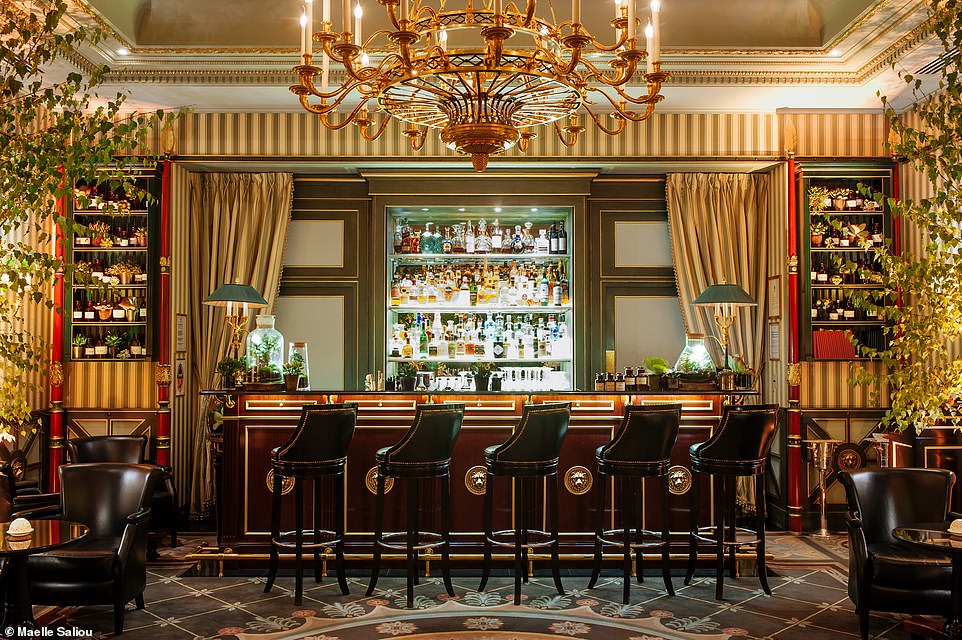 Bar Botaniste, where Ted tries a rose-Champagne-based ‘This is Not a Spritz’, served in a bowl-like glass 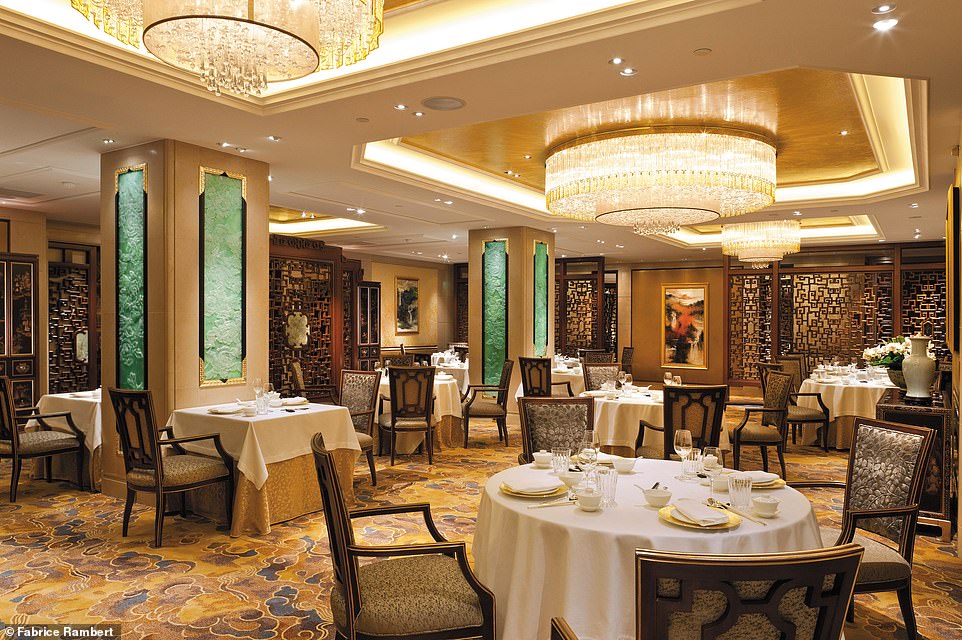 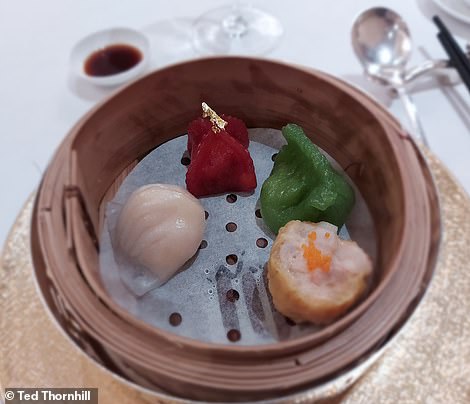 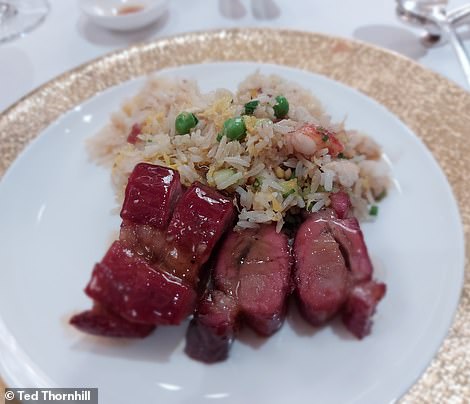 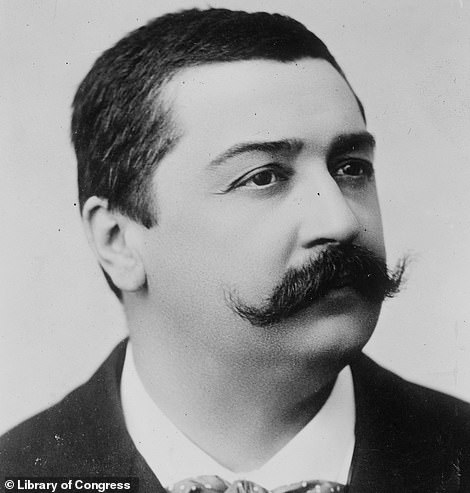 Prince Roland Bonaparte, who died in 1924. He was a notable botanist and explorer

The only very slight disappointment is the dessert, which is refreshing, but a tad bland.

I’m sure Prince Roland would have approved.

Our room would have pleased him, too, with its epic proportions, marble-clad bathroom featuring a heated floor and rainshower, and kingly king-sized bed.

The view, not so much, of course. He would probably hit the bedside ‘blackout’ button to lower the blinds. Me? I fall asleep each night with the hypnotic nighttime Eiffel Tower light show dancing across the walls.

PROS: Exquisite decor, one of the all-time-great city hotel pools, fascinating history and architecture, faultless service, breathtaking Eiffel Tower views from many of the rooms, elevated dining and cocktail experiences.

CONS: A stay is a huge stretch for the average earner, PVC windows in some areas incongruous with the historical architecture.

Ted uses the superb Blacklane chauffeur service to transport him to and from London St Pancras and to Shangri-La Paris. It has a brilliantly user-friendly booking system and operates in more than 200 cities around the world. Visit www.blacklane.com/en.