Barbados: The destination for sea, shells and sanctuary 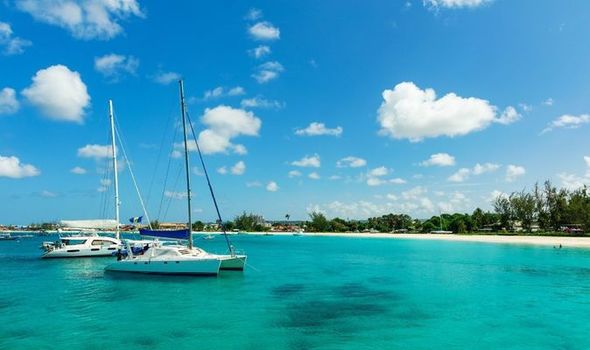 In the glow of the evening sunshine, the catamaran sets sail from Bridgetown, gliding out smoothly into the azure waters of the quay. We follow the curves of the island’s ‘platinum’ west coast, so-called for its glitzy resorts, glamorous restaurants and celebrity guests.

But we’re not here for the cocktails and the people-watching.

We are heading for historic Carlisle Bay, a natural crescent-shaped harbour that was once full of merchant shipping vessels, particularly those of the British.

It’s now a prime spot for snorkelling and scuba diving thanks to its six shipwrecks, along with one of the island’s most precious treasures.

And it’s even easier to reach from the northwest with new direct Aer Lingus flights from Manchester.

We drop anchor and watch our guide, Chris, free dive into the gin-clear waters, home of the famous Barbados sea turtles.

One of the oldest creatures on Earth and protected by the Barbados Sea Turtle Project for more than 25 years, they are an integral part of the island’s biodiversity.

Comfortable with the company of humans, they are happy to be fed by Chris on the seafloor. After motioning us to join him, we slip into the sea, where these rare and gentle creatures allow us to get close enough to almost touch their smooth shells.

Next we explore Berwind, a French military ship which, in a bid to remain on this island, was sunk by its own crew back in 1919. Encrusted with corals and sponges, she is alive with a multitude of sea creatures, which dart and weave with the movement of limbs and fins in a well-rehearsed dance.

Thrilled with our discoveries in the deep, chatter between the tourists on board the Silver Moon Catamaran cruise is animated, as we share a spicy Bajan buffet while sailing back to shore for the 9pm Covid curfew.

It’s no hardship to spend the evening sipping drinks and watching the sunset at the Bougainvillea resort on Maxwell Beach. Its gardens are beautifully adorned with its namesake flower and there are gorgeous views over a pair of white sand beaches.

After a plate of blackened white fish at its shoreline restaurant Calabash, I head back to my room – a sanctuary with soft muted tones and a cool breeze blowing in from the balcony.

After a reboot in 2019, The Sands on Worthing Beach is another super-cool option, with sleek white studios and suites, a long, rectangular seaview pool, plus complimentary watersports.

Eating out is all part of the island experience and Barbados’s dining scene ranges from trendy rooftop restaurants to beachside eateries serving traditional Bajan dishes.

For celeb-spotting head to Fusion Rooftop in Holetown and sample the crispy saffron lobster or A-list favourite Zen at Crane Beach, specialising in Japanese and Thai cuisine.

Barbados has sea conditions ranging from flat calm in the west to pounding surf on the Atlantic east and I joined an excursion to discover its two dramatically different sides.

Cutting through cornfields and riding across bumpy tracks is all part of the fun with Island Safari’s off-road 4X4 trip to the most spectacular and secluded spots. East Point lighthouse on Ragged Point in St Philip, is spectacular for views of the rugged east coast. The tour also stops at 1,000ft high Hackleton’s Cliff, named after Colonel Hackleton who, according to folklore, blindfolded his cheating wife’s horse then rode himself and the horse over the cliff to their deaths.

Bathsheba is a place to stand and Stare at the wild beauty of the mushroom-shaped boulders rooted to the beach as they are pounded by Atlantic waves.

Last stop is Little Bay, where nature has created a small swimming pool in the rocks where waves crash into the sides, creating blowholes which spout seawater high into the air.

While Barbados is famous for its dramatic coast, in the central uplands lies one of its greatest wonders – Harrison’s Cave.

I board the tram for the 30- minute journey through its network of underground caverns filled with towering columns. At the lowest level point in the cave, I alight to walk alongside a spectacular waterfall which plunges into a deep pool below.

Deemed one of the Seven Wonders of Barbados, this natural phenomenon recently received a $6million cash injection to create Chukka’s new Eco-Adventure Park. Set to open next year, it will include a zip tower, nature trail, suspension bridge and infinity pool.

After an underground adventure you may want to experience the highs of hiking at nearby Coco Hill Forest. I join owner Mahmood Patel on a guided tour where he uses a machete to hack through the dense palms along the terraced paths and points out the forest’s tropical plants, herbs and fruits.

Another beauty away from the beach is the Andromeda Botanic Gardens, the only RHS partner garden in the West Indies. Created by Bajan horticulturist Iris Bannochie, she travelled the world collecting more than 500 different trees and shrubs, to form a mesmerising explosion of colour and texture around six acres of lily ponds, waterfalls and meandering paths.

This island has a history as rich as its landscape and at St Nicholas Abbey in St Peter I take a journey into the past at the plantation house and museum. But the highlight for me is riding the heritage railway through sugar cane fields and mature mahogany woodlands to Cherry Tree Hill with its amazing coastal views.

Be sure to round off your visit with a spot of rum, which is distilled on site. If you’re a cocktail connoisseur, visit the Rum Vault in the Colony Club Hotel, which has a collection of 150 varieties.

In Bridgetown, the island’s capital, I meet guide Dawn-Lisa, from Characters of Town, who shares her passion for the town’s past on walking tours. Highlights include Independence Arch, National Heroes Square (where Lord Nelson’s statue was removed last year), and one of the Western hemisphere’s oldest synagogues.

After a week of action, adventures and insight, I’ve bonded with Barbados and I haven’t missed lazy days on the beach one bit.