World Series: Rays Bounce Back With a Narrow Win Over the Dodgers

Early indications that the Los Angeles Dodgers would simply sweep away the Tampa Bay Rays in the World Series were momentarily checked on Wednesday, when good competition returned to the Fall Classic.

The Rays responded after bad loss in Game 1 by beating back the Dodgers, 6-4, in Game 2 at Globe Life Field in Arlington, Texas.

Brandon Lowe, the Rays second baseman who had been in a slump, clouted two home runs and knocked in three runs over all to lead the Rays’ offense, and Blake Snell limited the Dodgers to two runs in four and two-thirds innings to help ensure the Rays recorded a vital victory.

With Lowe shaking off his slump and the team registering 10 hits, the Rays have newfound hope that their entire offense will break out during this Series, as well.

“He can go quiet for a little while,” Rays Manager Kevin Cash said of Lowe. “But he can get as hot as anybody in baseball. Hopefully that’s the trend that we’re looking at going forward.”

Game 3 is Friday night at the same ballpark — all the games of this World Series are being played at a single, neutral site because of the coronavirus pandemic.

Lowe, who hit 14 home runs for the Rays in 56 games during the regular season, entered Wednesday’s game batting just .107 in the postseason with one extra base hit. Though the Rays progressed through the playoffs, Lowe’s frustration built as he wondered when he would hit again, and hit for power.

The answer came on the 10th pitch of the game, when Lowe drilled a 3-1 fastball from Tony Gonsolin, the Dodgers’ opening pitcher, over the wall in left field. Lowe said after the game that he was appreciative that Cash had maintained faith in him, never threatening to bench him or lower him in the lineup.

But Lowe acknowledged that the mental anguish of the slump could be as much of a challenge as opposing pitchers.

“To say that my mind wasn’t going different places during that kind of struggle would be lying to you,” Lowe said.

But after the home run, he said, the feeling in the dugout turned to “Pure joy.”

One night after a strong performance by starter Clayton Kershaw, the Dodgers went with a so-called bullpen game, using a series of pitchers for short stints instead of one starting pitcher to eat up several innings. The strategy was originally popularized by the Rays, but it did not work well for the Dodgers on Wednesday, as Tampa Bay scored six times against five Dodgers pitchers in the first six innings.

Lowe hit his second home run off Dustin May with Austin Meadows on base with two outs in the fifth inning, giving the Rays a 5-0 lead.

At that point, Snell, the 2018 American League Cy Young Award winner, seemed unhittable. Behind a crisp slider, he had thrown four dominant innings with eight strikeouts and just two walks. But things deteriorated quickly in the fifth after he registered two outs, and then it would be Tampa Bay’s turn to call on a series of relievers. 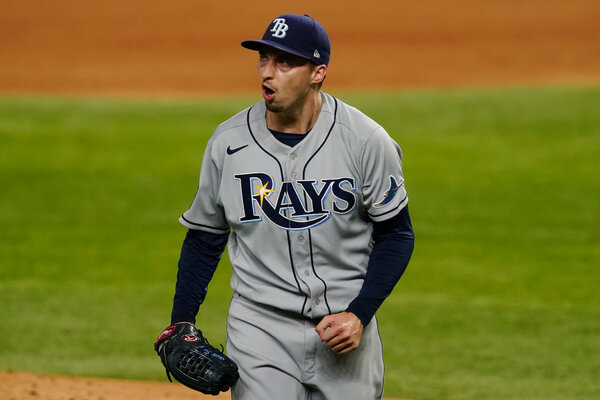 First, Snell walked Enrique Hernandez in the fifth, and then Chris Taylor followed with a home run to right field. Cash left Snell in the game, and the left-hander walked Mookie Betts before giving up a single to Corey Seager. That prompted Cash to emerge from the dugout and signal to his bullpen, and Nick Anderson, Pete Fairbanks, Aaron Loup and Diego Castillo emerged in succession to preserve the Rays’ advantage.

Snell said he felt he had a good game plan: being more aggressive in the strike zone with his breaking pitches to make the Dodgers swing and miss. But he was not enamored of his own performance, finding fault in his four walks, and said he could not blame Cash for removing him from the game when he did.

“He’s trying to win a World Series game,” Snell said, “and I’m out here, I walked two guys in the last three at-bats. I’ve got to do a better job.”

After Anderson ended the fifth by striking out Justin Turner, the Rays extended their lead to 6-2 in the top of the sixth when they scored a run on a sacrifice fly by Joey Wendle — who also hit a two-run double in the fourth. But Will Smith homered for the Dodgers off Anderson, a hard-throwing right-hander, to draw to 6-3.

Seager, the winner of the Most Valuable Player Award for the National League Championship Series, homered off Fairbanks in the eighth to make the score 6-4. Turner followed with a bloop double and that brought Max Muncy, the potential tying run, to the plate.

Fairbanks induced a fly ball by Muncy, but the next batter was Smith, and he lined a shot directly at Wendle at third base, the ball stretching the webbing of Wendle’s glove right in front of his face before he secured it for the second out.

Still, the hard liner by Muncy indicated that the Dodgers were now zeroed in on Fairbanks, so Cash replaced him with Loup, who struck out Cody Bellinger to end the eighth.

Loup notched the first two outs in the ninth. and then Castillo struck out Taylor to end the game, knot the series, and give the Rays new hope that it will be more competitive than it initially looked.

“That game was more indicative of the type of team we have,” Wendle said.