With Patchwork Pitching, the Padres Turn Another Page

When the San Diego Padres announced their first-round playoff roster Wednesday, it was hard not to look and think: Well, it was fun while it lasted. There were 14 pitchers among the 28 names, but not Mike Clevinger or Dinelson Lamet.

Clevinger and Lamet are the Padres’ aces, hard-throwing right-handers with wipeout sliders. They combined for a 2.17 earned run average in 10 September starts — dominant until the moment their arms gave out. Clevinger went down with elbow impingement, Lamet with biceps tendinitis. Both tried to return for Padres’ first playoff series in 14 years, but neither was ready.

“Those two guys are just phenomenal, the way they execute,” said catcher Austin Nola, who joined the Padres in late August. “But as soon as I came to this organization, I realized how many good arms we have.”

On Friday, in the winner-take-all Game 3 of their series with the St. Louis Cardinals, the Padres used nine of those arms — a different one each inning — to survive. Their 4-0 victory was the first nine-man shutout in postseason history, a fitting end to a series in which no Padres pitcher worked more than two and a third innings in a game. The staff combined for 26 appearances to get 27 outs.

For the Padres, patchwork pitching fits with their postseason pedigree. When they won their first pennant, in 1984, the rotation averaged two innings per start in a five-game World Series mauling by the Detroit Tigers.

At least the Padres looked good then — or distinctive, anyway — in their lively brown and gold uniforms. They dropped gold the next year and soon ditched brown for navy blue, with subsequent bland alterations underscoring the team’s fading identity. The Padres won only one more pennant, in 1998, and finally revived their old colors this season.

This year’s team, pitcher Craig Stammen said on Friday, wants to make its own history and “turn the page on maybe some struggles within the organization — the blue Padres. Now we’re the brown Padres, excited to build some new memories with the new colors.” 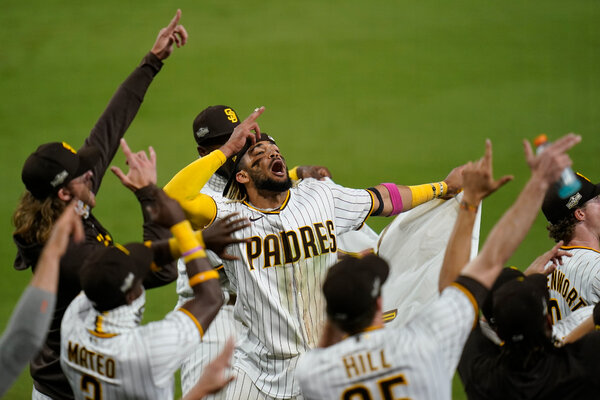 Stammen, of all pitchers, was tasked with that duty at the start of Game 3. The Cardinals had flattened starters Chris Paddack and Zach Davies in the first two games, both times taking 4-0 leads before the end of the second inning. On Friday, Manager Jayce Tingler started with Stammen, whose last 437 outings — dating to August 2010 — had come in relief.

Stammen, 36, is the Padres’ oldest player, a clubhouse leader who has learned to channel adrenaline since flopping in his first playoff experience, for Washington in 2012. On Friday Tingler trusted him with the first leg of an epic pitching relay, no matter his 5.63 regular-season E.R.A.

“We looked at numbers, we looked at other options, and we just gave it to a trustworthy man,” Tingler said. “How he was able to set the tone and get us out of there in an even game, when we hadn’t done that yet — it was huge, and I think it set the tone on the domino effect for the other guys coming in.”

Stammen, a right-hander, retired the side in the top of the first. He gave way to a lefty, Tim Hill, with two outs in the second, and the right-handed Pierce Johnson bailed Hill out of a jam in the third. St. Louis never put another runner past second base, and closer Trevor Rosenthal, a former Cardinal, struck out the side in the ninth.

Padres General Manager A.J. Preller acquired Rosenthal from Kansas City in August after losing Kirby Yates — last year’s major league leader in saves — to elbow surgery. Preller also grabbed Nola and two relievers in an August deal with Seattle, part of a deadline haul in which Clevinger was thought to be the prize.

Preller sent six players to Cleveland for Clevinger, tapping into the prospect depth he had built since taking over in August 2014. Five losing seasons followed, but this year the plan came together, with the highest-paid Padres — Manny Machado, Eric Hosmer and Wil Myers — all producing, and Fernando Tatis Jr. emerging as a magnetic star.

Tatis, 21, smashed two home runs in Thursday’s 11-9 win, punctuating one with a bat flip, a strut and a series of leaping forearm bashes with his teammates. On Friday, Tatis doubled and scored the Padres’ first run in the fifth inning, then was walked intentionally — to load the bases for Machado — in their two-run seventh.

In the field, Tatis made a balletic catch on a wild throw from Hill in the third inning, nicking second base with his foot for a critical force out, and dove on the outfield grass to snare a sinking flare — a “knuckleball line drive,” Tingler called it — in the eighth.

“The talent and energy is off the charts,” Nola said of Tatis. “You can watch it and it just brings everybody’s energy level up when he’s so enthusiastic to play the game.”

That excitement has spread through San Diego, where the Chargers’ departure in 2017 has left the Padres as the only major sports franchise in town. From the field, Hosmer said, the players could hear the fans cheering outside. The city has not won a championship since the Chargers ruled the American Football League in 1963.

“There would be nothing sweeter than to see this place sold out, to see the fans going crazy, to see good baseball being played in San Diego at Petco Park,” Hosmer said. “I know it’s unfortunate they can’t be in the stadium, but we definitely feel their energy.”

Petco Park will continue to host playoff games this month, but in a cruel twist of this strange pandemic season, the Padres are leaving town. The rest of the postseason takes place in neutral sites, so the Padres will play in Arlington, Texas, for their best-of-five division series with the Los Angeles Dodgers starting Tuesday (Clevinger and Lamet, who both played catch on Friday, have not been ruled out).

San Diego, as its team departs, will play host to the Yankees and the Tampa Bay Rays, and then the American League Championship Series.