Lee Evans, the Black American runner who won two gold medals at the racially charged 1968 Summer Olympic Games in Mexico City and at a presentation ceremony wore a Black Panther-style beret and raised his fist to protest racism in the United States, died on Wednesday. He was 74.

His death was announced by USA Track and Field, which did not say where he died or cite the cause.

The newspaper The Mercury News in San Jose, Calif., where Evans grew up, quoted friends of his as saying that he had died in a hospital in Nigeria after suffering a stroke. Evans was an assistant track coach at a sports academy there run by the Nigerian soccer star Segun Odegbami and had coached African track teams for many years. The paper quoted Odegbami as saying that Evans collapsed last week while having dinner with him and other friends.

Evans’s protest at the 1968 Olympic Games made headlines, but it was not the one that shocked the world at those Games.

That was the riveting image of raised fists on the winners’ platform by both American 200-meter sprint medalists, Tommie Smith (gold) and John Carlos (bronze), in what were widely regarded as defiant Black Power salutes as “The Star-Spangled Banner” was played and American flags were raised before a packed Olympic Stadium crowd and a global television audience. 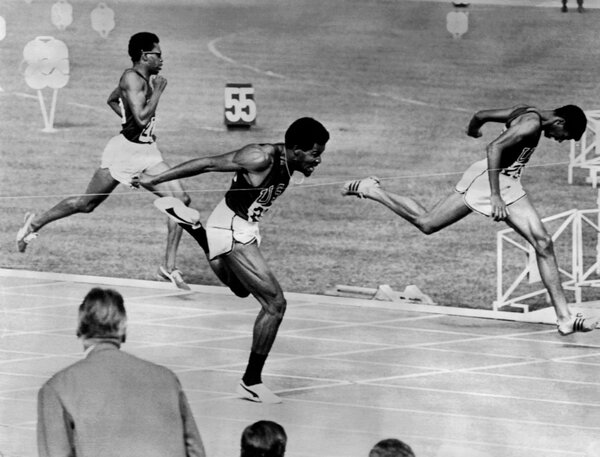 Celebrated in books, films, photo essays and commentaries on civil rights in the world of sports, the protest — coming at a time of assassinations, antiwar demonstrations, urban riots and racial turmoil in America, and defended by Smith and Carlos as “human rights salutes” — marked an end to the age of innocence at the Olympic Games, which were once thought to have transcended domestic and international conflicts.

Evans, one of several Black athletes who had threatened to boycott the Games, faced a dilemma after Smith and Carlos were suspended and then expelled for life from the Olympics for their protest. He agonized over whether to pull out of his two scheduled races — a 400-meter run two days later, and a 1,600-meter team relay three days after that. Withdrawal, he knew, might end his running career.

Carlos persuaded him to go ahead, he said. And in the rarefied air of Mexico City, 7,350 feet above sea level, he smashed two world records. He won his first gold in the 400-meter in 43.86 seconds, a record that stood for 20 years, and his second gold anchoring the United States team in the 1,600-meter relay, run in 2 minutes 56.16 seconds, a record that lasted for 24 years.

The 400-meter race was swept by three Americans: Evans took the gold, Larry James the silver and Ron Freeman the bronze. On the victors’ platform afterward, all three received their medals wearing berets like those identified with the Black Panthers, and all three raised their fists, as Smith and Carlos had. But they lowered them and removed their berets when the national anthem was played and the American flags were raised.

That conciliatory gesture was taken into consideration by the International Olympic Committee, which did not penalize or reprimand the three sprinters — although Evans, at a news conference after the ceremony, said, “I feel I won this gold medal for Black people in the United States and Black people all over the world.”

After winning the 1,600-meter relay, the American team — Evans, James, Freeman and Vince Matthews — staged no demonstration during the awards ceremony, although Evans refused to shake hands with an Olympic official.

But protests rippled through the 1968 Olympics, including declarations of support for Smith and Carlos by other American medal winners and a decision by victorious Cuban runners to send their medals to Stokely Carmichael, the former chairman of the Student Nonviolent Coordinating Committee, who had been named “honorary prime minister” of the Black Panther Party.

Evans continued to compete in 400-meter races after his 1968 Olympic triumphs, but he never again dominated the event as he had in Mexico City. He won the United States national championships in 1969 and 1972, but finished fourth in the 1972 Olympic trials. He was selected for the 1,600-meter relay at the 1972 Munich Games, but the United States could not field a team because two runners had been suspended for staging yet another demonstration at the Olympics four years earlier.

Lee Edward Evans was born on Feb. 25, 1947, in Madera, Calif., the oldest of seven children of Dayton and Pearlie Mae Evans. His father was a construction worker. The family moved to San Jose in 1962 and picked cotton in the San Joaquin Valley in the summers. Lee never forgot how a field boss had cheated them at the weigh-in scales.

“I was scared they’d send the whole family away, so I didn’t say anything,” he recalled. “I’ve always been ashamed of that.”

At Overfelt High School in San Jose, from which he graduated in 1966, he developed into a gangly but powerful runner. He went undefeated in his high school career and won the first four Amateur Athletic Union races he entered.

Evans was a brilliant middle-distance runner. Many who follow track and field call the 400-meter a killer race, demanding the speed of a sprinter and the endurance of a long-distance runner. It is basically a quarter of a mile at the breakneck pace of a 100-yard dash.

While attending San Jose State University, Evans won the 400-meter at the 1967 Pan American Games and the 1968 N.C.A.A. championships. He and his teammates Smith and Carlos became followers of Harry Edwards, the San Jose State sociologist who founded the Olympic Project for Human Rights. The organization was unable to get Black athletes to boycott the Mexico City Games but inspired the fist salutes and other protest gestures there.

Evans graduated from San Jose State in 1970 and from 1972 to 1974 competed in the International Track Association, a short-lived professional circuit. In addition to Nigeria, he later coached track and field in Cameroon, Qatar, Saudi Arabia and other countries. He was an assistant coach at the University of Washington in 2000 and 2001 and then head coach at the University of South Alabama until 2008, when he returned to Nigeria.

Evans had a son, Keith, from a marriage that ended in divorce in 1971. He and his second wife, Princess, a Liberian refugee, hoped to build a school near Monrovia, Liberia. He was in California to raise money for the project in 2011 when he learned that he had a brain tumor. The tumor was found to be benign and removed.

Complete information on survivors was not immediately available.

In 2014, Evans was banned from coaching for four years by the Athletics Federation of Nigeria for giving a schoolgirl performance-enhancing substances that might have been responsible for her failing a doping test. But in 2019, apparently rehabilitated in the eyes of his many fans, he appeared on Nigerian television as a national hero, presented as a special guest of the Sports Parliament on NTA, the country’s largest network.