While the opening three days in Denmark had already been publicised, the rest of the route was unveiled in a ceremony before an audience of several thousand at a Paris conference centre on Thursday (Oct 14).

Cycling fans can look forward to a pulsating penultimate day with a time trial over a 40km course.

Other highlights will be a stage on the cobbled roads of Roubaix on the border of France and Belgium, and massed ranks of spectators will be allowed on the classic climb of the Alpe d’Huez on the French national holiday of July 14, provided new coronavirus precautions are not introduced.

The 2022 route looks favourable to all-rounders who can master the time trial, such as reigning two-time champion Tadej Pogacar and his compatriot, Olympic champion Primoz Roglic.

There are two time-trial stages over more than 50km, although riders will also be put to the test over five massive mountain stages.

Pogacar, however, denied he would be favourite for a third yellow jersey.

“I’ve won two so I’m more confident but every year is different so it’s back to zero,” the UAE Emirates team rider said.

“There’s lots of tricky stages with either wind or cobbles or little climbs where you can make a mistake, and the Alps looks tough, I’d say the Alpe d’Huez would be the big one,” said the 22-year-old.

The race also takes in the pilgrimage town of Lourdes and the picturesque medieval city of Carcassonne in south-west France.

The race begins with a short 13km time trial around Copenhagen, passing by the bronze statue of the Little Mermaid.

But the key challenges in Denmark will be runs along the fjords and the crossing of a 17km bridge over the sea between two islands. 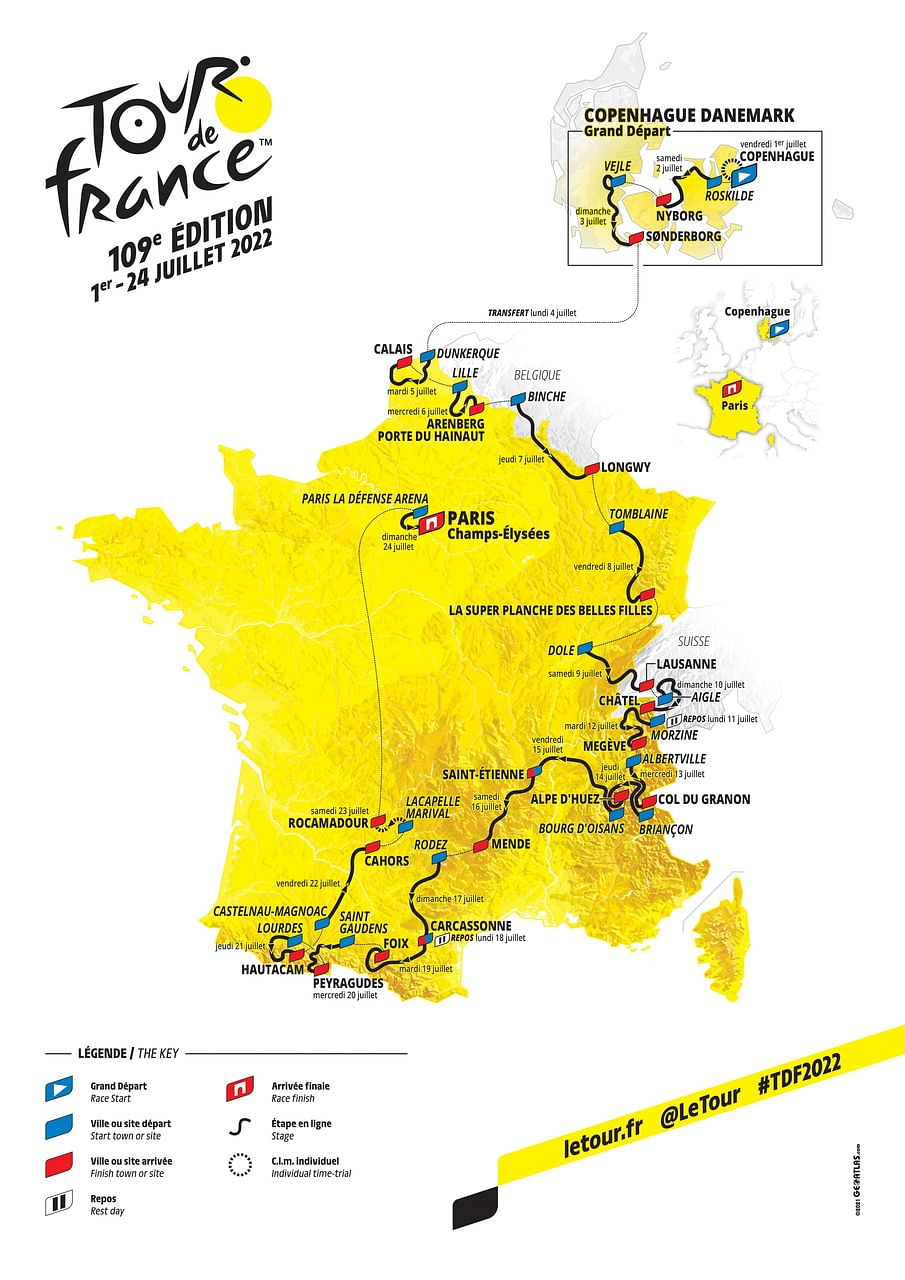 The 2021 runner-up Jonas Vingegaard is Danish and there will be several Danes at the start in 2022.

While the route avoids the entirety of France’s western coast, it is at least balanced on a sporting level.

“It’s a race with a bit of everything,” course designer Thierry Gouvenou told AFP. “The word that best captures how to describe the 2022 route is that it’s complete.

“You’ll need to be at ease with wind too, because of this bridge over the sea in Denmark and also on the stage to Dunkirk,” he said of the final Danish run and the first French one on stage four.

More on this topic

“The cobblestones might also have their say on how things go in the race for the (winner’s) yellow jersey. There are 19km of them, that’s complicated for a lot of people,” he added.

“But anyone who wins will need to be a complete rider because there are five finishes at high altitude and one of them is at 2,400 metres.

“You have the entire palate of what it is possible to provide on a Tour de France.”

The winner will pull on the yellow jersey on the Champs-Elysees after eight laps of the French capital on the final day.