After losing to Jannik Sinner, Zverev said he “shouldn’t have played” and had a fever and difficulty breathing. Tournament officials said Zverev did not report his symptoms before the match. 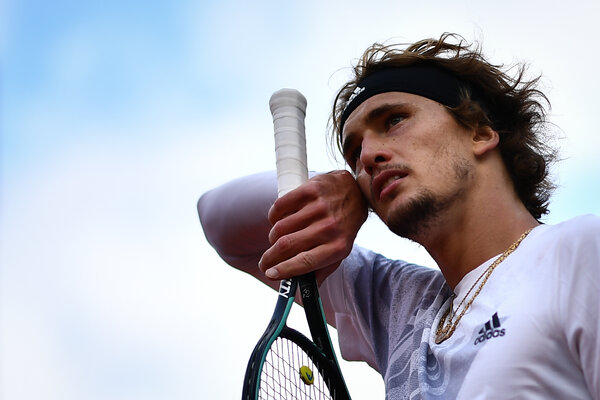 Alexander Zverev lost in the fourth round of the French Open on Sunday, but it became quickly clear after the match that he likely should not have competed at all.

“I’m completely sick,” Zverev said following his four-set loss to Jannik Sinner, taking the unusual step of leaving his black mask on while seated in an empty room at Roland Garros to answer questions from reporters during a videoconference.

“I can’t really breathe, as you can hear by my voice. I had fever as well. Yeah, I’m not in the best physical state, I would say,” Zverev said. “I think that had a little bit of an effect on the match today.”

French Open officials said Sunday that Zverev had not shared the details of his symptoms with tournament doctors as he arrived to play, as required by the event’s coronavirus protocols. It is not clear whether Zverev has contracted the virus — he has tested negative repeatedly, though most recently five days ago — but the episode immediately raised questions about the precautions taken by the French Tennis Federation for a marquee event in a country that has seen an uptick in coronavirus cases and recently imposed tighter limits on large gatherings.

“Zverev is up-to-date on his tests, which have all been negative,” the French Tennis Federation said in a statement. Zverev’s last test was on Tuesday, with the negative result returned on Wednesday, the federation said. “Today he received a reminder for his next test, to be carried out within five days of the previous results,” the federation said. “He did not consult the tournament doctors before his match.”

Zverev consulted with tournament medical officials during the first set of the match who gave him a nasal spray that he used on both nostrils.