This stripped-down college football season, played in subdued stadiums without bands, mascots and much of the pageantry that make the sport so alluring, ended the way many others had before the pandemic — with Alabama as champion.

It was the 13th national championship for Alabama, and the seventh overall for Saban, who won one at Louisiana State before arriving in Tuscaloosa to restore the shine to a program that became a national power under Bear Bryant.

If this one will be memorable for the atmosphere in which it was played — a mere 14,926 fans peppered throughout Hard Rock Stadium — it was remarkable for the manner in which Alabama stamped its transition under Saban from a defensive colossus to an offensive juggernaut.

Alabama scored touchdowns on seven of its first nine possessions, settling only for a field goal when it opened the second half by driving to the Ohio State 3-yard line and ruing only a fumble by quarterback Mac Jones. The Crimson Tide rolled up 621 yards in total offense.

The star among stars, as it has been often for Alabama, was receiver DeVonta Smith.

Smith, the Heisman Trophy winner, caught 12 passes for 215 yards and three touchdowns — all in the first half. He left early in the third quarter with an injury to his right hand. He watched the final minutes in street clothes on the sideline.

Smith was among a handful of Crimson Tide players, along with tackle Alex Leatherwood and running back Najee Harris, who returned this season rather than leave early for the N.F.L. They did so determined to boost their pro stock, but also to wash away the distaste of last season, when they lost twice in the regular season for the first time in a decade — to national champion L.S.U. and rival Auburn — and were left out of the four-team playoff for the first time since it was instituted in 2014.

“Perseverance is probably the one word that describes this team the best,” Saban said in an on-field interview after the game. 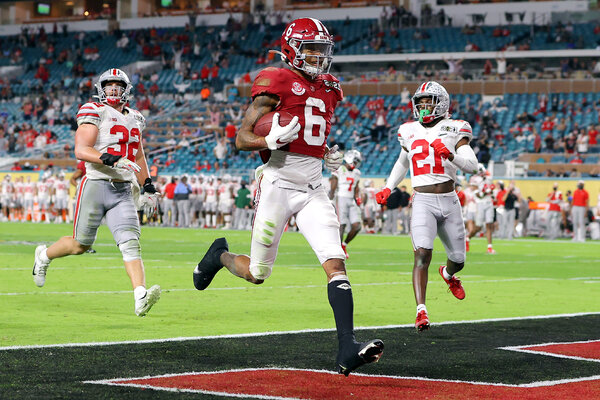 He was talking not so much about what Alabama managed on the field this season, when it rolled past all 13 opponents — no game closer than 6 points — but off it as Alabama, like many other programs around the country, copped with the fits and starts that were wrought by the coronavirus pandemic.

Despite the extensive measures — regular testing, contact tracing and quarantining — college football never shook free of the pandemic’s grip. More than 150 games were canceled or postponed and more than 6,600 virus cases were reported in university athletic departments — including the two coaches in the title game, Saban and Ohio State’s Ryan Day, who each missed a game after testing positive.

Mostly, though, college football plowed ahead.

That was clear when the Rose Bowl was moved from its home in Pasadena, Calif., to Arlington, Texas, after Notre Dame Coach Brian Kelly threatened a boycott because players’ families (and any other fans) were prohibited by local health measures from attending. It was evident again on Monday when Hard Rock Stadium’s drive-through vaccination site was shuttered at noon so it would not interfere with the game.

And then, as if another reminder was necessary, about an hour before kickoff, Ohio State — beset by positive cases since November — announced that 13 players would be inactive, most presumably related to the virus.

Among them were two stalwarts on the defensive line — nose tackle Tommy Togiai and end Tyreke Smith — along with kicker Blake Haubeil and reserve running back Miyan Williams.

The Buckeyes roster got even thinner after one play.

Trey Sermon, the Oklahoma transfer who had emerged from the depth chart to rush for a school-record 331 yards in the Big Ten championship win over Northwestern, was driven to the turf after a short carry with a left shoulder injury and did not return.

That shifted an even greater burden onto Fields, who needed a painkilling injection to be able to play through a brutal hit — a helmet to the back ribs — in the semifinal win over Clemson. The injury turned Fields, a gifted physical runner, into a pocket passer, depriving the Buckeyes of another element of their attack.

The Buckeyes, perhaps more than any other team in the country, were no strangers to disruptions. They had three games canceled, playing only eight games total, and Monday was the fourth consecutive game they had been missing at least a dozen players.

Ohio State hung with Alabama for a while — in part thanks to some munificence from the Crimson Tide. Jones fumbled at his own 19-yard line to set up one touchdown, Jordan Battle kept a drive alive with a helmet-to-helmet blow for which he was ejected and Patrick Surtain II dropped an interception in the end zone, which was followed by a field goal.

The Tide flashed every element of its arsenal — a bullish offensive line gave space to Harris, a 6-foot-2, 229-pound back with the feet of a ballerina, and time to Jones, who dissected the Ohio State defense like it was a biology lab frog. More often than not Jones, who threw for 464 yards and five touchdowns, put the ball in the hands of Smith, the sleek and slippery receiver with the Venus flytrap hands.

Making it all sing was offensive coordinator Steve Sarkisian, the new coach at Texas who bamboozled an Ohio State defense that hoped to bend but not break, yet accomplished neither.

Harris, who bulled into the end zone on fourth down from the 1-yard line, later leaked out in the flat uncovered against a blitz and turned a looping pass from Jones into a touchdown that put Alabama ahead for good, 21-14, with nine minutes left in the second quarter.

Sarkisian managed a neat trick near the goal line: losing Smith in a backwash of clever motion. It allowed Smith to catch short passes that he turned into touchdowns by outracing scrambling defenders. Alabama finished its second-quarter scoring blitz in almost comical fashion: with Smith lined up against middle linebacker Tuf Borland, who looked as if he was running in sand as he chased Smith on a 42-yard touchdown pass.

The play was much like the rest of the night: a mismatch.

Related posts:
Hot News
Billboards urge protection of Canada geese to appear in Denver
Uganda presidential election: Incumbent Yoweri Museveni declared winner
Alexey Navalny: Poisoned Putin critic faces jail on return to Russia
Death row inmate’s ‘extremely painful death’ felt like drowning for 20 minutes
Spain weather horror: Cold snap to continue ravaging nation into next week
Death row killer calmly declares he was innocent in his chilling last words
Macron on the brink: ‘Panicked’ French leader attacked over ‘failed’ vaccine rollout
Recent Posts
This website uses cookies to improve your user experience and to provide you with advertisements that are relevant to your interests. By continuing to browse the site you are agreeing to our use of cookies.Ok