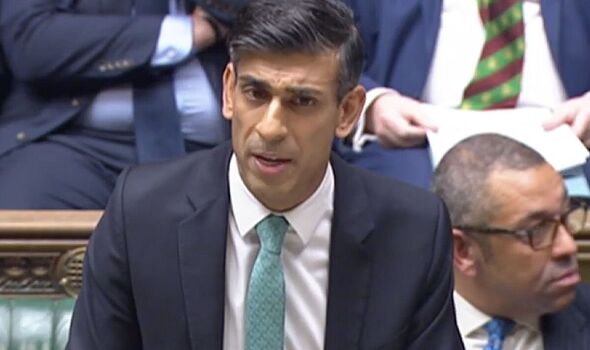 Rishi Sunak outlined his new plan to crack down on illegal immigration this afternoon as he declared: “Enough is enough!”

The Prime Minister said “no one can doubt our generosity of spirit” to asylum seekers but warned too many people were exploiting Britain’s hospitality.

Speaking in the House of Commons Mr Sunak set out efforts to clear the backlog of asylum claims by the end of next year, restart deportation flights to Rwanda, and return those from safe countries.

He told MPs: “I hope the whole House would agree that there is a complex moral dimension to illegal migration, the balancing of our duty to support people in dire need, with the responsibility to have genuine control over our borders understandably provokes strong feelings.

“So it is my view that the basis for any solution shouldn’t just be what works, but what is right.

“The simplest moral framing for this issue, one I believe members on all sides of this House believe in is fairness.

“It is unfair that people come here illegally. It is unfair on those with a genuine case for asylum when our capacity to help is taken up by people coming through and from countries that are perfectly safe.

The Prime Minister said his plans see the removal of Albanian asylum seekers from the UK fast-tracked and at the same time Home Office workers would be embedded at Tirana airport to work with local authorities to disrupt people smuggling operations.

He said the “new dedicated unit” for Albanian migrants would be staffed by 400 new specialists.

Mr Sunak added: “Over the coming months, thousands of Albanians will be returned home and we will keep going with weekly flights until all the Albanians in our backlog have been removed.”