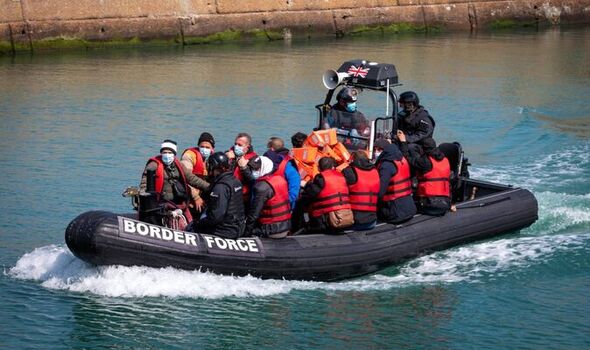 Brandon Lewis said that the Government was determined to press ahead with the deporations which he says will help solve the migrant boat crisis. And the Rwandan government pleaded for the “well thought out” asylum scheme to be given a chance.

Last week a judge rejected an attempt by rights campaigners and trade union leaders to have Tuesday’s flight halted, with an appeal scheduled to take place on Monday.

The flights, revealed in April under a £120million deal with the Kagame regime, have faced vocal criticism.

The Prince of Wales has reportedly described the scheme as “appalling” – triggering a major row with ministers who feel he should emulate the Queen and keep quiet on political issues.

Northern Ireland Secretary Mr Lewis defended the migrant policy and said it would not be “appropriate” to comment on “rumoured” criticism from the Prince of Wales.

Asked if he was personally comfortable with the policy, he told Sky News’ Sophy Ridge on Sunday: “Yes, I am, actually.”

On reports Prince Charles had privately described the policy as “appalling”, Mr Lewis said: “They’re not just private comments, they’re rumoured private comments, and I don’t think it’s appropriate to comment on what somebody says they might have heard without any context of it.

“The reality is this is a policy that is going to deliver to ensure that modern slavery and these people smugglers know that their criminal methods will be broken down, and saying to people around the world ”if you are a refugee, if you are an asylum seeker, if you are a legal migrant coming to this country, we want to give you the support to properly help you be part of the UK economy, part of the UK way of life, which is what you want”, and that’s right.

“We’ve got to do that in a proper, legal, managed way and people who are encouraging you to travel illegally are wrong, and we’re going to break their business model.”

More than 10,000 people have made the perilous journey across the English Channel so far this year.

Priti Patel will this week launch an advertising blitz directed at migrants to warn that if they enter the UK they could be sent straight to the African country.

The campaign comes as she faces the second round of a legal battle to ground the first flight containing 31 asylum seekers.

It is understood the Home Secretary intends to overhaul laws on modern slavery to stop them being used by Left-wing lawyers to block deportations in future.

She is also examining whether to cut funding to United Nations bodies which engage in legal action against the British Government.

Rwanda’s government publicly gave its backing for the scheme yesterday.

Yolande Makolo, a spokesperson for the Kigali government, told Sky News: “People need to give this partnership a chance. It’s very well thought out. It’s going to be well resourced.

“At the heart of this partnership is humanity.”

Clarence House insisted the Prince of Wales had not tried to influence the government.

A spokesperson said: “We would not comment on supposed anonymous private conversations with The Prince of Wales, except to restate that he remains politically neutral. Matters of policy are decisions for government.”