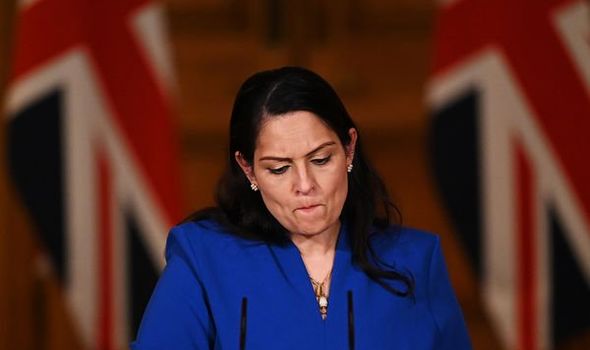 The Home Secretary has faced a fierce backlash after it was announced that pay for officers earning over £24,000 would be frozen this year.

The Police Federation said it felt betrayed by the real-terms cut, adding that it had “no confidence” in the Cabinet minister.

But national federation chairman John Apter said there is still time for her to regain the support of his 130,000 rank-and-file officers.

He told LBC: “We feel bitterly let down, betrayed, and this isn’t just about the pay announcement that was, as you say, the final straw.

“This goes back to the vaccination programme. Let’s look at the way that we were vilified and then hung out to dry during the pandemic, with the Home Secretary saying nice things and not following it up.

“It’s not too late to do what the Health Secretary did, which is a U-turn and make the announcement for the NHS staff.”

Pay freezes were announced this week for most public sector workers, but NHS staff will get a three percent rise which is to be paid out of existing health budgets.

Northamptonshire Chief Constable Nick Adderley said: “The announcement today of a zero percent pay increase for police officers is, quite frankly, an insult and wholly unacceptable.”

Matthew Scott, Kent’s police and crime commissioner, said: “Police have been at the frontline of this pandemic, dealing with the enforcement of regulations whilst still doing their regular work, and experiencing a massive increase in assaults.”

However, the Home Office said it had pumped up to £600million more into the police and given forces £200million to cover Covid costs.

A spokesman said: “The Home Secretary has demonstrated her commitment time and time again to supporting police officers who keep us safe.”

But they added: “The economy has been significantly impacted by the pandemic, with pressures on public finances, and we must protect jobs and ensure fairness.”