Brexit: Michael Gove says it’s ‘in EU’s interest’ to get a deal

Mr Gove, who as Chancellor of the Duchy of Lancaster is playing a key role in liaising with the EU about the practicalities of Brexit, will discuss the provisions of the Government’s controversial Internal Market Bill, due to get its third reading in Parliament this week. The legislation, which would give the Government the power to override some aspects of the Northern Ireland Protocol, is a source of considerable concern to the EU, which is threatening legal action if it is implemented. 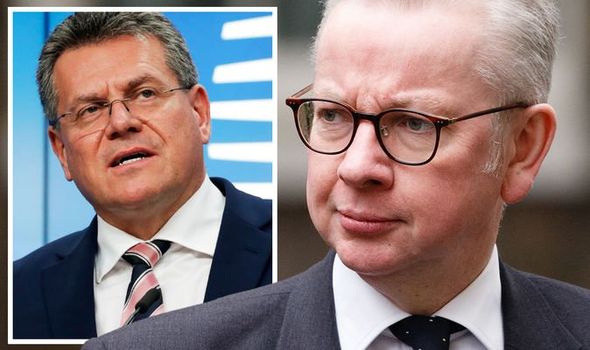 A Government statement said: “The Chancellor of the Duchy of Lancaster will meet Vice President Sefcovic today in Brussels to discuss issues related to their work as co-chairs of the Withdrawal Agreement Joint Committee.”

ITV’s political correspondent Daniel Hewitt tweeted: “Michael Gove heading to Brussels to discuss stand off over the controversial clauses in the Internal Market Bill, as FTA talks hang in the balance. Significant.”

Mr Sefcovic himself likewise confirmed details of the meeting, posting: “I will meet @michaelgove today in Brussels to discuss the implementation of the Withdrawal Agreement, including the Protocol on Ireland and Northern Ireland.

“We are working hard to make sure it is fully operational as of 1 January 2021.”

The House of Commons is due to begin discussing the Internal Market Bill today.

One unnamed senior official suggested the fact it was going through Parliament this week would not help trade negotiations “in the least”.

The European Union confirmed at the beginning of last month it was launching legal action in respect of the legislation, which European Commission President Ursula von der Leyen said  “by its very nature is a breach of the obligation of good faith laid down in the Withdrawal Agreement”.

She added: “If adopted as is, it will be in full contradiction to the protocol of Ireland-Northern Ireland” in the withdrawal agreement.”

Speaking today, an EU diplomat said British and European Union negotiators have still not bridged gaps on the three main issues standing in the way of a post-Brexit trade deal.

They explained: “Despite intensive negotiations until late last night, the gaps on level playing field, governance and fisheries are still not bridged.

“The outcome is still uncertain, it can still go both ways.”