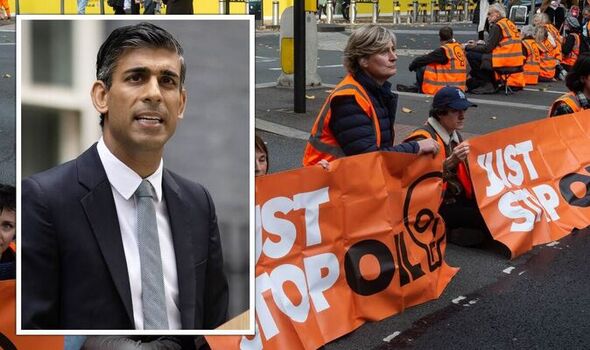 Their intention was to give Government ministers time to meet their demands to put a stop to all new fossil fuel projects.

In a press release on November 1, the group said their “campaign of civil resistance” is on pause “giving time to those in the Government who are in touch with reality to consider their responsibilities to this country at this time.”

The activists have been running a disruptive campaign which included throwing soup at Vincent van Gogh’s Sunflowers at the National Gallery in London. Although the painting — which was protected by a glass cover — was left intact, the action polarised the public resulting in widespread media coverage of their campaign.

Earlier this week, the activists also used orange paint to spray-paint buildings across the capital including the Home Office, MI5, News UK and Bank of England.

The campaign group said the Government is running out of time.

A statement read: “If, as we sadly expect, we receive no response from ministers to our demand by the end of Friday 4 Nov, we will escalate our legal disruption against this treasonous Government. Our action will be proportionate to the task of stopping the crime against humanity which is new oil and gas.”

Just Stop Oil is demanding the Government halts all new fossil fuel projects in the UK. Prime minister Rishi Sunak has promised to reverse Liz Truss’ lift on shale gas fracking, however, his government has not announced plans to stop a drive for new North Sea oil and gas licences. Under her brief premiership, Lizz Truss gave oil and gas companies the go-ahead to explore the North Sea for fossil fuels.

The move could result in over 100 new licences for companies like BP and Shell.

In response to the announcement, international charity Global Witness said: “The immediate priority for this government should be supporting UK citizens facing crippling energy bills while also transitioning to renewable energy sources, to protect both our climate and consumers from an energy crisis that’s caused by fossil fuel dependency.”

Instead, [the] government is gifting a new set of licenses to an industry that’s already making obscene profits from the skyrocketing cost of gas so that it can dig us even deeper into this mess.”

Sunak, who accepted donations from supporters with links to the fossil fuel industry to fund his August Tory leadership campaign, agreed with Truss’ plans to open up the North Sea. Based on this, it seems likely that Just Stop Oil will be back in action soon.

He also sparked anger when he announced that he would not attend the COP27 climate summit next week, a decision he has now U-turned on.

A spokesman for Just Stop Oil told Express.co.uk: “Rishi Sunak is ditching the toxic policies of Liz Truss, he now has the opportunity ahead of COP27 to demonstrate leadership on a global scale, and ditch the most toxic policy of all new oil and gas. In doing so he will be protecting our rights and freedoms, and our democracy.

“The ordinary people who support Just Stop Oil are worried about their safety, this is the reason why they act. Nothing so far has worked to end new oil and gas, to end the grip of the huge oil companies, to end the destitution they are causing, to end the cost of living crisis.”